NEW YORK — A warm and sunny afternoon brought out around 150 protesters to the steps of New York’s City Hall to gain momentum for the March 21 immigration reform rally in Washington D.C.

The press conference, organized by the New York Immigration Coalition (NYIC), encompassed leaders of immigrant, ethnic, labor and faith communities from throughout the state. NYIC anticipates over ten thousand New Yorkers will attend the rally.

The rally in Washington. seeks to address the increase in deportations under the Obama administration, and the lack of immigration reform promised under the presidential campaign.

“There can be no more political double-talk,” said Chung-Wha Hong, executive director of NYIC. “March 21st is the deadline. Obama has to announce concrete steps towards immigration reform,” she said.

The steps of City Hall were decorated with signs reading “Change Takes Courage,” “Stop Deportations!” and “Reform not Raids,” among others. Protestors alternated between chants of “Yes We Can!” and “Si Se Puede!” Several of the leaders spoke only in Spanish.

Councilwoman Melissa Mark-Viverito echoed the sentiment, calling the current immigration policies “not only unjust, but inhumane.” She, along with Councilman Mathieu Eugene, will join the more than 200 buses that will descend on Washington on the 21st. 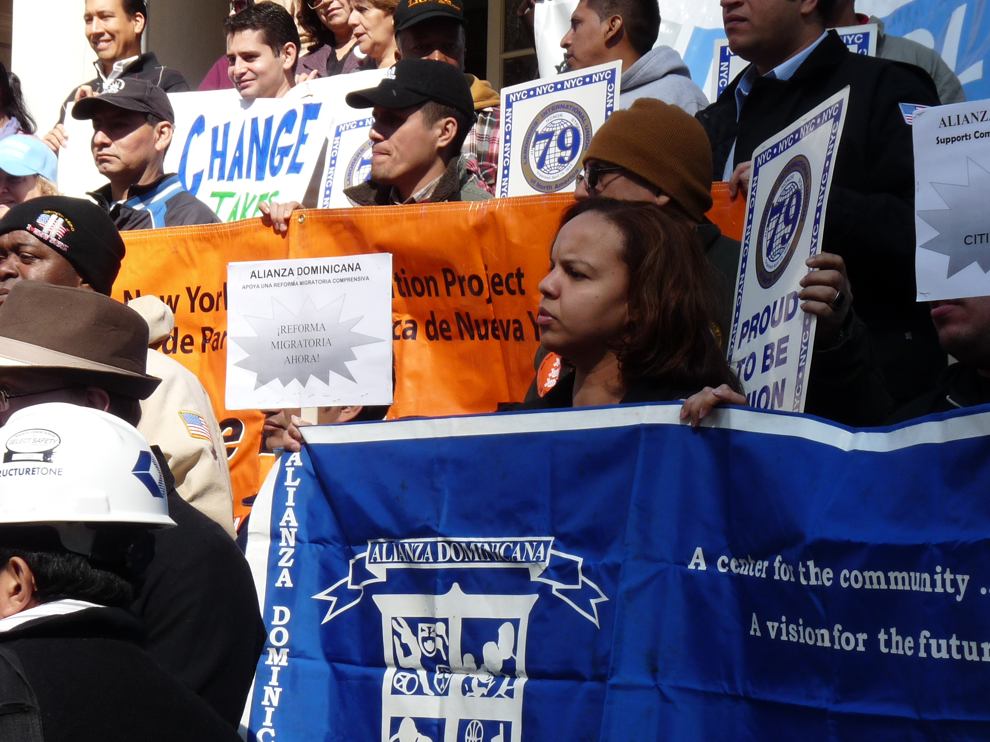 Community leaders represented organizations such as the African Imams Council, the Alianza Dominicana, the Organization of Chinese Americans (which now represents Asian PacificAmericans), Out4Immigration, a gay and lesbian immigrant grassroots group, and an interfaith network. A reverend from an Evangelical Latino organization said that immigration policy as it is “cannot stand. Promises have been broken,” he said.

Hong emphasized the diversity of the immigration cause, noting that the issue affects Latino, Asian, Arab and Russian immigrants. “Every day, hundreds of people are signing up in schools, church basements, union halls, and online,” she said. “We will not stand by while friends and family are subjected to deportation, home raids, and unfair wages.”

Members from local labor unions also attended the rally, including Anthony Williamson, a member of the executive board of Construction and General Building Local 79, who sparked the crowd and led their chants.

“This is the most historic moment,” Williamson said. “We organized over ten thousand laborers. This is the moment laborers will come together; this is the time to stop deportation and abuse.” Williamson said that his union alone is sending at least 500 union members and their families in 10 buses to the rally in Washington.

Williamson emphasized that immigration reform is key to aiding a struggling national economy. “It’s important in this dire economy to get these undocumented workers to be documented. There are thousands and thousands and thousands who are not paying taxes and it hurts the economy. [Immigrants] need to pay into our tax structure,” he said. “These brothers and sisters came to live the American dream, and they are part of the American dream.”

Haitians Under U.S. Treatment Are Often Separated From Families

America is a country of immigrants. People who came here have always been very hard working and determined to make a great name for this country and for themselves and surely thenceforth this country has become the greatest on earth. All people who came here made great sacrifices and worked harder than even the citizens and under very difficult circumstances and thus contributed even greater than the citizens for a better future for America and for themselves. No wonder this country has thence become the best in the world. To discourage immigrants, who are competing in a global economy and thus contributing even more than the citizens is thus detrimental to the continued greatness and prosperity of our country..

Henceforth recent studies conducted by experts and universities continue to show that legalizing the immigrants, who are not criminals or drug traffickers is in the best interest of our country’s economy and prosperity. A recent study conducted by Dr. Raúl Hinojosa-Ojeda for the Immigration Policy Center and the Center for American Progress, estimates that immigration reform would add at least $1.5 trillion in cumulative Gross Domestic Product to the U.S. economy over 10 years. Over the first three years alone, the higher personal incomes of new and newly legalized immigrant workers would generate enough consumer spending to support 750,000 to 900,000 jobs in the United States, as well as increased tax revenues of $4.5 billion to $5.4 billion

I thus think that passing of the comprehensive immigration reform immediately is in the best interest of Americans and our country. It will only continue to keep our country prosperous and great.

By the way I may also add that despite the current down economy, analysts point out that previous legislation in the 1980s was also passed in the midst of hard times. The Immigration Reform and Control Act of 1986 led to the legalization of 2.7 million “illegal” workers, but did not lead to greater unemployment. Wages also rose 15-20% in the following two decades, the study found. Data also suggests that a policy of mass deportation of migrants in the 1930s worsened the economic crisis.
It is thus plain commonsense that Comprehensive Immigration Reform be passed immediately to help continue to keep our country great and prosperous or else we could well start losing our greatness and prosperity in this Global Economy. It will also save the sufferings of many who are contributing greatly to our country’s progress.

Just who do these illegal aliens think they are? Yes. who? They are in this country iLLEGALLY and have NO RIGHT to demand anything! Go back to you your own country where you have EVERY RIGHT to make your demands! The American people a fed up with all these demands and protesting!

ENFORCE THE IMMIGRATION LAWS! NO AMNESTY!!! Get these illegal aiens out of here!

Hey, Fair Thinker. I thinker you are an idiot. Illegal aiens are destroying this Country and one would have to be almost blind not to see this.

Illegal aliens have made America the dumping ground for all their illegal alien children, then we have to school them and give them free medical care.

I for one, am sick and tired of these illegal aliens snubbing their nose at our immigration laws and the many other laws of this Country. If our Federal Government can not ENFORCE our immigration laws, and get these illegal aliens out of this Country, then let the States do it! One way or another, an end has to come to this illegal immigration, and not with AMNESTY! Amnesty will only encourage more illegal aliens to invade our Country and reward those who broke our laws and raped the American taxpayer in many ways…depressing our wages, taking our jobs, overwhelming our schools with their illegal alien children, driving without a license or car insurance, all the crime from stolen identities to rape, drugs and everything else.

ENFORCE THE LAW! NO AMNESTY FOR ILLEGAL ALIENS!

[…] read this comment posted from this site (which was not mentioned by the correction note, again!) Is Hassan Ali and Fair Thinker are the […]