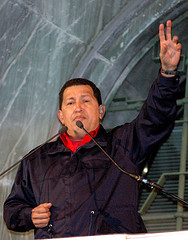 Judge Eloy Velasco of the National Court in Madrid has leveled charges of terrorism and conspiracy to commit murder against a Venezuelan government official and dozens of members of FARC and ETA.

Spanish authorities have asked Chávez’s government to extradite those accused, but so far Venezuela has has not responded to the international warrant.

The investigation began in March, when Velasco opened an investigation into Venezuela’s alleged links with the FARC and ETA. Soon after, Gen. Douglas Fraser, of the U.S. Southern Command, said the financial and logistical ties between the FARC and Venezuela were longstanding.

These new revelations, which have been investigated by Spanish officials in Colombia, Venezuela and France, have prompted the State Department’s assistant secretary for Western Hemisphere affairs Arturo Valenzuela to say that the Obama administration is “extremely concerned” about the situation.

Chávez has denied any links between Venezuela, FARC and ETA. This government does not endorse nor support any terrorist group,” Chávez said in March, according to the Washington Post. “We have nothing to explain to anyone.”

Jamaica Declares State of Emergency in Kingston Due To Drug Violence

Actually, U.S. military SouthCom commander Fraser first said that the U.S. had no evidence that Venezuela was supporting FARC narco-guerrillas or ETA terrorists, and then a few days later after massive whining by U.S. politicians, reversed his statement and said there was plenty of proof of such ties.

he is great man.