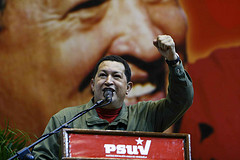 Top Story — The Venezuelan government seized 11 oil rigs owned by U.S. driller Helmerich & Payne, after the company shut them down because the state oil company was behind on payments.

However Helmerich & Payne said Venezuela never notified the company about any potential nationalization or expropriation of its rigs. The company also said it was in talks with Petróleos de Venezuela SA (PDVSA) and willing to enter new drilling contracts in the country.

“Our dispute with PDVSA has never been very complicated and our position has remained clear: We simply wanted to be paid for work already performed. We stated repeatedly we wanted to return to work, just not for free,” said President and Chief Executive Hans Helmerich, according to the Wall Street Journal.

The company said $43 million in invoices was due on the Venezuela rigs and that 14.2 million in currency devaluation related payments.

Minister Ramírez said that Helmerich & Payne’s halted work on the rigs was part of a plot to reduce crude production by sectors opposed to Chávez’s government.

“There’s a group of oil rig owners that has refused to discuss rates and services with PDVSA,” Ramírez said, according to the Financial Times. “This is specifically the case with Helmerich & Payne . . . We’re not going to allow them to sabotage our operations.”