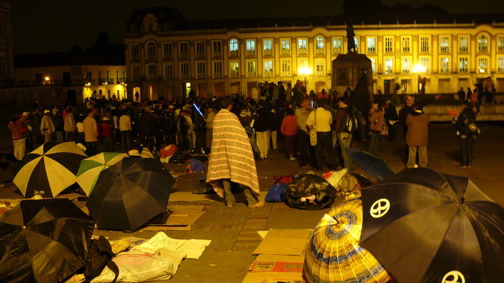 Displaced peasants protest before Colombia's Congress in 2009. Colombia has one of the largest internally displaced populations in the world.

An Afro-descendant community in northern Colombia is in danger of being displaced to make way for gold exploration, according to reports from Washington-based advocacy organizations.

The community at La Toma, in northern Cauca, faces eviction in accordance with a permit for mining exploration ceded by the Colombian government to a private individual in 2000. The community — which has historically supported itself in part by artisinal gold mining — sits on an area that has attracted interest from multinational mining companies, including Anglo Gold Ashanti and Consigo Resort, according to the Washington Office on Latin America (WOLA).

The community at La Toma disputes the validity of the permit, saying they were not consulted before the decision was made.

“This absurd and implausible expulsion is one more in a series of violations of our collective, cultural, social and economic rights,” the community association said in a statement.

In Colombia, both indigenous and Afro-descendant groups are entitled to permanent, non-transferable titles to communal land, according to the terms of the country’s 1991 Constitution — one of Latin America’s so-called “multicultural” constitutions which pledges to “recognize and protect the nation’s ethnic diversity.” Subsequent legislation requires authorities to consult with communities before taking decisions affecting communal lands.

But the Colombian Embassy says the community was not entitled to previous consultation because it has not established a legally recognized community council. Advocacy organizations say the community has established the council, but government has refused to recognize it in a timely manner.

Notwithstanding the community’s legal limbo, the exploration permit still faces challenges because environmental regulations prohibit the granting of mining concessions in areas where there are Afro-Colombian or indigenous communities.

“The eviction has been suspended indefinitely while the courts figure out whether the permit is legal,” said Claudia Cuevas at the Colombian Embassy in Washington. The expulsion had been scheduled for Aug. 18.

This is the second time the courts have ordered a suspension, but the community’s situation remains precarious. “The decision’s been postponed, but the government still has administrative orders against them for future eviction,” Gimena Sánchez of WOLA said.

The community says it has existed in the area since the days of slavery in Colombia, dating its founding at 1636. “In this territory lies part of who we are and the little that we have left after a long history of displacement,” the community’s statement says.

Colombia has one of the world’s largest displaced populations, with as many as 4.9 million as of 2009, according to the U.N. High Commissioner for Human Rights.

Most of the displacements are attributed to the violence of a half-decade long civil war that still rages in the Colombian countryside. But the conflict that has erupted between the Afro-Colombian community at La Toma and mining interests highlights that communities also face displacement for economic reasons.

The community at La Toma has also suffered violence and faced threats from right-wing paramilitaries, including the Black Eagles, a group that emerged from the ashes of the United Self-Defense Forces of Colombia (AUC, in Spanish) — the country’s largest paramilitary organization until its official demobilization in 2006.

In two separate incidents over the last year, residents of La Toma were killed in attacks that Sánchez of WOLA said were likely committed by paramilitaries.

The Washington Office on Latin America and more than 80 Colombian organizations have also received death threats in connection with their human rights work on behalf of Colombia’s displaced.

The murders and threats were condemned by Amnesty International, the Robert F. Kennedy Center for Justice and Human Rights and other watchdog groups.

This post has been corrected. An earlier version mistakenly included the Latin America Working Group among the groups who recently received a death threats for their work with Colombia’s displaced.

Lofty Goals and a Long Way to Go; Sex Work and HIV Remain Steady in the Caribbean

[…] An Afro-Colombian community is facing expulsion to make room for gold exploration. The eviction — originally scheduled for Aug. 18 — has been suspended by the courts twice, but the community’s situation remains precarious. Roque Planas has more. […]

Tragically, in the course of human civilization there is only one universal law: “Gold rules! “

My dear Cubanita, I thought you were going to say that at the end GOD rules, but I felt to see the L between your lines!

“In two separate incidents over the last year, residents of La Toma were killed in attacks that Sánchez of WOLA said were likely committed by paramilitaries.”

This reads like a WOLA press release. Did anyone at latindispatch do any.. you know… investigative journalism to determine facts?

[…] An Afro-Colombian community is facing expulsion to make room for gold exploration. The eviction — originally scheduled for Aug. 18 — has been suspended by the courts twice, but the community’s situation remains precarious. Roque Planas has more. […]

My name is Minister Mark McNeil author of “BYWORD” a book that address the miseducation of the children of slavery national identity, race, and the spiritual nature of their problemss.

I would encourgage the chidlren of slavery in America to connect the descendant of slaves in Colombia in addrressing their issues to their political representative.

Moreover, I am seeking to collobrate with Afro-Colombians in the USA and abroad to bring awarness to their issues in America and abroad.