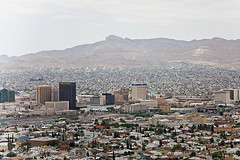 The border between El Paso, Texas and Juarez, Mexico

Luis Carlos Santiago,a photographer with the daily El Diario, was killed around two in the afternoon after gunmen opened fire on him and a coworker, Carlos Sánchez, in a parking lot while they were heading to lunch.

“We are shocked by this brutal attack against our colleagues,” said Carlos Lauría, the senior program coordinator for the Americas of the Committee to Protect Journalists. “In vast parts of Mexico, the media is under siege from criminal organizations. The Mexican federal government must immediately intervene in this crisis of national dimension. We urge President Felipe Calderón to make the protection of free expression a priority of his national agenda.”

Pedro Torres, El Diario’s director, said he did not know why these two journalists were targeted by the gunmen. Santiago had only recently started working for the paper and Sánchez is only an intern.

Sánchez is currently in serious condition at a local hospital.

Mexican officials said that the gunmen used 9mm handguns, but were unsure if the shooting was related to the drug trade.

Santiago is the ninth Mexican journalist to be killed this year, as cartels have begun to put pressure on news agencies to avoid unflattering stories about rival drug cartels.

Press freedom groups allege that Mexico does not do enough investigating violence against journalists.

A recent CPJ report said that in Mexico there are “systemic failures that if left unaddressed will further erode freedom of expression and the rule of law. Vital national and international interests are at stake.”

[…] drug cartels the question of what and what not to publish. The editorial was published only a day after the funeral of one its photographers, who was murdered during his lunch […]