Damage from the earthquake in Santiago, Chile.

Chile, This Week in Latin America 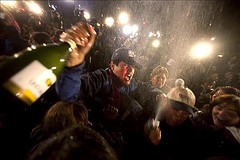 Chileans celebrating the rescue of the 33 miners.

Top Story — The 33 miners trapped underground for 69 days in Chile’s San José mine are now in the nearby Copiapo Regional Hospital, where doctors say are all the miners have responded well to treatment.

Three of the miners have already been released from the hospital and were taken away in a white car amid tight security on Thursday. The remaining men should be allowed to leave the hospital sometime on Friday.

Some of the miners have already undergone dental surgery and one of the them had pneumonia and is being treated with antibiotics. Experts worry that the most damaging part of their experience will be the mental and emotional problems that could arise.

On Wednesday, Chilean President Sebastián Piñera and his Bolivian counterpart Evo Morales visited the miners in the hospital, where they met Bolivian rescued miner Carlos Mamani. Morales was in Chile to to greet Mamani and propose that he return to Bolivia.

Morales told Mamani that he can return to Bolivia, where he will have a job.

Besides any future health complications, the miners also have to deal with numerous offers for their stories as well as a torrent of gifts including everything from iPods to Mediterranean tours. The men have reportedly vowed to share proceeds evenly.

Miner Edson Peña, who is a huge fan of Elvis Presley, has been invited  for a special tour of the rock legend’s Memphis home, Graceland.

When Graceland officials heard about Peña’s love for the Elvis’ music they sent him a boxed set of CDs and a picture of the “king,”  asking that it be lowered into the mine for Peña.

Dozens of Dogs Killed in Mexico at Hands of “Mataperros”