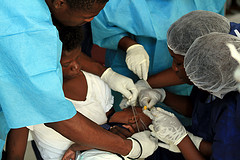 Top Story — The first known cases of cholera linked to the outbreak in Haiti were identified outside the country Wednesday, as a Florida woman contracted the disease while visiting family in Haiti’s Artibonite Valley and a Haitian construction worker who lives in the Dominican Republic brought the disease with him when he returned from Port-au-Prince.

The spread of the disease worries many public health specialists, who fear the illness that has left 1,110 people dead and 18,382 hospitalized could spread internationally.

News of the case caused panic in the Dominican Republic, with mats soaked in bleach being placed at the border entry between the two nations and health experts boarding Dominican-bound buses and inquiring if anyone is sick.

“Several weeks into this, we have just one imported case,” Dominican Health Minister Bautista Rojas Gómez said by phone from Santo Domingo, according to The Miami Herald. “If we stay vigilant, we should be able to have just isolated cases.”

Florida’s Department of Health is investigating several suspected cases of cholera throughout the state, but said they were not believed to be connected to the verified patient. The woman, who spent five days hospitalized with diarrhea and dehydration, is expected to make a full recovery.

“We are lucky in the state of Florida, and the U.S. generally, to have a very sound infrastructure for our food, water and sewage,” said Rob Hayes, spokesman for the Florida Department of Health, according to The New York Times. “With that in place, and with our aggressive public health practices, we are not concerned about this being a significant public health threat.”

Anti-United Nations protests continued in a more scaled tone in Haiti Wednesday, but a third demostrator was killed during clashes.

U.N. peacekeepers are being blamed for a number of shootings in the country’s second city of Cap-Haitien, as the protests continue into the third day. A spokesman for the U.N. mission to Haiti said that there were no exchanges of gun fire between U.N. troops and local residents and that local gang rivalry could be blamed for the gunshots.

At least five people had been admitted to hospital with gunshot wounds in Cap-Haitien, local doctors said.

“According to some residents, there has also been a body laid out in front of the U.N. office in Cap-Haitien, said to be of someone who was shot dead by U.N. peacekeepers,” Al Jazeera’s Cath Turner said.

[…] The cholera outbreak in Haiti appears to have broken the international borders and now has cases appearing in Florida and the Dominican Republic.  A woman who lives in Florida returned home to the US after visiting family in Haiti and carried cholera home with her.  Also, a construction worker for the Dominican Republic who had been working in Port-Au-Prince carried the illness back with him to DR.  These cases mark the first known spread of the Haitian cholera outbreak spreading outside Haiti.  More can be read on the newly diagnosed/spread cases here. […]