Alleged members of the Zetas gang and the Gulf Cartel 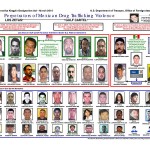 Alleged members of the Zetas gang and the Gulf Cartel

Top Story — Mexican authorities claim to have arrested another alleged drug cartel suspect tied to the killing of a U.S. immigration agent in February.

The Mexican Public Safety Department said that federal police detained Mario Jimenez Perez and 16 other suspects on March 5. Jimenez Perez, also known as “Mayito”, is an alleged financier of the Zetas drug cartel.

A statement by the Mexican Security Minister said that Jimenez Perez was captured Sunday in the central San Luis Potosi state and that he “has been linked to the murder of a US Immigration and Customs Enforcement (ICE) agent.”

The murder of ICE agent Jaime Zapata on February 15 created tension between Mexico and the U.S. and was one of the worst attacks on U.S. personnel in Mexico. The shooting prompted even some U.S. lawmakers to press for U.S. agents to be able to carry arms in Mexico.

The Zetas, formed by renegade special forces soldiers, were a paramilitary wing of the Gulf Cartel until they broke away last year in a violent struggle to secure control of  smuggling routes in northern Mexico. They are one of the most dangerous drug organizations operating in Mexico today, where more than 35,000 people have been killed since President Felipe Calderon launched an offensive on the cartels in late 2006.