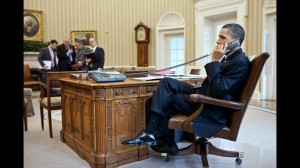 Top Story — U.S. President Barack Obama will start his trip to Latin America in Brazil later this week, despite the ongoing international crisis in the wake of the massive earthquake in Japan.

“The trip is on,” Obama spokesman Jay Carney said, according to The Associated Press. “You have to remember that economic growth in the United States is the president’s top priority, and this trip is very focused on economic opportunities for the United States and trade relationships.”

In Brazil, Obama will look to boost U.S. exports and expand other economic opportunities in one of the world’s emerging countries. Besides visiting Brazil, Obama will also make stops in Chile and El Salvador on a trip that will see him abroad from Saturday through the following Wednesday.

Obama heads to the region at a time of growing trade between U.S. and Central and South America, where U.S. exports to the area have grown 86 percent between 2004 and 2009 and are on track to double that in the next five years.

Obama has twice been forced to postpone foreign trips, once because of his effort to pass a health care bill and then because of the Gulf of Mexico oil disaster. Some critics wondered whether he might be forced to postpone this visit due to political wrangling in Washington, the natural disaster in Japan or the upheaval in the Libya, but White House officials said that he will be able to deal with all issues while abroad.

“He is the president of the United States. There are major issues all the time that a president has to contend with, which is one of the reasons why he has such a substantial support framework around him when he travels,” Carney said, according to AFP.