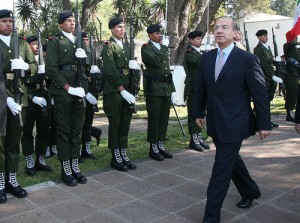 With the current session of Mexico’s Congress scheduled to expire Friday, members of Mexico’s House of Deputies have less than a week to deliberate over controversial changes to the country’s National Security Law that would give the President the power to deploy Mexico’s Armed Forces against broadly defined internal threats to Mexican national security.

The Mexican Senate has already approved the changes, but members of Mexico’s PRD, PT and Convergencia parties say that the 83-page initiative to change the law constitutes a threat to individual liberties and could create a state of exception in Mexico that would effectively put the country under military control.

The initiative, originally submitted by President Felipe Calderón to the Mexican Senate in April 2009, argues that the current National Security Law, established in 2005, fails to adequately define the role of the Armed Forces in regulating internal security, and says the proposed changes will help resolve ambiguity about the procedures for military intervention in Mexico’s internal affairs.

The initiative proposes that the Mexican military would serve “as a last resort, when the Council of National Security determines and the President of the Republic approves” to combat “cases or acts that constitute crimes against national security or impede the competent authorities (the Public Ministry and the Police under its command) to combat these crimes or any others whose consequences may imply risks, challenges, or threats.”

Members of Mexico’s PRI  and PAN parties argue that the initiative contains stipulations designed to preserve human rights protections and prevent military abuses.  “We think that with the modifications to the law, there will be much more certainty about what the Armed Forces can and can’t do; there will be much more protection for innocent citizens caught in the middle of this fight against organized crime, which cannot be halted for any reason.” said the PRI’s Jorge Carlos Ramírez, president of the House of Deputies.

However, members of the political opposition remain deeply skeptical of proposed changes to the law, which advocate, among other things, the monitoring and recording of private communication for intelligence-gathering purposes. Organizations such as Human Rights Watch have drawn attention to frequent abuses by the Mexican military and contend that there is a widespread systemic failure to prosecute human rights violations in Mexican military courts.

Jaime Cárdenas, a deputy from the PT (Partido del Trabajo), asked whether potential abuses by the armed forces would be prosecuted in military or civilian courts, an issue he said the initiative did not address. He also expressed concern that decisions about security made by Mexico’s National Security Council would not allow Congressional or citizen input. “Here we are are creating a fourth power. Technically, this decree constitutes a coup.”

On Monday, Mexican deputies debated the reforms in a three-hour meeting with no apparent resolution, concluding that members of the Junta de Coordinación Política (Jucopo) would meet Tuesday for further discussion.

If you put a rock in the path of a river will you stop it? Of course not – the river will flow around it, and the same is true of the cartels. Until we eliminate the $10 billion a year they make illegally selling marijuana in the U.S. they’ll ALWAYS find a way around every obstacle we put before them.

The ONLY way to stop the cartels is by eliminating the demand for their marijuana, and there’s only two ways to do that – either exterminate every man, woman and child in the U.S. or legalize the commercial production and sale of marijuana to adults with after-tax prices set too low for them to match.

After forty years of prohibition, it’s now obvious that we need legal adult marijuana sales in supermarkets, gas stations and pharmacies for exactly the same reason that we need legal alcohol and tobacco sales – to keep unscrupulous black-market criminals out of our neighborhoods and away from our children. Marijuana should be legal to sell to adults everywhere that alcohol and tobacco are sold.