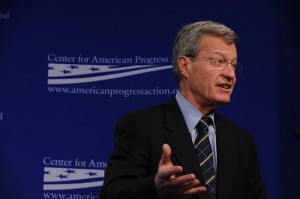 The head of the U.S. Senate’s Finance Committee said Wednesday that Congress is expected to pass a free trade agreement (FTA) with Colombia, despite strong opposition from the country’s largest labor group.

“We are now poised to approve our FTAs with Colombia, Panama and Korea,” Senate Finance Committee Chairman Max Baucus said during a hearing on the Colombia agreement.

Baucus, a Democrat from Montana, praised Colombia’s efforts to comply with a number of labor-related concerns brought up in an action plan by the Obama administration, including addressing the murder of trade unionists and other anti-labor violence in the country. Colombia is expected to complete its second round of labor-related issue requirements by June 15, which paves the way for the Obama administration to formally submit the accord to Congress.

“So let us work together to implement the Labor Action Plan,” said Baucus, who travelled to Colombia in February to meet with President Juan Manuel Santos. “Let us move forward quickly and approve the FTA.”

The AFL-CIO, the largest largest labor union in the U.S., staunchly opposes the FTA with Colombia.

“We feel given the horrific history in Colombia it is essential to see a period of time by which we can verify … that the murder rate is actually really going down, that we see a long-term commitment to battling impunity and that we see well-grounded sentences being produced by the Attorney General’s office. That is going to take time,” said Jeff Vogt, deputy director of the AFL-CIO labor federation’s international department to Reuters.

Baucaus tried to assuage labor concerns about U.S. workers losing jobs if the FTA is implemented by saying that it will need to be paired with aid to U.S. workers and would need to move “in tandem” with a trade adjustment assistance measure. The Trade Adjustment Assistance program (TAA), helps U.S workers who’ve lost their jobs because of foreign trade

“We’re not going to get one without the other and it behooves us to find ways to” do that, Baucus said at the hearing.

Some conservative members of Congress pressed officials from the Obama administration if they were insisting on pairing the two and worried about the cost of the TAA.

U.S. Secretary of State Hillary Rodham Clinton reiterated the Obama administrations plan to submit the FTA accord to Congress during the Washington Conference on the Americas Wednesday.

“With Colombia we have established an action plan to address concerns about labor rights, violence and impunity.  And Colombia has already taken important steps to implement this plan, and we are working hard to execute the next phase by June 15th,” Clinton said at the conference.

Besides Colombia, The U.S. has proposed FTA’s with Panama and South Korea.

[…] the TAA, the Obama administration has also been reluctant to pass the free trade deals to Congress until a number… – such as the murder of unionists – have been resolved. Colombia is expected to […]