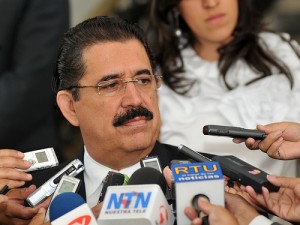 Top Story — Ousted Honduran President Manuel Zelaya may iron out an agreement to return to his home country within a matter of weeks, his aide Rasel Tomé said Wednesday.

“The day and hour that he will return has not been determined, but we will announce it publicly so that a massive number of people can welcome him at the airport,” said Juan Barahona of the pro-Zelaya National Popular Resistance Front.

The Honduran military removed Zelaya from power in June 2009 and sent him into exile. After a brief attempt to return to Honduras and retake the presidency, Zelaya accepted defeat and left for the Dominican Republic, where he currently lives.

The Honduran Supreme Court recently dropped corruption charges against the former president, making his return more likely. Zelaya’s aide Tomé said, however, that some issues remained unresolved. “First, the powers that be in Honduras need to agree to the setting up of a constituent assembly… and recognize the political movement in support of President Zelaya as a legitimate political party,” Tomé told the BBC.

Zelaya’s return would facilitate Honduras’ return to the Organization of American States (OAS).

The OAS suspended Honduras because of the coup in July 2009. After the interim government held elections in November 2009, bringing in the current Porfirio Lobo administration, the United States, Colombia and other countries recognized the new government. Secretary of State Hillary Clinton said at a conference in Washington Wednesday that the United States wanted to restore Honduras’ membership to the OAS.

But other countries in the Western Hemisphere, including Brazil, Venezuela and Argentina, say they want to see Zelaya return to Honduras before they’ll vote to let the country back into the OAS.

In related news, unknown assassins murdered Honduran television journalist Héctor Francisco Medina Polanco. Medina was shot while riding his motorcycle home from work on Tuesday and died Wednesday in a hospital in the town of San Pedro Sula.

Honduras has become one of the most dangerous countries in the world for journalists in recent years. Nine other journalists have been murdered since March 2010, according to the Committee to Protect Journalists.