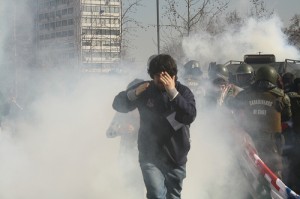 Chilean security forces use tear gas to control a protest in August 2010. Photo by cÁmARa AccióN.

Chile’s Carabineros resumed the use of  tear gas on Friday, a mere three days after Chilean Interior Minister Rodrigo Hinzpeter had called for its temporary suspension, as massive demonstrations against the HidroAysén dam project in Chilean Patagonia continue.

Although a study published by toxicologist Andrei Tchernitchin at the University of Chile warned that the use of gas CS, or chlorobenzylidene malonontrite, could lead to miscarriages and could harm children, Chile’s Ministry of the Interior disputed the claim in a report published Friday.

“Having carried out the promised studies, the tear gas used by the Carabineros, at the concentration they use, does not cause miscarriages or health problems, and as a consequence, as in many parts of the world, it can and should be used to maintain public order,” said Hinzpeter in a statement.

Although the Chilean government had initially announced that a study of the effects of tear gas could take up to three weeks, it concluded in just three days. According to Hinzpeter, the government consulted “different sources of information”, including Combined Tactical Systems, the U.S.-based tear gas manufacturer used by the Carabineros, to confirm that the gas did not cause miscarriages or long-term health problems.

The turnabout by the Chilean government coincided with Chilean President Sebastían Piñera’s annual national address on Saturday in Valparaíso, which is traditionally held every May 21. This year, the presidential address became the focus of protestors of the controversial HidroAysén hydroelectric project. The use of tear gas against protesters reportedly resumed on Friday night, shortly after the Interior Ministry informed Eduardo Gordon, General Director of the Carabineros, that the suspension on tear gas had been lifted.

Nonetheless, tens of thousands of Chileans demonstrated against HidroAysén project over the weekend in at least 27 Chilean cities, including Valparaíso. Environmental activists said the project to build a 1,400 mile power line and five hydroelectric dams on the Baker and Pascua rivers will flood 6,000 hectares (14,800 acres) of land and discard the use of alternative energy sources like solar, wind, and geothermal power. On Monday, the New York Times published an editorial criticizing the decision to approve the HidroAysén project, an investment by the Chilean branch of Spain’s Endesa corporation and Chile’s Colbún.

A spokesperson for HidroAysén, María Irene Soto, said the Times editorial made erroneous assumptions about the project. “They say we’ll have to clear-cut trees under the high-tension lines and it’s not true, we’ll only fell trees higher than 45 meters. There will be no razing of vegetation. In Argentine Patagonia there’s a project that inundates 45,000 hectares, ten times more, and it barely has any critics.”

[…] have seen alot more coverage of the struggle against the dam in Aysen, Chile than I have about another potentially environmentally devastating project in the Latin America that […]