Barack Obama in Puerto Rico during his 2008 presidential campaign. 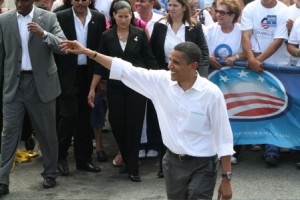 Barack Obama in Puerto Rico during his 2008 presidential campaign.

Puerto Rico’s governor announced Wednesday that U.S. President Barack Obama will visit the island next month, becoming the first president since John F. Kennedy to make an official visit to the territory.

“Since the beginning of my administration, we have been working in close collaboration with the president and his administration to make this historic visit a reality,” said Gov. Luis Fortuño of Puerto Rico.

Obama previously visited the island during his 2008 campaign and promised to return if elected president. He is expected to begin his visit on June 14.

“With his visit, President Obama will fulfill the commitment he made during the 2008 presidential primaries to return to Puerto Rico as president,” Fortuño said, according to USA Today. “Puerto Rico is now preparing to host its first official presidential visit since 1961, when President John F. Kennedy was greeted with great warmth and enthusiasm by the people of Puerto Rico. I’m sure the reception that President Obama will get this June 14 will be no less remarkable and productive.”

Obama is expected to discuss a White House report released in March analyzing the options for changing Puerto Rico’s relationship to the U.S. mainland and he may also visit projects that have benefited from his administration’s stimulus spending, according to Pedro Pierluisi, the island’s nonvoting representative in Congress.

The president’s visit may also help him win more favor among the four million Puerto Ricans who live on the U.S. mainland, concentrated in New York City and South Florida.

“I am certain that the 4 million Puerto Ricans who live on the mainland will be bursting with a real sense of ‘orgullo Boricua’ (Puerto Rican pride) when they see the respect that President Obama has shown to Puerto Rico,” said Andres W. López, a member of the Democratic National Committee from the island.

Puerto Rico is home to nearly four million U.S. citizens, but its residents are unable to vote in the general presidential election — only in the primaries. Gerald Ford was the last president to visit the island in 1976, but was there as a member of the Group of Seven economic summit, not on an official presidential visit.

[…] Puerto Rico is home to nearly four million U.S. citizens, but its residents are unable to vote in the general presidential election — only in the primaries. […]