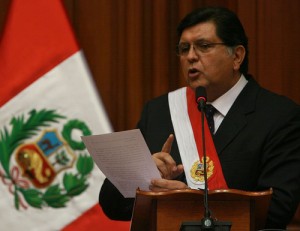 Humala, who recently beat Fujimori’s daughter Keiko in Peru’s presidential race, announced the possibility of freeing the country’s former strongman during an interview with the daily El Comercio.

“Nobody should die in prison, except people serving life sentences for abusing children,” he said, according to The BBC.

The 71-year old Fujimori is currently serving a 25-year sentence for his role in the murders of 25 people and the kidnappings of two others during his ten year presidency that ended in 2000. He was taken to a government hospital on June 9 after a drop in his body weight and is expected to remain there for a few days.

He underwent his fourth operation in January for lesions in his tongue and under Peruvian law, he can only be pardoned on health grounds.

While Humala mulls over the decesion to pardon Fujimori, current President Alán García may beat him to the punch, according to Peruvian journalist and political analyst Augusto Álvarez Rodrich.

García brought up the idea of pardoning Fujimori after the elections were over, saying that “it’s fine” to pardon him on humantarian grounds.

Álvarez suspects that García will carry out the pardon for Fujimori’s health, for political reconciliation and to show his own generosity.