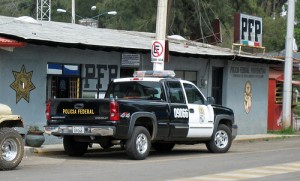 Mexican federal authorities apprehended Tuesday the alleged leader of the cult-like, quasi-Christian La Familia drug cartel and claim that his arrest is a major blow to the violent crime group operating in western Mexico.

José de Jesús Méndez Vargas, also known as El Chango, or “The Monkey,” was arrested in the central Mexican state of Aguascalientes at a federal police checkpoint. While authorities didn’t provide much information about his arrest they did say that Méndez was taken into custody without confrontation.

“With this arrest, what remained of the command structure of this criminal organization has been destroyed,” said federal security spokesman Alejandro Poiré.

La Familia has been reeling since its founder and leader Nazario Moreno González was killed in December after a two-day shootout with police in western Mexico. Méndez represented “the last remaining head of a criminal group responsible for homicides, kidnappings, extortion, corruption and even cowardly attacks on the authorities and civilian population,” Poiré said.

While La Familia took a major blow with the capture of Méndez, the leader of the cartel’s splinter group, the Knights Templar, still remains at large.

Mexican President Felipe Calderón praised the arrest of Méndez and called his capture a “big time” blow to organized crime in the country. The Mexican government had offered a $2.5 million reward for Méndez.

The U.S. Department of Justice spokeswoman, Laura Sweeney, did not comment on whether Méndez was wanted in the United States, but he is listed by the U.S. Department of the Treasury as a drug trafficker, which prohibits U.S. citizens from doing business with him or other members of La Familia.

Méndez was previously arrested nine years ago in connection to the murder of a rival gang member in the city of Apatzingan, but was released from custody. Mexico’s federal attorney general’s office did not explain to the news media why Méndez was released.

Méndez then went on to lead a a group of hit men for the Gulf cartel before La Familia’s came about four years ago when it rolled five severed heads into a Michoacán nightclub and vowed to protect citizens from rival cartels.

After Moreno was killed in December, La Familia splintered and Méndez allegedly led the main group until his arrest yesterday. Since the split, gunfights and clashes have erupted between La Familia and the Knights Templar in Michoacán, forcing almost 3,500 people to flee their hamlets in May.

Since 2006, when Mexican President Felipe Calderón began the military battle against organized crime almost 40,000 people have been killed and thousands more disappeared. However with Méndez’s arrest, 21 of the country’s 37 top drug traffickers have been apprehended or killed since 2009.

[…] up La Familia after it’s leader, Nazario Moreno Gonzalez, was killed in December and another leader, José de Jesús Méndez Vargas, was captured last month. However, violence continues in Michoacan as the Knights Templar battle with the Zetas cartel and […]