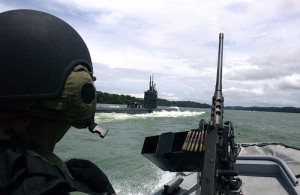 A secret agreement between the governments of Panama and the United States allows alleged drug traffickers caught in international waters to be “unofficially” brought to Panama before being sent to the United States, a U.S. diplomatic cable released by Wikileaks revealed.

Known as Panama Express, the agreement allows Panamanian authorities to pick up drug suspects off the country’s coast and bring them to shore before being extradited to the U.S. This system is meant to cut back on U.S. Coast Guard ships going off station for long periods of time and to save fuel.

The cable added that drug traffickers are more willing to cooperate with law enforcement if they know they could be sent to the U.S. Guatemala has a similar agreement with the U.S., the cable noted.

“This agreement is critical to the work of USG [United States Government] counter-narcotic operations which focus on stopping  drug shipments at sea,” said the cable, which is classified secret by former U.S. ambassador to Panama Barbara Stephenson and dated August 8, 2008. “The knowledge that these suspects are going straight to the U.S. also increases their disposition to cooperate with U.S. law enforcement  authorities.”

The leaked cable, entitled “Panamanian Security Cooperation: Irreplaceable?”, goes into great detail about Panama’s partnership with the U.S. in combating drug trafficking and surveilling Colombian guerrilla groups among other issues.

“Panama is one of the USG’s most important law enforcement and security partners in the Western Hemisphere,” according to the cable. “Panamanian cooperation allows the  USG to: search Panamanian flagged ships in international  waters, listen to the phone calls of drug dealers and FARC  Fronts, make direct drug seizures, fly counter drug missions over Panama’s strategic waters, and conduct the annual  Panamax military exercise, SouthCom’s largest and most  important security cooperation event in the region. ”

The Panamanian government has a Mutual Legal Assistance Treaty (MLAT) with the U.S., that allows for “creative techniques” that skirt the formal extradition process. Some of these techniques include the direct expulsion of persons of interest to the U.S. and Conditional  Release, where suspects under arrest in Panama on other charges are “lent” to the U.S. for prosecution.

“[Conditional Release]is  much faster than a formal extradition, and has proven so successful, that DEA sometimes designs operations to bring  suspects to Panama so they can be arrested in Panama and turned over to U.S. authorities quickly,” the cable noted.

In regards to Colombian guerrillas, the cable states that while it is well known that the Revolutionary Armed Forces of Colombia (FARC, in Spanish) have incurred on Panama’s heavily-forested, southern Darién province, the group also has a logistical base in Panama City.

According to the cable, the FARC is not a major concern to Panama and the government traditionally has allowed a “live and let live” policy with the guerrilla group. However, Panama does not have the capability to combat the FARC and the U.S. sees a need to form a “Frontier Force” in the Darién.

“The FARC is not a major concern of the  Panamanian people, however, who see the Darien as very  remote, and are more focused on the day-to-day crime in their  neighborhoods,” according to the cable. “There is little political gain in taking on the FARC publicly, and much to be lost. GOP [Government of Panama] may fear an aggressive campaign against the FARC could lead to a showdown in the Darien to which the GOP would, with current forces, lose. ”

The cable ends by saying that while Panama is viewed as “a middle income country,” which should pay for its own programs, cutting aid hurts the U.S. more than Panama. Due to rises in street crime and pressure from the public to put more money into social programs, if aid were cut the Panamanian government would divert its resource away from fighting drug trafficking.

“What this cable aims to show is that most of these programs serve our interests more than Panamanian interests,” The cable said. “The GOP  should invest more money in its own defense, and we encourage them to do so. But given that our programs generally extend homeland security out from the U.S. border to Panama’s, we should be realistic about the need to provide continued  funding if we hope to retain the robust cooperation we currently enjoy. ”

A 30-Year Quest for Justice in Peru