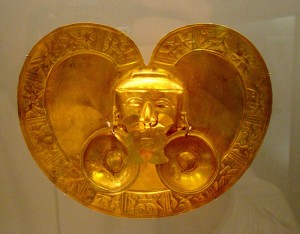 Gold fever is sweeping across South America. Nowhere is it more lethal than in Colombia, where the gold rush has become a new axle in Colombia’s civil war.

Turf wars are erupting between paramilitaries and leftist rebel groups who are fighting to take control of mining regions. It is fuelling an old ideological conflict that has displaced thousands of people.

Helicopter raids by the Colombian army on small community mining collectives have become commonplace and the Colombian government is accused of targeting poor workers to protect big business interests and committing human rights violations with impunity.

Thousands have fled their homes where land is violently contested and others live in fear that they will be removed from their land, arrested or killed.

The multinationals are flooding in too. With gold now worth around $1,500 an ounce, everyone is getting in on the act, including North American mining companies. Colombia’s pro-business mentality has seen arbitrary concessions by the state sold to multinational companies, often on indigenous land.

Fault Lines travelled to Colombia to speak to the people caught in the middle – the rural workers and artisan miners who have mined for generations, and some whose ancestors were enslaved during the first gold rush centuries ago. Others are former coca farmers, put out of work by the U.S.-led Plan Colombia.