A Cuban doctor administers a vaccination to a displaced Haitian woman. 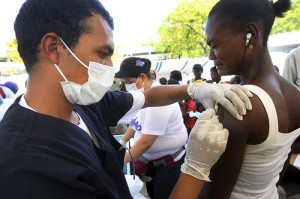 A Cuban doctor administers a vaccination to a displaced Haitian woman.

Cuban doctors working in poor regions of Venezuela face miserable working conditions, inadequate medical supplies and the fear of constantly being monitored by co-workers, according to a leaked U.S. diplomatic cable.

Working in Venezuela as part of a social mission sponsored by Hugo Chávez’s government entitled Barrio Adentro, the Cuban doctors have brought a litany of complaints to the U.S. embassy in Caracas. Some of the doctors had their passports taken from the them upon entering the country for fear that they would flee and others had to pay exorbitant bribes to customs officials in order to leave Venezuela.

“I feel politically manipulated. The system is closing my chances and I want to be a better professional. I have a lack of  equipment and medicine in my job. I want to be a free man. I want to be a surgeon specialist,” said one unnamed Cuban doctor in the cable, which is dated April of 2009.

As part of Barrio Adentro and other social welfare programs set up by the Venezuelan government, the doctors were conscripted to work in city slums or impoverished rural communities. Some of the doctor’s said they were forced by Cuban authorities to go to Venezuela for one to three years service.

While in Venezuela the doctors said they worked with inadequate supplies, were paid around $300 a month and saw almost 300 patients a week. While there were no reports of physical abuse, the medical professionals did say they suffered from psychological abuse.

“They are always watching us, checking in with us at random times, asking what we are doing and calling us on our cell phones,” One of the unnamed doctors said in the cable. “It is a psychological battle that we must endure every day.”

Barrio Adentro officials also allegedly confiscated many of the doctor’s passports when they arrived in Venezuela in an attempt to thwart them from fleeing or seeking asylum. Whether this was known to Cuban officials or other Venezuelan officials is not said in the cable.

Some of the doctors who did attempt seek asylum in others countries were detained and others had to pay bribes of around $1,000 to Venezuelan customs officials when attempting to flee to Miami. The cable notes that one Cuban couple, who received visas from the U.S. embassy, were made to pay $4,600 in bribes before being detained and told they would be deported to Cuba.

The couple escaped the hotel where they were detained and went into hiding.

In August of 2006, the U.S. government created the Cuban Medical Professional Parole program (CMPP), which encourages Cuban doctors to defect and helps them fly to Miami. In one of the most high profile defections, seven Cuban doctors who left for the U.S. sued Cuba, Venezuela and the oil compnay PDVSA for what they considered a conspiracy to force them to work like “modern slaves.”

The U.S. Embassy in Caracas approved 79 Cuban doctors for asylum in the U.S. in 2009. 39 doctors successfully boarded flights from Caracas to Miami, while others had to wait for their finances to improve or were sent back to Cuba, the cable noted.

Since Fidel Castro took power in Cuba in 1959, doctors from the island have been sent all over the world – primarily in Latin America and Africa – to provide medical care in developing nations. The doctors, who most recently were sent to earthquake-ravaged Haiti, are seen by many as one of the country’s most important human resources.

These cuban health care workers, whether voluntarily or not, assist the Cuban communist regime to slowly impose its will on Venezuela and steal their wealth.
They all need to go back to their island prison

Steal wealth from who? Haven’t you figured out that Chávez and Castro work together? Get your facts straight and remember that what you read in your local papers and reality are two very different things. Both countries are run by despicable people that chastise and use fear on the populations in order to do their will.

I suppose why the tyrant continues to win elections with over 60% of the electorate and the previous elections before the last it was close to 70%.
And then of course that tyrant former President Carter would go and say something like: “these are one of freest and democratic elections I’ve witnessed in Latin America.

Now the one’s sponsored by the US State Department in Honduras………..now there you have the epitome of free elections. Guarantees the dispossession of the poor from their homes while the wealthy own 90% of the land.

With the US getting out of Iraq and possibly Afghanistan one wonders when they will have their 18k+ merceneries in Columbia and 7900 Marines in Costa Rica start the war in Venezuela.
Another war of freedom with US puppets waiting in Miami to be installed at the opportune time and then called a Democracy their henchmen that do the bidding for their US masters.