Mourners in the aftermath of the 1997 Acteal massacre. 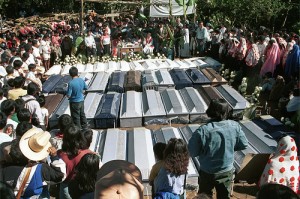 Mourners in the aftermath of the 1997 Acteal massacre.

Family members and survivors of the 1997 attack in the Mexican state of Chiapas that killed 45 indigenous people sued former President Ernesto Zedillo for his alleged complicity in the massacre.

The 53-page lawsuit obtained by CNN states that the massacre in the village of Acteal was part of an alleged plan called Chiapas 94, which hoped to bring an end to the insurgency of the Zapatista Army of National Liberation (EZLN) in southern Mexico. The slaughter occurred on December 22, 1997 when a group of men entered the village and killed 45 people, including weapon and children.

“The mourners have been frustrated in their efforts to hold government accountable for the slaughter of Acteal,” said a document released the Miami law firm Rafferty Kobert Tenenholtz Bounds & Hess, who are representing the 10 relatives of the Acteal victims.

While Mexican officials claim that the attack was triggered over land disputes between residents of two Tzotzil ethnic communities, the survivors and relatives of those killed claim that the motive for the attack was political and that government officials provided both weapons and training to a conservative armed civilian force in an effort to wipe out the Zapatistas.

The suit also alleges that Zedillo’s administration stopped peace talks and moved militarily against the Zapatistas because a report by a U.S. bank linked Mexico’s then-problematic economy to instability in the poor southern state of Chiapas.

Along with Zedillo, the suit also implicates former Attorney General Jorge Madrazo Cuéllar in covering up the massacre and the government’s role in the events.

After the massacre, Zedillo issued a statement denouncing the Acteal massacre as a criminal act of violence and called for an investigation by the Mexican government and the country’s National Human Rights Commission. “Those who participated in the planning and execution of this crime must receive the full rigor of the law, regardless of their social, political or religious condition, since nothing can justify the atrocity which they have committed,” he said in 1997.

Zedillo, who was president of Mexico from 1994 to 2000, is currently the director of the Center for the Study of Globalization and a professor of international economics and politics at Yale University. He lives in the U.S. state of Connecticut, where the suit was filed.

The 10 relatives, who wish to remain anonymous because of fear of retribution, are suing for compensatory and punitive damages.