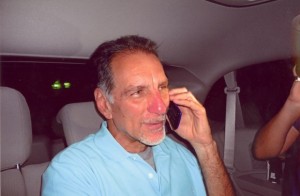 René González speaks to his wife on the phone shortly after being released from prison on Friday. (CubaDebate)

A group of U.S. celebrities including Danny Glover, Susan Sarandon and Pete Seeger called on President Barack Obama Monday to send a Cuban agent who was released from prison on Friday back to his homeland.

The agent, René González, served 13 years of a 15-year sentence for spying, but must spend another three years in the United States on probation before he can return to Cuba. He is one of the so-called “Cuban Five” — a group of Cuban agents jailed for espionage, but whom the Cuban government insists were defending the island from extremist exile groups in South Florida.

Actors and Artists United for the Freedom of the Cuban Five said in a letter dated Oct. 10 that the group was “deeply concerned” about the South Florida District Court’s decision to require González to remain in the country after serving his sentence.

“Not only is the order that he serve an additional three years of parole in the United States extraordinary and punitive, it is the kind of gratuitous insult that further aggravates the unnecessary tension between the U.S. and Cuba,” the letter says.

“Further, the life of Mr. González would be in danger if he has to remain in the United States due to the existence in this country of dangerous organizations whose entire mission is premised on the violent overthrow of the Cuban government,” the letter continues. (The full text is available below.)

Many observers view the fate of the Cuban Five as linked to that of jailed U.S. subcontractor Alan Gross, who is serving a 15-year sentence for a conviction of violating Cuban sovereignty. The Cuban authorities arrested Gross in December 2009 for distributing satellite communications equipment under a U.S. Aid program, which is illegal in Cuba.

Obama began his term by loosening restrictions on travel and remittances that the George W. Bush administration had tightened, but Gross’ conviction chilled U.S.-Cuba relations once more.

Unofficial U.S. mediators including Jimmy Carter and Bill Richardson have tried to discuss the case with the Castro government, but have not convinced Cuban authorities to pardon Gross on humanitarian grounds.

In a recent interview with The New York Times, however, Cuban Foreign Minister Bruno Rodríguez hinted that the Castro government might release Gross if the Obama administration would take similar action with the Cuban Five.

“I do not see any way in which we can move on towards a solution of the Mr. Gross case but from a humanitarian point of view and on the basis of reciprocity,” Rodríguez said.

Mr. Gross had a receipt to bring this equipment into Cuba and the Cuban Government knew this very well (see article below). There is also testimony that the Jewish Community knew of his work (see article below) and that he had been there many times. I also want to point out that the International Press was not allowed inside the courtroom (see article below) on any of his proceedings! Dont you think that there is a BIG difference on the case of the Cuban 5 and Mr. Gross.

The equipment is illegal in Cuba without government permission, but a source close to the case told CNN that “at trial, the defense presented a receipt from Cuban Customs to demonstrate the Cubans were both aware of and approved what Alan brought in.”

“The Cuban government did not charge Alan with bringing illegal equipment,” says the source, who also spoke on condition of anonymity. “The charge and conviction were on crimes against the state, in other words, activity to undermine the sovereignty of Cuba, which is simply preposterous.”

Miller is the first member of Cuba’s small Jewish community to admit knowing and talking to Gross.”I know the person. I know exactly the person you’re referring to,” he said in a phone conversation with CBS.”I met him at the Jewish community [the building housing Beth Shalom Temple, known as the Patronato, the largest Jewish community center in the country]. He came there more than once,” Miller said responding to questions.Adela Dworin, who took over as president of the Temple following the death of Miller’s grandfather Jose Miller in 2006, had denied knowing Gross when asked shortly after the American’s arrest in December 2009. More recently she told reporters that so many Americans come to the Temple, she simply didn’t know if he had been one of them.Miller said he won’t speak on camera until after the trial, adding, “Let me tell you, the solution to the problem is coming very soon. It’s complicated. It’s hard even for me.”
http://www.cbsnews.com/stories/2011/02/24/501364/main20036259.shtml

BLOCK: Now, foreign journalists, I understand, are not allowed into the courtroom to cover the trial. You were outside the courthouse today. What were you able to learn there?

MIROFF: That’s right. He’s being tried in a small municipal courthouse far away from the city center. Gross is there with his wife, his U.S. attorney, his Cuban attorney and U.S. consular officials. And the Cuban media, the state-run media is being allowed in and that may be a sign that the proceedings are going to show up on television soon. I think in some ways it’s not just Gross that’s on trial, it’s also the entire USAID program here in Cuba that the government wants to prosecute.

THE CUBAN 5 WERE TRIED AND THEIR CASE WENT TO THE SUPREME COURT AND WAS DENIED!
At their trial, evidence was presented that the Five infiltrated the Miami-based Cuban exile group Brothers to the Rescue, obtained employment at the Key West Naval Air Station in order to send the Cuban government reports about the base, and had attempted to penetrate the Miami facility of US Southern Command.[2] On February 24, 1996, two Brothers to the Rescue aircraft were shot down by Cuban military jets in international airspace while flying away from Cuban airspace, killing the four US citizens aboard.[2] One of the Five, Gerardo Hernández, was convicted of conspiracy to commit murder for supplying information to the Cuban government which according to the prosecution led to the shootdown. The Court of Appeals has, however, reversed the conviction on the conspiracy to commit murder, since there is no evidence that Hernández knew the shootdown would occur in international airspace.[2]

For their part, Cuba acknowledges that the five men were intelligence agents, but says they were spying on Miami’s Cuban exile community, not the U.S. government.[3] Cuba contends that the men were sent to South Florida in the wake of several terrorist bombings in Havana allegedly masterminded by anti-communist militant Luis Posada Carriles, a former Central Intelligence Agency operative.[3][4]

The Five appealed their convictions and the alleged lack of fairness in their trial has received substantial international criticism.[5] A three-judge panel of the 11th U.S. Circuit Court of Appeals in Atlanta overturned the spies’ convictions in 2005, citing the “prejudices” of Miami’s anti-Castro Cubans, but the full court later reversed the five’s bid for a new trial and reinstated the original convictions.[3] In June 2009 the US Supreme Court declined to review the case.[6] In Cuba, the Five are viewed as national heroes and portrayed as having sacrificed their liberty in the defense of their country.[
http://en.wikipedia.org/wiki/Cuban_Five

Thanks for sharing, Humberto, we appreciate it. To answer your question, whether or not the two cases are comparable, I think it’s fair to say that in the future we will see them linked for the purposes of diplomacy between the United States and Cuba. The Latin America News Dispatch will continue to follow developments in both Gross’ case and that of the Cuban Five. Best, Roque