Mexcian President Felipe Calderón speaking at the annoucement of Provictima. 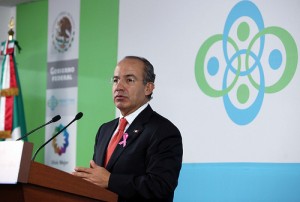 Mexcian President Felipe Calderón speaking at the annoucement of Provictima.

Human rights activists filed a criminal complaint with the International Criminal Court at the Hague against Mexican President Felipe Calderón for his alleged role in the commission of war crimes and crimes against humanity since declaring war on the country’s drug traffickers in 2006.

The activists, which include academics, journalists, lawyers and intellectuals, garnered 20,000 signatures and allege that Calderón’s war against organized crime constantly violates the rights of the population. Besides Calderón, the activists also filed complaints against some of Mexico’s military commanders and drug traffickers.

“Mexico is a state of emergency and the humanitarian crisis it is going through is the most dramatic in recent history,” the plaintiffs said, according to the Mexican political magazine Proceso.

The group – headed by Epigmenio Ibarra, the president of Argos Comunicación, John M. Ackerman of the Institute for Legal Research of UNAM and Edgardo Buscaglia, a lawyer and researcher at the United Nations – said Mexicans face a constant violation of human rights, particularly directed toward vulnerable groups such as women and migrants who are victimized by both the authorities and organized crime.

“We also live with a structural situation of impunity in which only 12 percent of crimes are reported and 8 percent are investigated,” the group said, according to Proceso. “The lack of autonomy of the Attorney General’s Office and the federal executive’s immunity has created a situation where it is virtually impossible to judge within the nation the civil and military officials for their part in this humanitarian crisis. ”

The human rights activists are expected to hold a press conference sometime on Tuesday to officially announce the details of the complaint. They are asking Luis Moreno Ocampo, the head of the ICC, to begin an investigation into the situation in Mexico and into Calderón, Mexico’s secretaries of Public Security, National Defense and the Navy as well as Sinaloa cartel boss Joaquín “El Chapo” Guzmán.

Speaking on Monday at the opening of the newly created Social Office for Victims of Crime, Calderón said that he was concerned with the large number of people missing in recent years due to the drug war. He added that one of the problems with tracking down the disappeared was that information was scattered between many different agencies.

“I am concerned that the number of missing persons in the country is very high, and that much of this information is scattered in different agencies,” he said, according to El Nuevo Herald.

Last month, Rodrigo Escobar, the Rapporteur for Mexico for the Inter-American Commission on Human Rights, said he had received complaints of more than 5,000 reports of disappearances. Escobar said that the complaints were filed with Mexico’s National Human Rights Commission and that he also received reports of an increase of forced disappearance, but no specific data was available.

Since 2006, when Calderón began his offensive against drug traffickers, it is believed that between 35,000 and 50,000 people have been killed in Mexico in violence related to the conflict.

TO WHOM IT MAY CONCERN:

Both my ranches in Col San Antonio Las Minas were raiding by a cabal of Mexican Army troop, Federal Agents, State and local police and anyone hanging about wearing a gun, badge and tabasco sauce.

The upshot of this exercise was a sub-procaduria handcuffing me while a Army NCO butt-stroked me with the stock of a M-16!

I was thrown in jail and indicted 7 times! Four of the charges were dismissed and I was exonerated on a fifth and sixth count. I went to trial on the 7th charge, was acquitted and the Federales appealed to Mexacali where I was subsequently found “innocent” again. The State then had a go at me, and after 2 1/2 years of signing my name on Wednesdays and Fridays and afterward, Fridays for a year, ALL CHARGES WHERE EITHER QUASHED OR DISMISSED.

Mexico is NOT a Democratic Republic — Mexico is an amalgam of a NARCOCRACY mixed with a KLEPTOCRACY!

Please take the liberty of adding my name to any class action suit.