This article was co-published with NACLA.

Bep’kororoti Payakan, better known as Paulinho Paiakan, was an influential leader and an important voice in Brazil’s Indigenous movement. Paiakan had no official birth certificate but was about 68 years old at his time of passing.

He was a member of the Mebengokre people, better known as Kayapó, who live in the Xingu river basin in the Brazilian states of Mato Grosso and Pará. Famous for their leading role in the Indigenous movement, the Kayapó only had their first contact with the Brazilian government in the 1950s.

As a teenager, he became one of the first Kayapó to speak Portuguese fluently. His grasp of the language and knowledge of the world outside the village solidified his role as a communicator and mediator between Indigenous groups and whites. FUNAI (Brazil’s National Indigenous Foundation) hired Paiakan in 1972 to assist the federal government in communicating with the Amazon’s Indigenous communities and facilitate public works in the area.

“I grew up and wanted to see the world,” he said in a January interview during the Meeting of the Mebengokre Peoples and Brazilian Indigenous Leaders. “I wanted to leave the tribe to learn and have the means to help my people.”

Paiakan ventured out into the world and became a powerful voice for saving the Amazon. 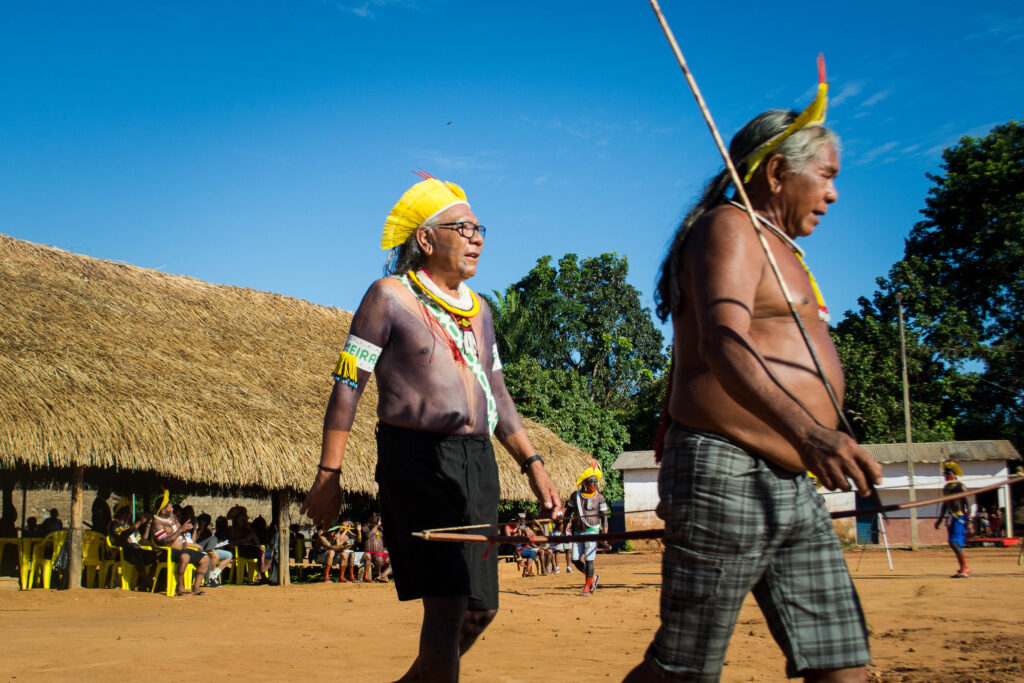 Paulinho Paiakan (left) during the Meeting of the Mebengokre Peoples and Brazilian Indigenous Leader in January 2020 (Photo: Rafael Forsetto).

Paiakan made his name in national politics during Brazil’s transition to democracy in the 1980s. In 1987, a Constituent Assembly began drafting the country’s new Magna Carta. The Indigenous movement seized the opportunity. Leaders such as Paulinho Paiakan, Raoni Metuktire, and Ailton Krenak mobilized Indigenous peoples to demand the inclusion of Indigenous rights in the new Constitution. Their efforts drew international attention and resulted in the inclusion of their rights in the Brazilian Constitution of 1988.

Indigenous groups, international activists and even celebrities supported Paiakan. In 1989, public attention turned to Altamira in the Brazilian state of Pará, where Paiakan organized the First Meeting of the Indigenous Peoples of the Xingu. The meeting served to oppose the construction of the Belo Monte Hydroelectric Dam, which threatened Indigenous lands and the environment.

The intense plea once again drew international attention. The World Bank, one of the project’s main investors, withdrew its support for the dam’s construction due to Indigenous protests and international backing from famous activists including Sting.

Always innovative, Paiakan collaborated with The Body Shop, an organic cosmetics company based in the United Kingdom. He introduced sustainable production of Brazil-nut oil in the Kayapó villages. He believed that these projects helped reduce deforestation in the region.

In 1992, Brazil prepared to host the United Nations’ Conference on Environment and Development, better known as Rio 92. Paulinho Paiakan was at the height of his popularity and was one of the most awaited speakers at the event.

However, just a few weeks before the conference, Paiakan and his wife Irekran were accused of attacking and raping Silvia Leticia Ferreira da Luz, an 18-year-old student from Pará. The rumors surrounding the crime were shocking, alleging cannibalism in additional to sexual assault. Veja, one of Brazil’s most popular magazines, made the infamous case their cover story, featuring a photo of Paiakan under the headline “The Savage.”

The controversy split public opinion. Some condemned Paiakan while others defended his innocence, declaring that private interests wanted to silence the Indigenous leader. As Brazil’s media outlets slammed Paiakan, newspapers such as the Los Angeles Times questioned the accusations and cited the possible involvement of political enemies behind the case.

Ultimately, the couple was not prosecuted for rape due to lack of evidence. In a second hearing, Paiakan was found guilty of indecent assault, which was still being disputed in Brazil’s Supreme Court at the time of his death. To this day, debates continue over the Indigenous leader’s innocence in the crime. The controversial case irreparably stained Paiakan’s reputation and turned him into a recluse. He returned to his village with his family and moved away from the spotlight.

Two decades after the accusations, Paiakan returned to activism. In 2012, he spoke at Rio +20, the United Nations Conference on Sustainable Development. Most recently, he was a leading speaker in the Meeting of the Mebengokre Peoples and Brazilian Indigenous Leaders this January.

In an interview in January, he told me how deeply the hostilities of Brazil’s current government worried him. Paiakan lived in the city for many years and sought integration with the “white man.” Through his experiences, he has become wary over the years and affirms that Indigenous people should be careful with those who want to become too close. 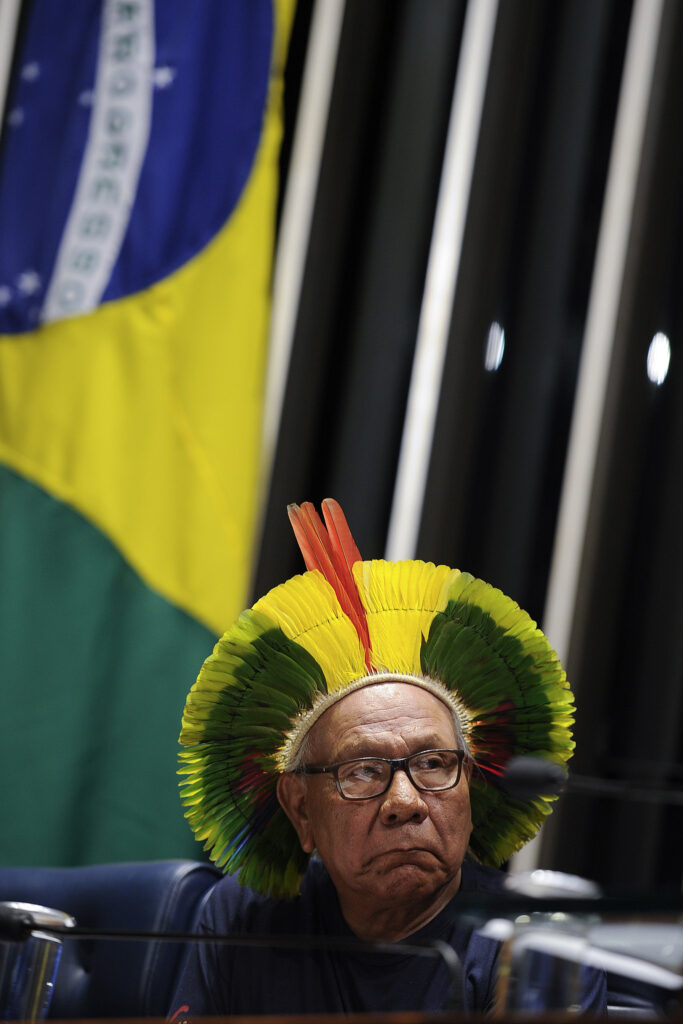 “There are Indigenous relatives who speak well, like white men. They’re the ones that are being dangerous to our people. They want to be friends with the current government and hand their people over to them,” Paiakan said. “The government wants to repeat what happened in 1500,” referring to the year the Portuguese arrived to what is now Brazil, and the devastation that followed for the Indigenous population.

Over the years, President Jair Bolsonaro has been a staunch critic of policies regarding Indigenous peoples in Brazil, famously stating that there’s “a lot of land for few Indians.” Indigenous groups’ rights have faltered under Bolsonaro. The increased deforestation during his government impacts them directly.

“What this government is doing is destroying the world,” Paiakan said. “[They are] causing contamination, pollution, forest fires, smoke, deforestation and destruction. These are threats against the world.”

Paiakan’s death is a great loss for Brazil’s Indigenous communities, which are being devastated by COVID-19. He is the latest victim of the virus that has killed over 300 Indigenous Brazilians since March. Indigenous communities are especially vulnerable when it comes to COVID-19 and have a higher mortality rate than the national average. Some of the most affected tribes, such as the Yanomami and Kokama, are located in the state of Amazonas, which faces one of the country’s worst Coronavirus outbreaks.

Brazil currently has the world’s second highest COVID-19 death toll. As Jair Bolsonaro suffers international scrutiny for his weak response, the controversies pile up. The country’s Ministry of Health has been accused of withholding data on suspected cases and deaths.

Paulinho Paiakan’s life has been scrutinized throughout the years and debates over his legacy are sure to continue. Regardless, his impact is undeniable. Paiakan helped Indigenous peoples win their legal rights in Brazil and gain international recognition. As a hostile government and environmental degradation threaten the gains of Brazil’s Indigenous movements, another guardian of the forest has been lost.

Rafael Forsetto is a journalist and international affairs analyst focusing on social and environmental topics. Currently based in Curitiba, Brazil.