A group of visitors to the ESMA museum (Photo courtesy of ESMA).

BUENOS AIRES—Flights arriving to Buenos Aires from the north careen over the gray immensity of De La Plata River. Just before reaching the skyscrapers of the Argentinian capital, they are flying over a piece of human rights history in Latin America: the former Navy Mechanical School, known as ESMA for its acronym in Spanish. ESMA is home to a museum that now seeks to be recognized as a UNESCO World Heritage site.

If there is a place capable of summarizing the human rights abuses of Latin American dictatorships and the successes of historical memory policies, ESMA Memory Site Museum might be the one. The same place where, between 1976 and 1983 during Argentina’s dictatorship, people were killed, babies were stolen, and drugged prisoners were thrown into the sea, has been an emblem for human rights since 2004. In many ways, it is the survivors themselves who have re-signified the space.

From guided visits to live music to theater to festivals, a seven-acre concentration camp in the most expensive zone of Buenos Aires, which was once synonymous with death and suffering, was slowly transformed through social and political will into an emblem for life and collective consciousness. The oppression experienced at ESMA has triggered a movement that changed Argentinian subjectivity and the human rights struggle worldwide.

“ESMA has evidence of a systematic plan of disappearances,” says museum director Alejandra Naftal. “Kidnappings were planned here, security forces carried out massive killings, and babies born in captivity were given to the dictatorship’s inner circle. This was done by dictatorships throughout Latin America, but in ESMA you can tell how that process was sustained from the beginning to the end,” she says.

Someone who experienced that darkness firsthand is Ana Testa, who was 30 years old in 1977, when she was kidnapped with her three-year-old daughter by dictatorship commandos. She endured eight months at ESMA, then Argentina’s biggest concentration camp. Soldiers took her daughter to her parents’ home a week after the kidnapping.

“Anyone who has been in a clandestine detention and extermination center knows what corporal torture is. They tied my hands and feet to a rickety bed and electrocuted me with a prod. They placed the tip of the prod on my eyelids, in my armpits, in my vagina. It was a week of continuous sessions with intervals of three hours,” Testa said in one of her many testimonies before judges and the press. 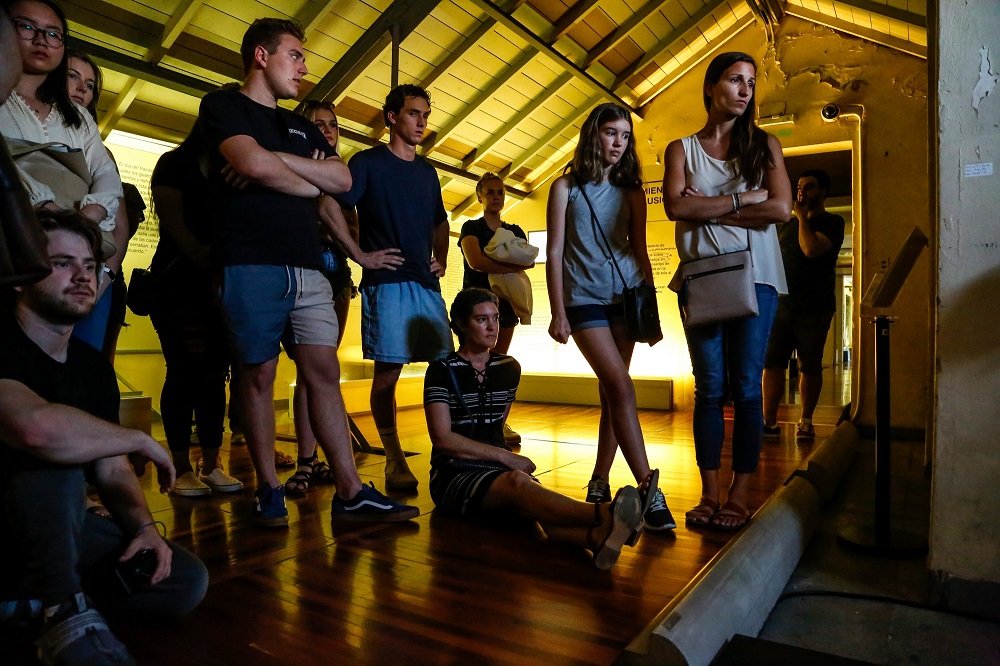 For Testa, the Museum becoming a World Heritage Site would mean two major achievements for human rights awareness and ending hatred. Visiting the Memory and Human Rights Space, renamed in 2004, changes forever the perception of human rights for every visitor. When those visitors are middle and high school students, the effects are touching: “They enter the Museum’s door as simple youngsters and leave totally different,” she says.

“It is radically different having the teacher at school explaining ‘On March 24, 1976 there was a coup…’ to actually entering to the very same place where history happened,” highlighted the now 63-year-old architect. “Entering and feeling they are inside history awakens youngsters and they leave the buildings with a thousand questions… …And that is because facts are featured in a raw and, at the same, time deeply respectful way.”

Testa’s conception of “entering inside history” manifests differently for each visitor. But anyone who moves through ESMA’s facilities, through some of the rooms keeping the darkest stories they might ever hear, will never forget the sounds, silences, and images of what this part of the world had to endure.

“When you enter ESMA you suffer a disorientation that comes from the contrast,” says Italian scholar Daniele Salerno, a researcher on cultural memory and LGBT activism at European Union the Marie Sklodowska-Curie project. “The beauty of nature surrounding the place and the simplicity of ESMA’s internal architectural structures conflicts with the idea that this was the scene of one of the most atrocious horrors of the last century.”

“Some clear days in Buenos Aires, the ESMA horizon might appears particularly beautiful. Trees and nature transmit serenity, while the city convulses around it. But the faces of the disappeared looking out from the entrance of the officers’ restaurant tell us how the surface may be deceptive,” says Salerno.

For Salnero, who is a collaborator on Utrecht’s university “Remembering Activism” project, finding himself alone at the “Capucha,” the upper level of the building in which tortured prisoners were kept blinded and chained, was disturbing. But it also illuminated the value of the museum: “The emptiness of the rooms increases this disorientation effect and the guides’ narrative reconstruction of what is not seen. Then you realize why this whole place is extremely important. It is helping us perceive and transmit memory,” he says.

But the lesson ESMA has given to him has more to do with life outside its facilities. “On my last visit in 2020, I visited an exhibition by a young artist who critically reconstructs and appropriates the memory of her missing grandmother, who she never knew,” he says. “Each visit connects us to the past and, at the same time, encourage us to think, mobilize and fight for the future.”

Building the past to ensure the future

“Our museum shows the pacific ways through which we are reaching truth and justice,” says director Naftal, who also survived detention under the dictatorship when she was only a teenager. “At the moment Argentina has put 680 people who committed genocide and torture in jail in part because several ESMA survivors told their stories during legal trials with almost no comparison in crimes-against-humankind’s history.”

Those trials, says Naftal, are “the other pillar that makes this Museum so valuable in present time.” Unlike almost any country since Nuremberg trials, Argentina was able to judge the dictatorship criminals within its borders and under its legal framework after the so-called “impunity laws” were annulled in 2003.

“This postulation is important to spread ESMA’s importance but also to protect it from political changes, like the ones we have experienced during the last years,” says Naftal. “The previous government did not have human rights in their agenda, and we suffered due to that.” 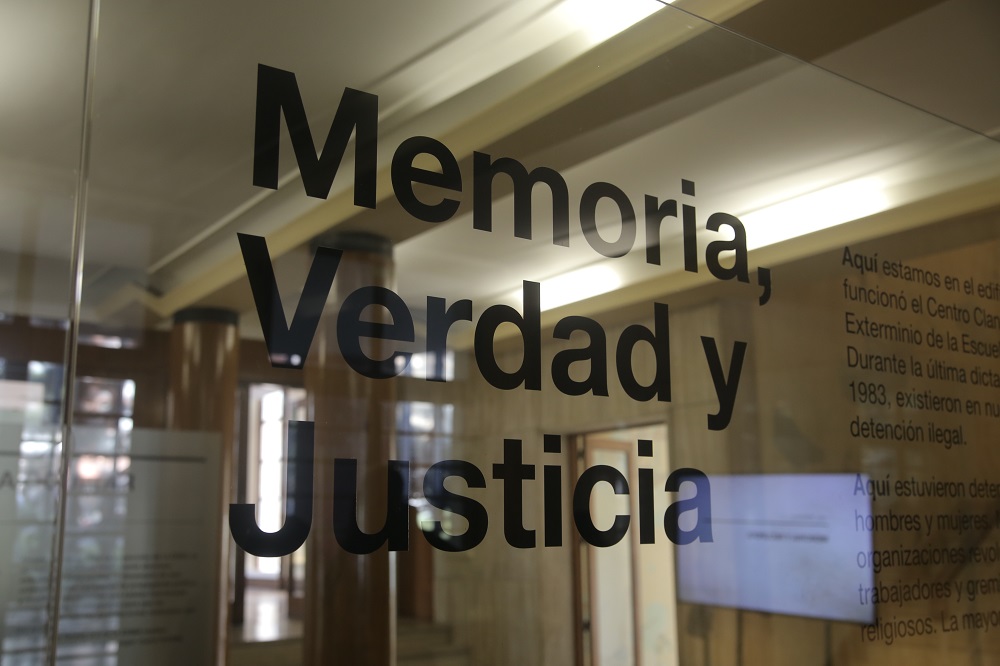 A window inside ESMA Memory Site Museum with the words “Memory, Truth, and Justice” (Photo: CIDH/Flickr).

Naftal refers to a recent struggle to protect human rights gains in Argentina. In 2017, Argentina’s Supreme Court, whose brand-new president was installed with government’s political and legislative support, issued a ruling that would have allowed many people convicted for crimes during the dictatorship to be released. Rallies were held across Argentina to protest the legal maneuver and, in less than 24 hours, the 20-page ruling was over-ruled by Congress. If Argentinians had not taken the streets, many of ESMA’s murderers would now be free.

Museum director Naftal, who was illegally detained by the dictatorship when she was 17, knows they have to remain vigilant. “What we see at ESMA is the tip of the iceberg of more than 600 camps and centers run by the Argentinian dictatorship. Since those places were across the whole country, we can show the world that in Argentina there was a systematic plan of extermination,” she says.

As this article goes to press, ESMA Memory Site Museum continues a long road started three years ago when, amid the most adverse context since the 1983 return of democracy, dictatorship criminals were about to be released. It is still a long way until September 2021 when, ESMA may be integrated to the UNESCO World Heritage List. Nevertheless, the Museum’s team is now working in their next step: getting the support of as many academic centers of the world as they can.

Until their day comes, Alejandra Naftal says their work continues. “We must create a pedagogy of memory. This is about memorialization but is also about constituting these spaces as educational tools to strengthen the current notion of democracy in the world,” she says. “You always tend to believe the past is quiet. But it is dynamic.”

Juan José Relmucao is Buenos Aires based correspondent at Vice en Español and a contributor to Atlas Obscura and Remezcla.

Falling Oil Prices, a Curse for Venezuela, May Benefit Argentina

Amazon Wildfires On Track for Another Record-Breaking Year