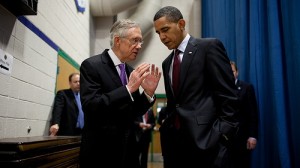 The DREAM Act amendment, introduced by Senate Majority Leader Harry Reid (D-Nev.), was proposed as an attachment to the National Defense Authorization Act. The Senate voted 56-43 to stall the bill’s passage.

The bill also contained a clause repealing the “Don’t Ask, Don’t Tell” measure for gays in the military.

Last week, President Obama promised a crowd of over 3,000 guests at the Congressional Hispanic Caucus Institute annual gala that he will “do whatever it takes to support CHC’s efforts” to pass the DREAM Act.

“I’ve got a stack of letters in my office with the most heart-wrenching stories of these dreamers,” said Reid on the Senate floor. “I want them to understand this isn’t the end of this. We’re going to continue to move on…All we wanted to do is bring it to the floor. They didn’t have the courage to allow us to have a vote on this.”

The GOP unanimously voted not to proceed with the military appropriations’ passage. Two Democratic Senators also voted against it.

Republican Senators attacked the amendment, characterizing it as political manipulation. Senator John McCain (R-Ariz.) told reporters the act was a last-minute attempt to gain the appeal of Latino voters before November.

“This is a cynical ploy to try to galvanize and energize their base in case of the Hispanic vote,” said McCain, while stating that President Obama’s popularity has dropped dramatically with Hispanics.

Senator Lindsey Graham (R-S.C.), who has proposed changing the 14th amendment to withhold citizenship rights from children born to undocumented parents, reiterated that the amendment is superfluous to military affairs.

“When you’re putting the DREAM Act, which has got absolutely nothing to do with our national security, on the defense bill to try to score political points, this offends me,” said Graham. “The defense bill should be focused on trying to win this war.”

Graham added that there is no indication the DREAM Act will increase military recruitment, and said that the U.S. Department of Defense has high recruitment and retention rates.

Others disagreed with Graham’s assessment. During a teleconference on Sept. 17, high-ranking former military officials expressed their support for the amendment’s passage.

Louis Caldera, former Secretary of the Army, cited numerous instances where recruiters told him they had turned away promising candidates because of their immigration status.

Retired Lieutenant Colonel Margaret Stock, formerly in the Military Police Corps, said “The demographics for the future are not looking very bright. What we’re looking at is the expansion of the recruiting pool in the future and we do expect the Armed Forces are going to have difficulty finding people.”

Major General Alfred Valenzuela, who was the highest-ranking active duty Latino officer before he retired in 2004, added that persons without legal status have a higher interest in serving than the average American, and said their retention rates are also above average.

Graham said he felt sorry for the students who were protesting, some of whom had visited his office.

“I felt really bad because I think they’re being used and abused,” he said. “What am I going to tell people from South Carolina when I legalize 2 million people here because it sounds emotionally good and I haven’t secured the border.”

Although optimistic about their chances, the repeal of the amendment still shook several DREAM Act supporters to tears.

“For you maybe this was a vote. You negotiated…but for me this is my life,” said Maria Rodriguez, youth organizer of the Coalition for Humane Immigrant Rights of Los Angeles. “Being undocumented is an imposed identity, it’s an identity imposed by a government so that you could be exploitable, marginalized, disenfranchised. You feel less human.”

Rodriguez, who was undocumented 10 years ago, concluded that she was frustrated, but she isn’t going to give up fighting.

“The fact that we can hear and see and be so close to the people who make decisions, but still feel so powerless…I think is what brings me to tears.”

The DREAM Act has been filed in Congres several times since 2001, but only went to a vote as a standalone bill once in 2007.

[…] Other Top News: The Senate voted to stall the DREAM Act on Tuesday, which had been inserted as an amendment to the defense appropriations bill. Latin America News Dispatch contributor Raisa Camargo reports from Washington. […]

[…] appearance will come just days after the DREAM Act amendment, which would provide undocumented youth a chance to attain legal residency, stalled in […]

[…] stall, once again, the DREAM Act, an amendment to provide undocumented youth a chance to attain legal residency in the […]

Under the Bush Administration, when the Republicans had control of the House and Senate – as do the Democrats today – the GOP leadership agreed to take a stand and propose the Dream Act as a Stand Alone legislation but did not receive overwhelming response from the DNC.

Well, this HOPE team is deported more undocumented immigrants in 2009 then the so called racist GOP – http://www.budurl.com/Deported

This HOPE team plans to deport another 400,000 undocumented immigrants in 2010 – http://www.budurl.com/horsesmouth – twice as many as the racist GOP administration of Bush.

And of course, instead of the great fanfare deportations of masses highlighted on FOX, CBS, NBC, CNN and other media outlets orchestrated by the war monger Bush – Obama chooses the stealth mode.

You see the Obama Administration has launched “Silent Raids” profiling mid-size employers hiring Latinos by having the Department of Labor challenge the hiring practices of selected employers. Once this employer receives notification of this internal review – mysteriously the Latino employees begin to SILENTLY quit.

This is the actions of the HOPE team with a desire to appease the Latino voters with a last minute propaganda bill pulling on the hearts of minor children wanting to go to college in this country.