Inside the Church of Our Lady of Guadalupe. Image by Romeo Guzman. 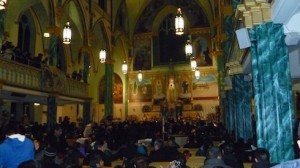 Inside the Church of Our Lady of Guadalupe. Image by Romeo Guzman.

Towards the end of Dec. 11. and the beginning of Dec. 12, Mexicans on both sides of the U.S.-Mexico border congregate at their local Catholic church to celebrate the birth of the Virgin of Guadalupe. Also known as the “Queen of Mexico” and “Patroness of the Americas, ” she is said to have appeared to Juan Diego, a indigenous peasant, on the hill of Tepeyac, near Mexico City, on Dec. 9, 1531.

Since then, La Virgen De Guadalupe (as she is known in Mexico) has played an important role for Mexicans of all walks of life. During the struggle for Independence and the Mexican Revolution those that fought with Father Miguel Hidalgo or Emiliano Zapata carried banners and wore badges that bore her image. Today, migrants ask her to protect them on their perilous journey to “El Norte,” Mexican-Americans adorn their body with her image, and countless others ask her for miracles and to protect their loved ones.

This year, Mexicans from the Bronx, Queens, Brooklyn, and Manhattan covered the sidewalk between 7th and 8th avenues on 14th  street to enter Church of Our Lady of Guadalupe. As we made our way to the Church, we passed numerous taco trucks, individuals selling tamales, atole, rosaries, and, of course, flowers and roses for La Virgen.

“Roses for five dollars, Roses for La Virgen, just five dollars,” and “one dollar, one dollar for the Rosary, just one dollar” competed with cars honking, the police shouting instructions, a few scattered conversations, and the gentle-but-persistent sound of rain hitting the asphalt, New York Yankee hats, and a handful of umbrellas. While there were families with young children, teenagers, and couples in their early twenties, the majority of Guadalupanos (followers of La Virgen de Guadalupe) were males in their late twenties and thirties. José, for example, sells rosaries out of a black plastic bag, and arrived to New York City from Honduras about a year ago. When the police don’t confiscate his goods for vending without a license, he sells them on the street. 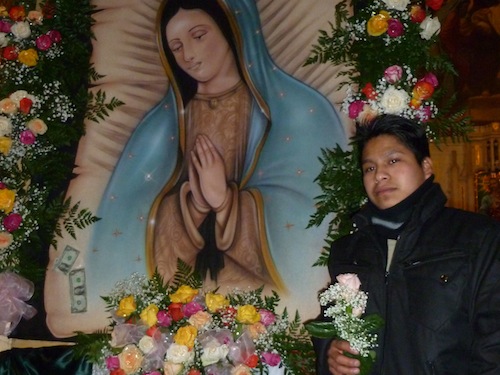 A young man stands beside the image of the Virgen de Guadalupe. Image by Romeo Guzman.

The four men I found myself walking with work in a restaurant in upper Manhattan. Two of them live in Queens, the other two in Harlem. They proudly and jokingly told me they were from Nezahualcoyotl, a neighborhood on the outskirts of Mexico City. “We’re Chilangos. Yeah, yeah, you should check your wallet.” “Don’t worry, I’ve been checking it the whole time” I replied. We all laughed and continued walking. When I made small talk about being from Los Angeles and hating the winter and the Mexican food in New York City the oldest one said, “Oh man, you are in for it, it’s not even cold yet. About the food though, don’t worry, just go to Roosevelt and 80th, there you’ll find bad, mediocre, and good Mexican food.”

As we got closer to the steps of the Church and to La Virgen, we heard the priest proclaim, “Que Viva la Virgen!” (“Long live the Virgin!”) to which the audience responded “Viva!” followed by “Que Viva México!” — which received an equally enthusiastic “Viva.”

Those on top of the steps took out their cameras and photographed the crowd on the sidewalk, or at least as much as their camera could capture. Those photographing and waiting quickly turned their attention to the arrival of large white truck, which was followed by young males who carried a 10-by-six-foot banner of La Virgen and rode or walked their lowrider bicycles. They belong to “Firme Rydaz,” a bike club made up of Mexicans born in Mexico and in the United States. This is the fifth year that they walk La Virgen and their bikes from 192nd street in the Bronx to 14th street. They walk to honor la Virgen and in the words of Manuel, the main organizer, to “continue with tradition, because we don’t want it to be lost.”

As La Virgen entered the Church and made her way to the altar she was warmly greeted with the song “Himno Guadalupano.” We all joined in narrating the story of La Virgen’s appearance to Juan Diego and proudly proclaimed its last phrase: “for Mexicans, to be a Guadalupano, is essential.” When I finally arrived to the altar, I placed my roses at the bottom of the banner made and brought by “Firme Rydaz” and asked La Virgen to watch over my buddy, my carnalito.

Chileans Go To the Polls for a Presidential Election Tomorrow