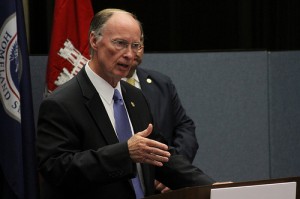 Republican Governor of Alabama Robert Bentley Thursday signed a law cracking down on illegal immigration that many in the news media are describing as the nation’s toughest.

The law instructs police to check the immigration status of anyone they stop if they suspect the person of being an undocumented immigrant. The provision mirrors the controversial SB 1070 that pit the state of Arizona against the U.S. federal government in a legal dispute that has yet to be resolved.

But the Alabama law goes further. The bill also requires public schools to determine students’ immigration status and requires employers to use E-Verify to check potential employees’ immigration status. It criminalizes the act of “harboring” or renting property to undocumented immigrants. It even criminalizes giving an undocumented immigrant a ride.

“We have a real problem with illegal immigration in this country,” Bentley said after approving the law, Reuters reported. “I campaigned for the toughest immigration laws, and I’m proud of the Legislature for working tirelessly to create the strongest immigration bill in the country.”

But opponents say they will challenge the law, which they view as discriminatory.

“This is clearly unconstitutional. It’s mean-spirited, racist and we think a court will enjoin it,” said Mary Bauer of the Southern Poverty Law Center, which plans to file a lawsuit before Sept. 1, when the law is scheduled to take place.

“They’re doing to them the same thing they did to former slaves. They brought us here to do a job nobody else could do. So now they’re through with you, they’re ready to get you out of the country,” Representative Mary Moore of the Alabama State House told CNN.

The Mexican Secretariat for Foreign Relations said it “lamented” the law’s passing, noting that it “potentially affects the human and civil rights of those Mexicans who live in or visit that entity (Alabama).”

The Alabama law goes much further than Arizona’s SB 1070, making it reasonable to suspect the Obama administration will challenge HB 5 in the courts.

The piece of the Alabama law requiring public schools to show proof of immigration status may also prompt a reaction from the the federal government. A May 6 letter issued jointly by the civil rights divisions of the Justice Department and the Education Department to the country’s school districts said checking students’ immigration status was against federal law.

“Recently, we have become aware of student enrollment practices that may chill or discourage the participation, or lead to the exclusion, of students based on their or their parents’ or guardians’ actual or perceived citizenship or immigration status,” the letter reads. “These practices contravene federal law.”

The Alabama law does not prohibit undocumented children from attending public schools, but requires the schools to assess their status and compile data to determine what effect the presence of undocumented immigrants has on the quality of education in the state.

Some 3.9 percent of Alabama’s 4.8 million people identified as Hispanic according to the 2010 census.