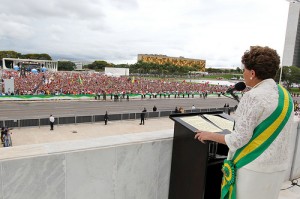 A poll by Datafolha released over the weekend found that Rousseff’s popularity jumped to 49 percent — up from 47 percent when the last Datafolha poll was taken in March.

The rise might not seem like much, but it occurred just as Rousseff confronted her first major scandal since taking office in January. Her chief of staff, Antonio Palocci, resigned last week after A Folha de São Paulo touched off a media frenzy when the paper reported on May 15 that Palocci’s assets multiplied 20 times between 2006 and 2010.

The earnings came from Palocci’s consulting firm Project A, which he ran while working as a congressman, leading Rousseff’s campaign and serving as her chief of staff after her election. The revelation exposed Palocci to allegations of corruption, though the attorney general’s office said it did not find enough evidence to charge him with a crime.

Palocci, a leftwing politician who evolved into a voice for Brazil’s private sector, was one of the most powerful figures in the Rousseff administration and well-liked by Wall Street.

Rousseff also accepted on Friday the resignation of Luiz Sérgio, the minister responsible for relations between her administration and Congress. Some of Rousseff’s allies complained Sérgio did not effectively manage differences among the 10 parties that form the ruling coalition. Analysts think Rousseff may have pushed him out in order to improve relations with the PMDB, one of the most important parties in the coalition and that of Vice President Michel Temer, according to Reuters.

Rousseff’s popularity also seems unaffected by continued inflation. The current rate stands at 6.5 percent, according to The Wall Street Journal — one percentage point up from last year.

Democrat leaders requested an investigation into DEA-led operations in Mexico