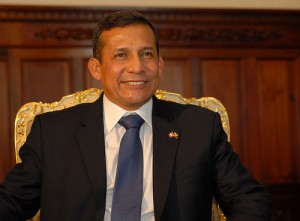 Peruvian President-elect Ollanta Humala is one his way to the United States for a number of  high-profile meetings Wednesday in Washington D.C.

Peruvian media outlets and other news sources, however, are reporting that Humala will not meet with Obama during his visit to the U.S.

During his meeting with Clinton, Humala is expected discuss bilateral ties and joint efforts between the U.S. and Peru to combat drug trafficking. Peru may soon take over the title of world’s top coca producer from Colombia, according to a report released by the United Nations (UN).

In 2006, his visa was revoked on political grounds as there was suspicion of Humala’s involvement in his brother’s failed military uprising against then President Alejandro Toledo. Information about that incident was revealed in leaked diplomatic cable released by Wikileaks.

During his previous political campaigns, Humala took a strong anti-U.S. stance and aligned himself closely Venezuelan President Hugo Chávez. However, in his last campaign and since becoming president-elect, the nationalist former military man has toned down his rhetoric and added that he would continue Peru’s controversial free trade agreement with the U.S. signed by current president Alán García.

Humala is traveling with his wife, Nadine Heredia, and will pass through Miami before making his way to Washington D.C.

A scheduled trip to Venezuela was recently postponed because of the health problems plaguing President Hugo Chávez.