RIO DE JANEIRO-  Two of the most important steps to prevent the spread of the novel coronavirus are washing your hands and practicing social distancing. But for Brazil’s poorest, following those guidelines is nearly impossible.

“The mayor sent cars notifying us that we should wash our hands with soap, and stay at home for the next few days,” said  Tamires Paulino, a resident of Morro dos Macacos. Paulino lives with her five children in Rio’s second biggest favela.

“But how does he expect us to wash our hands if we don’t even have water? Some of us receive soap donations, but you can’t really wash your hands only with soap,” she said.

The threat of the coronavirus to Brazil’s low-income communities has hit home in recent days. Rio de Janeiro’s first victim of the coronavirus was a 63-year-old housekeeper who worked in Leblon, one of the most exclusive neighborhoods in the country. The woman contracted the virus after her boss arrived from Italy and was waiting for her test results.

President Jair Bolsonaro compared the virus to a “small flu” on live television on March 24. In the same speech, he urged people to go back to work and said the mainstream media in Brazil was promoting hysteria. During the address, Brazilians banged pots and pans from their windows as a form of protest. In Brazil, the pandemic has already led to 77 deaths and 2,985 confirmed cases.

On March 22, the virus had reached at least four favelas in Rio de Janeiro. By March 26, Rio de Janeiro reported 421 cases and six deaths. The struggle to prevent the spread of the coronavirus has directed attention to places where the state is often absent. Residents of favelas are stepping in, educating their neighbors and addressing chronic problems, like water shortages, that will exacerbate the virus. 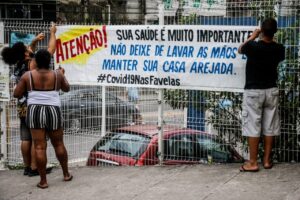 “It took awhile for people in favelas to realize that the coronavirus was indeed an issue for them as well,” said Stella Moraes the founder of Anjos da Tia Stellinha, or Angels of Aunt Stellinha, an NGO that assists families that depend on federal welfare in Morro dos Macacos in northern Rio.

“Most mothers I work with kept telling me that this was a rich people’s disease since they are the ones who travel,” she said. “Well, now they know it affects everyone.”

Residents doubt that the government understands the full scope of the problem.

“I know at least ten suspected cases that haven’t been counted only in the community where I live,” Tatiana Viana, a resident of Morro dos Macacos, told LAND. “It is questionable if the released numbers correspond to the reality of Rio de Janeiro and Brazil.”

The situation is especially concerning because favelas usually lack open spaces. In the tightly packed neighborhoods, every square meter must be used. Most “barracos” or shacks have only a single room. It is common for several generations of a family to live together, since they do not earn enough to live in separate spaces.

This arrangement makes social distancing impossible for favela residents. Due to the lack of space between the so-called “casas de caminho,” twinned houses located in alleys, fresh air does not circulate. These are favorable circumstances for the virus to spread.

The most concerning infrastructure problem is the lack of water. Although some favelas have access to water that comes from the streets down the hill, crowded favelas face challenges to distribute water throughout the entire community. Most residents tap into the main water pipes coming into the neighborhood. But this means pumps are often compromised. When the overloaded water supply system stops working, it is to the detriment of the entire community. 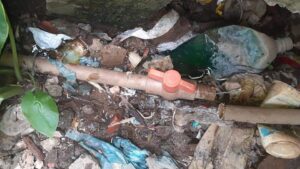 An exposed water pipe located in the middle of the trash responsible for water supply in a house in Morro dos Macacos.

“These are the moments where we feel completely abandoned by the state,” said Viana. “I am self-employed and my money comes directly from the work I do each day. I have to go to the supermarket three times a week. It’s a huge privilege to go only once [to stock up]. Here we live day by day.”

LAND contacted CEDAE, the State Company responsible for water and sewer services, for comment on this story. The next day, CEDAE sent a team to one area of Morro dos Macacos to fix water pumps. Now, more members of the community have access to water despite the pump’s low pressure. Washing their hands will be a little easier.

A study by the Locomotiva Institute/Data Favela found that seven out of ten families that live in favelas throughout Brazil have had their income affected because of the crisis. Moreover, the same study also shows that 47 percent of favela residents are self-employed or informal workers.

Brazil’s Health Minister said on March 20th that COVID-19 is likely to cause a collapse in the health system. According to Dr. Guilherme Werneck, an epidemiologist at Rio de Janeiro’s State University, the number of beds in Rio de Janeiro is not enough to treat a pandemic.

“The biggest issue right now is the underfunding of the Sistema Único de Saúde,” or Unified Health System (SUS), said Dr. Werneck. The Brazilian universal healthcare system is one of the world’s largest, covering 210 million people, more than three fourths of the country. The recent passage of amendment 95 in 2019 limited public expenditures in areas such as health and education. The results are being seen and felt right now.

The state of Rio, with a population of 16.46 million people, has approximately 3.6 ICU beds available per 10,000 people. The problem, however, is that 70 percent of these hospital beds are not located in public hospitals, which is where 70 percent of the patients usually go. 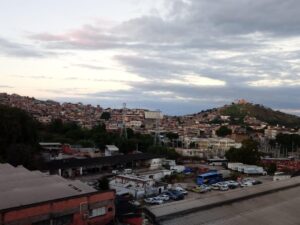 Werneck adds that the precarious conditions in the city’s favelas go strictly against the recommendations of the World Health Organization.

“What we see, on the other hand, is the mobilization of civil society in order to contain advances of the COVID-19 in more vulnerable areas throughout the country,” said Dr. Werneck.

Organized criminal groups and militias are trying to control the situation by imposing curfew in several favelas in Rio de Janeiro. According to messages delivered through social media and cars with loudspeakers, favela residents received death threats if seen on the streets after 8pm.The groups also oriented people to stay inside and only leave their houses in case of extreme emergency.

Other favelas residents are working to spread reliable information about the virus. Near Morro dos Macacos, communicators have been working hard to raise awareness. “Voz das Comunidades” started out in 2005, when 11-year-old Rene Silva decided to create a newspaper for the residents of “Morro do Adeus,” one of the favelas that form the “Complexo do Alemão” in Bonsucesso, in northern Rio. The publication became famous after Rene transmitted events of the military occupation in the Adeus slum in Rio live on Twitter in 2010.

Today, the communication platform works in nine different favelas in Rio de Janeiro to highlight social issues that residents face and to bring attention to people whose voices are not necessarily heard by mainstream media.

“Our main concern now is to do the best job we can, to alert and to give support to the ones who need it inside our communities,” Neila Marinho, a journalist and the organization’s press coordinator, told LAND.

“Voz das Comunidades” broadcasts live video streams on Instagram informing the population about daily news. As the pandemic spread, the organization started to dedicate time and space to educate people about its consequences. Their broadcasts became famous in the communities and reach thousands of viewers.

The next weeks will determine how the coronavirus impacts the favelas of Rio de Janeiro.  The densely-populated neighborhoods lack the infrastructure necessary to prevent the spread of the virus. Public hospitals are likely to be overwhelmed. But civil society organizations and groups of neighbors are busy working to close the gap.

“We just hope that people follow our instructions,” said Marinho. “And that we make it out of this crisis quickly.”

Coronavirus Will Test Brazil and Mexico