How Will the Obama Administration React to the Consulate Murders in Mexico? 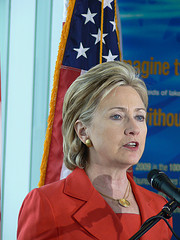 Top Story — Mexico’s drug war continued to dominate the Americas sections’ headlines on Wednesday, as journalists and analysts struggle to figure out how the murders of three people with ties to the U.S. Consulate in Ciudad Juárez will affect the U.S. posture toward Mexico.

No answer to that question has surfaced yet. President Obama has refrained from making any statements beyond his initial condemnation of the killings and support of Calderón’s attempts to rein in drug traffickers.

The State Department announced that Wednesday that Secretary of State Hillary Clinton and other cabinet-level officials will travel to Mexico to meet with Calderón administration officials to discuss the evolution of the Merida Initiative, the military assistance program through which Mexico receives anti-drug trafficking support from the U.S.

Allyson Benton, a Latin America analyst at the Eurasia Group, contextualizes Mexico’s notorious drug war violence by pointing out that homicides and kidnappings, on the whole, have decreased in recent years and are low by regional standards.