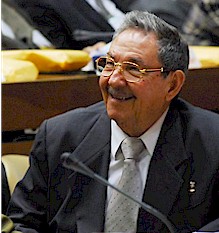 Top Story — The Inter American Press Association (IAPA) said this weekend that a number of countries in the Western Hemisphere seriously violated press freedoms, including Cuba and Venezuela.

IAPA, a Miami-based group which includes 1,380 publications, met in the island nation of Aruba to discuss what it considers to be threats to the freedom of expression in the Western Hemisphere.

“The most worrisome case continues to be the case of Cuba, where a dictatorship that has lasted nearly half a century has not allowed a minimum of freedom of expression or free press,” said Alejandro Aguirre, president of IAPA, in a telephone interview with the Los Angeles Times.

IAPA also condmmed the government of Venezuelan leader Hugo Chávez who last year revoked the licenses of 34 radio stations and in January forced cable providers to take RCTV, a anti-Chavez TV channel, off the air as it allegedly refused to play mandatory government programming.

Protection of journalists from drug traffickers in Mexico was also addressed by IAPA, which said that the country’s authorities were not doing enough to protect reporters from threats and violence.

Four journalists have been killed in Mexico this year and the IAPA claimed a fifth was recently killed in the city of Reynosa, but the local media was too afraid to file a police report.

IAPA also voiced concern over the well-being of journalism in Haiti, after the Jan. 12 earthquake that destroyed much of the capital, Port-au-Prince and killed 31 journalists.

The association said that the earthquake hindered the flow of humanitarian information and now only 12 of 50 radio stations are operating in Haiti.

About 4,000 People Evacuate Due to Volcano Activity