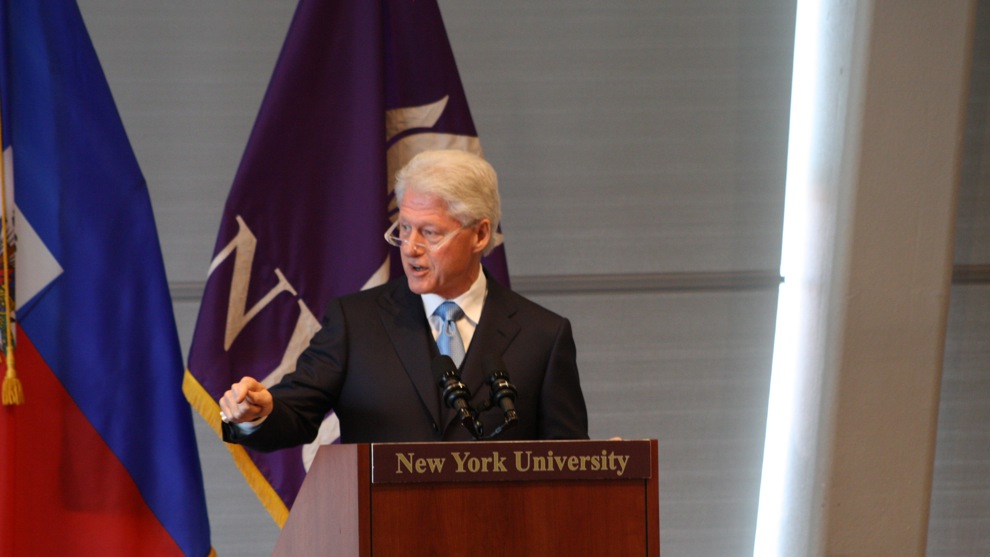 NEW YORK — Haiti’s Jan. 12 earthquake killed more 200,000 people, destroyed the national economy, and left more than a million homeless. For Haiti’s 10,000, mostly foreign nongovernmental organizations (NGOs), figuring out how best to help in such circumstances is a daunting task.

Clinton asked NGOs to help expand the Haitian government’s capacity at a private conference at New York University attended by members of civil society and Haitian President René Préval. The meeting comes just a week before the International Donors Conference at the United Nations, where a document outlining Haiti’s reconstruction plan is expected to be unveiled.

“Every time we spend a dollar in Haiti from now on we have to ask ourselves, does this have a long term return?” said Clinton, whose own NGO, the Clinton Foundation, operates in Haiti. “Are we helping them to become more self sufficient? Are we building infrastructure in local development plans? Are we creating local jobs? Are we paying salaries for teachers, doctors, nurses, police, civil servants? Are we giving money to support government agencies that provide those services?”

“In short, are we serious about working ourselves out of a job?” Clinton added.

Clinton urged civil society organizations to support the Haitian government financially, asking them “to think about whether all of us could take like 10 percent of the money we’re going to spend in Haiti and either allocate it to the government to pay salaries, or to provide specific technical support or training for new hires, so that we can get their capacity back up.”

Clinton emphasized the need for civil society organizations to be transparent. He encouraged NGOs operating in Haiti to register both with the Haitian government and with a Web portal at haitispecialenvoy.org, in order to make it easier for public officials and the press to track their activities and monitor their spending.

“Sharing our information with the government is key, especially in Haiti, because NGOs control about 65 percent of all the donor contributions,” Clinton said. “And in some places, in some sectors, there’s more NGO than government funding.”

Only 550 organizations have registered with the Haitian government so far, according to Clinton. At the time of writing, 218 organizations had updated their profiles at haitispecialenvoy.org since Jan. 12, when the earthquake struck.

Clinton also drew the audience’s attention to what he considered a critical disaster-relief problem that has yet to be sufficiently addressed — moving displaced Haitians out of encampments that run the risk of flooding during the upcoming rainy season. “Every day we leave people in a low camp at risk of flooding that we don’t have to, is a day we put their lives at risk,” Clinton said.

Clinton’s call to aid the ailing Haitian state reflected the concerns of academics and aid workers who have proposed the creation of a “Marshall Plan” for Haiti.

Clinton’s speech also provided a further indication that he is rethinking how international development assistance should be deployed. Once an advocate of development through free-market principles, Clinton told the Senate Foreign Relations Committee this month that he should not have encouraged Haiti to cut tariffs on food imports when he was president because it allowed cheap U.S. rice to undermine local producers. “It may have been good for some of my farmers in Arkansas, but it has not worked. It was a mistake,” Clinton said, according to The Associated Press.

Haitian President René Préval, himself an agronomist, has repeatedly stated his opposition to long term food aid, calling on international donors to invest in Haitian agricultural production instead.

“God only knows how many people would be alive today if not for the efforts of NGOs over decades, but we’re being asked to do something we’ve never really been asked to do before,” Clinton said, referring to the call to help the Haitian government take on the roles currently filled by NGOs. “I wouldn’t worry about it if I were you, because if we do it, there will be some place else that will need us.”

Building Cooperation and Accountability into the DNA of a Nation | RightRespect says:
April 9, 2010 at 11:55 am

[…] Bois Caïman which launched the war of independence against the French slave owners. More recently, U.N. Special Envoy to Haiti and former President Bill Clinton commended the role of NGOs at a private conference, stating “God only knows how many people would […]