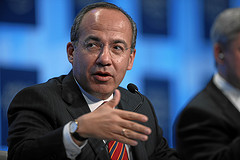 Top Story — The death toll from Mexico’s war on drug cartels may be much higher than reported by the Mexican media, according to a new, confidential Mexican government report leaked to the press this week. Estimates by Mexican media had suggested the death toll was around 18,000, but the new report says that it is above 22,700.

Mexican President Felipe Calderón began an offensive on the drug cartels operating in the country shortly after taking office in late 2006 and much attention has been focused on the rising tide of violence in the country, especially in towns close to the U.S. border.

The Associated Press said it obtained a copy of a Mexican Interior Ministry report that had the death toll at 22,700. For reasons that were not clear, the AP’s numbers differed slightly from those reported by Mexican daily Reforma. The Interior Ministry said it planned to release the report Tuesday, but has yet to make it public.

Much of the violence in Mexico has been attributed to fighting between rival cartels over turf and lucrative trade routes to the U.S. To combat the violence Calderón has sent 48,000 soldiers and several thousand federal police officers to the U.S. border region and other areas plagued by cartel violence.

While some success has been achieved in capturing or killing high-level drug figures, namely alleged kingpin Arturo Beltrán Leyva, who died in a raid in Cuernavaca last December, critics of the war say it has failed to reduce violence along the border.

Other top news: The Colombian prosecutor’s office released documents from the country’s Department of Administrative Security (DAS, in Spanish; the Colombian equivalent of the FBI) to independent journalist Hollman Morris indicating that the government had waged a “political warfare” against him. The DAS’ tactics included the initiation of an “international smear campaign,” the documents show.

An investigation published by the Colombian weekly magazine Semana in February of last year revealed that the DAS had coordinated a series of illegal wiretaps of opposition politicians, human rights defenders, supreme court justices and journalists.

The documents have been posted to the Center of International Policy’s “Plan Colombia and Beyond” blog.