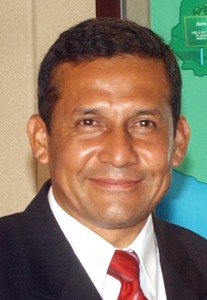 Some 21.1 percent of those polled said they intended to vote for Humala, up from 15.7 percent the previous week. Keiko Fujimori –daughter of the former president Alberto, who is now serving a 25-year sentence for human rights violations —  trails Humala with 19.9 percent.

No candidate enjoys enough support to avoid a runoff and roughly a quarter of respondents do not know who they will vote for. High levels of volatility marked Peru’s last three presidential elections.

“If Mr. Humala won, I would be willing to support him with issues such as job creation, the democratic distribution of electricity and water, and improvement in education,” current President Alán García said, according to Peruvian daily El Comercio.

García, a center-right politician whose pro-market policies conflict with Humala’s support of an increased economic role for the state, also said that “at least four of the five candidates would continue my work,” without naming anyone. “That’s better than in many other places, where the president has a lot of popularity, but the one who succeeds him does the exact opposite.”

A survey released this month by Consulta Mitofsky of Mexico found that Alán García had the lowest approval rating of 20 presidents studied in the western hemisphere, with 27 percent.

Cholera Outbreak In Haiti Leaves 9,000 Hospitalized And Over 500 Dead