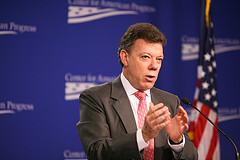 The arrest warrant stems from Santos’ involvement in a 2008 bombing raid against Colombia’s FARC rebels on the Ecuadorean side of the border. At the time Santos was Colombia’s defense minister and he allegedly oversaw the raid.

“We have made every effort to advance the reestablishment of relations with Ecuador and we will continue doing so, but this decision by the Ecuadorean courts affects that process,” Uribe said, according to the Washington Post.