Bolivia, This Week in Latin America 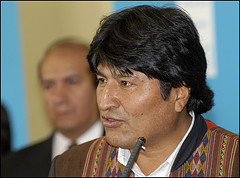 Top Story — The government of Bolivian President Evo Morales nationalized three power companies, a local electricity cooperative and a smelter plant this weekend. The nationalization of three of the power companies was announced during a May Day celebration.

Soldiers and police occupied the power companies early Saturday morning. Two of the companies were partially controlled by foreign investors in France and the United Kingdom.

“Once again, a first of May and as always we’re recovering our privatized companies,” Morales said, according to EFE.

The nationalized smelter plant was owned by the Swiss company Glencore, which Morales accused of under-investing. This marks the second time the Bolivian government has nationalized a Glencore facility; in 2007, the government took over Glencore’s Empresa Metalúrgica Vinto.

“In recent years, there has been a lack of productivity at the plant. It has practically been in the process of being dismantled,” said Bolivian Presidency Minister Oscar Coca, according to Reuters.

The nationalization of these facilities is seen as another move by Morales to tighten state control over the economy. Morales, who is facing criticism from public sector workers asking for pay raises, did not take part in May Day celebrations.

It was the first time since he took office in 2006 that Morales did not attend and the May Day marches, where he has announced other takeover plans in previous years.

There is so much to admire and respect in President Morales. However, these theatrical takeovers of private enterprise feel like the same thug mentality that he has fought against all his life. What foreign interest will risk investing anything at all in Bolivia?