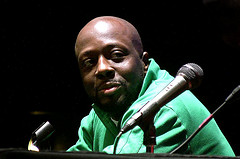 Top Story — It is now certain that pop star Wyclef Jean will run for the Haitian presidency, confirming rumors that have been circulating for weeks.

“My decision was a draft. I’m being drafted by the youth,” Jean told Time Magazine in a video posted to its Web site.

Ex-Prime Minister Jacques-Edouard Alexis has also announced he will run. With the support of current President René Préval’s newly formed Unity party, Alexis is expected to be one of the strongest candidates.

Jean also faces competition from his own uncle, Raymond Joseph, the former ambassador to the United States.

The winner of the election, scheduled for Nov. 28, will face some of the most urgent problems of any leader in the hemisphere. The Jan. 12 earthquake leveled Haiti’s capital, killing an estimated 230,000 people and leaving as many as 1.6 million homeless.

The new president will also face the intimidating task of building a strong Haitian state. The devastation caused by the natural disaster was facilitated by Haiti’s poor infrastructure and shoddy construction. At the heart of the problem, many experts say, was a weak Haitian government hobbled by a combination of foreign intervention, corruption and poverty.

Jean’s formal entry into Haitian politics also promises to highlight a growing tension between those who were living on the island when the devastating earthquake struck on Jan. 12 and those who immigrated and have returned to help rebuild the country. Jean was born in Haiti, but raised in Brooklyn, New York.

Jean will formally announce his candidacy tonight in an English-language interview, according to The Miami Herald.

Below is a video of Wycleff Jean Speaking with Time Magazine.

I work for an AIDS advocacy organization that supports a grassroots coalition of AIDS advocates in Haiti. One issue of importance for a potential candidate: Staving off new infections.

More info here:
Out of the Spotlight, the Quiet Spread of HIV in Haiti