Tails end of a coin from the Falkland Islands 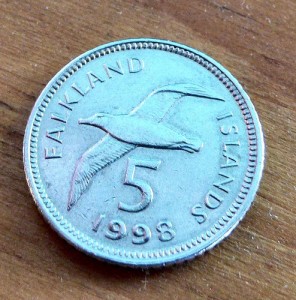 Tails end of a coin from the Falkland Islands

Top Story — The Argentine and British governments have become embroiled in a diplomatic dispute over access to the Falkland Islands that may play a significant role at the meeting of the Rio Group in Cancún, which begins on Sunday.

The Fernández de Kirchner administration will press its claim and try to shore up support at the meeting of the Rio Group this Sunday in Cancún, as well as at the United Nations.

Britain conquered the Falkland Islands in 1833 and has controlled them since. The Argentine government attempted to dislodge the British militarily in 1982, but failed.

Military defeat notwithstanding, Argentina’s claim to the islands remains popular and Argentines commonly view the British control of the Falklands as an affort to their sovereignty and a legacy of nineteenth-century British imperialism. Argentines refer to the islands as the “Islas Malvinas.”

The British government is maintaining but not increasing patrols around the Falkland Islands. British Prime Minister Gordon Brown said the Royal Navy would protect the country’s commercial vessels.

[…] The United Kingdom rejected an offer by the U.S. to mediate its conflict with Argentina over the Falkland Islands. […]