Violent Weekend In Mexico As Drug Violence Spreads Throughout The Country 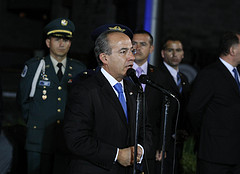 Top Story — Mexico suffered a string of violent episodes over the weekend, as drug cartels continued to destabilize the country.

In the most recent wave of violence, at least 20 people were murdered in the border city of Ciudad Juaréz, according to The Associated Press.

The victims were killed in separate incidents. Ciudad Juárez has been the scene of a violent turf war between the Juárez and Sinoloa cartels.

Police also found a human head in a gift-wrapped box over the weekend in the southern city of Oaxaca. Local reporters said a message at the scene made reference to the Zetas cartel.

On Friday, the Mexican government announced that the brother of a former state attorney general of Chihuahua had been killed, The Los Angeles Times reported. The victim, Mario González, had been kidnapped and was forced to make a video accusing his sister Patricia of committing crimes for drug cartels, Mexican officials said Friday.

Patricia González denied any connections to the cartels in an interview with The Los Angeles Times last month. “It hurts my soul that criminals use my brother to punish me,” she said.

Also on Friday, a leader of the Gulf cartel, Ezequiel Cárdenas Guillén, was shot to death in the border town of Matamoros after a shootout that residents said lasted several hours.

U.S. President Barack Obama voiced support for the Mexican government in its battle against the cartels upon learning of the violence on Friday.

“The president offered his condolences to President Calderón on the death of Mexican officials involved in the operation,” the White House said, according to a report by The BBC.

Cholera Outbreak In Haiti Leaves 9,000 Hospitalized And Over 500 Dead