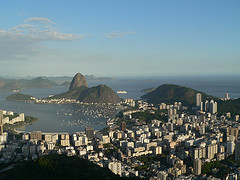 Rio de Janeiro, where floods north of the city killed over 300 people.

Like Haiti’s earthquake exactly one year prior, the high death toll in Brazil’s natural disaster highlighted the precarious living conditions of the country’s poor and the government’s loose enforcement of building codes.

“We saw regions where mountains fell apart,” Brazilian President Dilma Rousseff said, after surveying the region by helicopter on Thursday. In Brazil, she added, “housing in high-risk areas is the rule, not the exception.”

Rousseff authorized $418 million to fund relief and rescue efforts. The Brazilian Health Ministry says it will send seven tons of medications to treat those affected by the disaster, according to The Christian Science Monitor.

“This was like a tsunami,” Vanda Cortasio, 46, told The New York Times. “People live in shacks on mountains, so many more will die it if continues to rain like this.”

One million Venezuelans fled to Colombia in past year: Red Cross

Asylum Seekers Will Be Sent Back To Wait In Mexico

Colombian Hitmen Arrested in Spain; Suspected To Be Part of La Negra Group