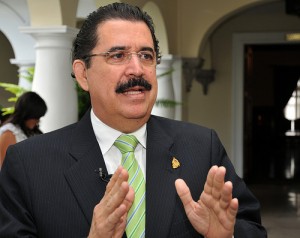 Top Story — Overthrown Honduran President Manuel Zelaya signed an agreement on Sunday with current President Porfirio Lobo in the Colombian city of Cartagena that will allow Zelaya to return to the country.

“Zelaya will be given the security and treatment of a former president because he deserves our respect and consideration,” Lobo told the press on Saturday.

The deal also requires respect for human rights, mandates investigations into allegations of human rights abuse, and specifies that  Zelaya’s supporters be allowed to participate in political life and in the elections of 2014.

The agreement will facilitate Honduras’ return to the Organization of American States, since some countries continue to oppose Honduras’ reentry until Zelaya returns. OAS General Secretary José Miguel Insulza said in a press release he had received the agreement and would submit it today to the Permanent Council. The Permanent Council, in turn, will set a date today for a General Assembly meeting to discuss Honduras’ reentry to the regional body.

The deal paving the way for Zelaya’s return to Honduras marked a diplomatic victory for Colombian President Juan Manuel Santos, who brokered the deal during a meeting with Lobo and Venezuelan President Hugo Chávez last month and attended Sunday’s signing ceremony in Cartagena.

Zelaya says he will return to Honduras on May 28.

The Honduran military overthrew Zelaya and sent him into exile in June 2009.