QUITO, Ecuador — Pamela Troya was preparing for an interview with a human rights defense organization in Quito in June when a fellow LGBT activist burst into the studio screaming.

“Pamela, you did it!” the activist said.

In response, Troya grabbed her phone, logged onto Twitter and saw the news she’d been waiting for the past six years. The Constitutional Court of Ecuador had just approved the Equal Civil Marriage Act. Tears began to flow down her cheeks as she dialed her girlfriend, Gabriela Correa. With Correa on the other end of the line, Troya had no words. She felt out of breath from crying.

It would be hours before Troya found the words she wanted to say. In the Plaza Foch in Quito, surrounded by LGBT rights activists and supporters and a giant rainbow flag waving on the street, Troya hugged Correa and said, “This fight was not in vain. We made it, my love. We will finally get married.”

Troya and Correa spent six years fighting Ecuador’s justice system for the right to marry. Their legal struggle started on Aug. 5, 2013, when they became the first gay couple in Ecuador to request marriage from the Civil Registry. Their request was flatly denied by then-judge Gloria Pillajo, who cited religious arguments and the Constitution of 2008. Pillajo ruled that civil marriage was only permitted between men and women, and she described their petition as illegitimate and unconstitutional. But Troya and Correa didn’t give up.

After Pillajo refused their marriage request, they founded the collective “Matrimonio Igualitario EC.” Then, in 2014, with dozens of activists backing them up, they filed a lawsuit in the Constitutional Court against the Ecuadorian state for the denial of a right, demanding them to reinterpret articles 11 and 67 of the Constitution, which recognize equal rights for all people without distinction of sex, race or religion, as well as the family in its variety of types. Thanks to their dedication to the pursuit of justice, exactly six years after their fight began, they got married. Their marriage marked a milestone in the LGBT rights movement in Ecuador, and their struggle opened the door for other couples to marry. During Troya’s and Correa’s six-year fight, eight other gay couples requested marriage. 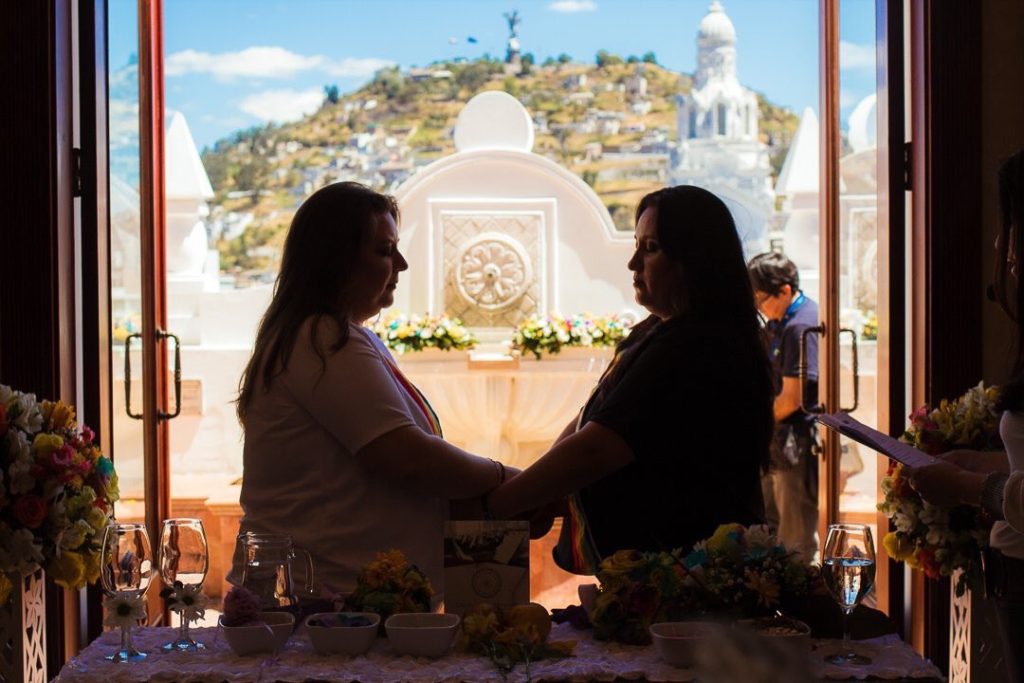 Pamela Troya and Gabriela Correa got married in August 2019 at the same Civil Registry where they began their fight for equal rights to marriage six years ago. (Photo by Luisa Carvajal)

Finally on June 12, 2019, the Constitutional Court approved the Equal Civil Marriage Act in Ecuador, allowing them to marry. Bernarda Ordóñez, a human rights lawyer and advisor to the National Constituent Assembly of Ecuador, said the decision of the judges is in accordance with the principles of equality established in the Constitution. “The judges who voted in favor did a great job in determining the most suitable way to act according to the spirit of the Constitution,” Ordóñez said. “When a right is a right for one, but not for another, it is not a right, but a privilege.”

The win in the Constitutional Court marks a major victory for the LGBT rights movement in Ecuador. Until 1997, Ecuador considered same-sex relationships a crime, with a penalty of 4 to 8 years in prison. After its decriminalization, Ecuador became the first country in the Americas, and the third in the world, to include sexual orientation as one of the categories protected against discrimination. Ten years later, in the Constitution of 2008, the de facto union between same-sex couples was legalized. This meant gay couples could legally live together as a couple and receive some of the same benefits as married couples, such as receiving their deceased partner’s social security pension, but they couldn’t actually marry. Finally, in 2019, Ecuador became the 27th country in the world to legalize same-sex marriage, joining Argentina, Costa Rica, Brazil, Colombia and Uruguay in Latin America.

“Our goal was to call each other wives,” Correa said. “Beyond a personal whim, there is a symbolic value. An LGBT person may or may not consider marriage, but at least he or she must have the right to choose, just like a heterosexual couple.”

Before submitting their application to the Civil Registry in 2013, the couple had planned to marry in Argentina, where gay marriage had been legalized since 2010. However, after Correa was fired from her former job because of her sexual orientation, they decided to assume activist responsibility. “It has been exhausting to have to fight to prove that we are human beings, but someone had to do it,” Correa said.

Although the ruling of the Constitutional Court was applauded by international organizations, including the United Nations, it was met with some resistance at home. Mass mobilizations of conservative and fundamentalist groups claiming to “defend the traditional family” and threatening “do not mess with my children” have been demanding a repeal of the ruling. Days after the decision, conservative activist Fernando Balda presented a referendum request calling on Ecuadorians to decide whether or not to accept gay marriage in the country. Troya, who is an active Twitter user, said she has had to block 1,200 accounts from people who were sending her messages of hate, calling her abnormal and unnatural and even mocking her weight.

“This fight has not been easy,” Troya said. “We have been the target of homophobia and aggression, especially online. The biggest challenge has been to endure all of the harassment on social media that sometimes shows what society is really like.”

Ordóñez said Ecuadorian society is still very polarized between advancing rights and respecting traditional values, but despite the counterarguments like Balda’s, the ruling is clear. “The decision of the judges is irrefutable, and progress is only made when it most respects diversity,” Ordóñez said.

In recent years, younger generations have shown greater acceptance of diversity and its visibility in the public sphere. Pride marches, for example, have been taking place in Quito and Guayaquil since 2013. This year, for the first time, marches were held in smaller cities, too. 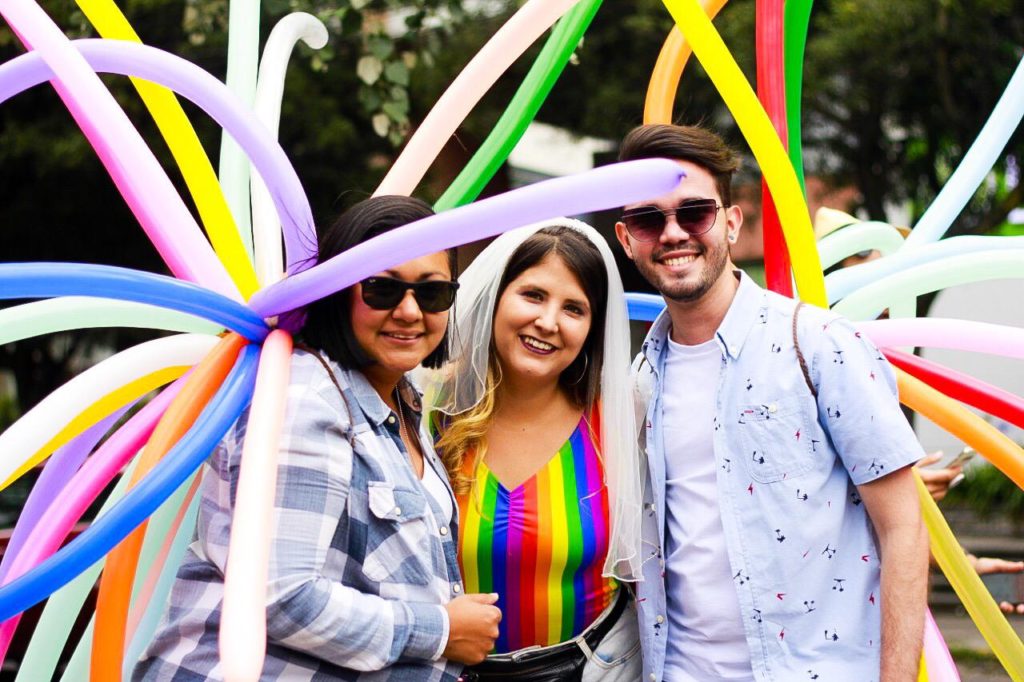 Days after a historic legal decision in favor of same-sex marriage, people turned up to celebrate Pride in Quito. Gay Pride Parades have been taking place since 2013. (Photo by Gabriela Barzallo)

Others have channeled their activism through the media. Pedro Gutiérrez, a 24-year-old gay man from Cuenca, a city known for its marked Judeo-Christian tradition, participates in “radio activism,” as he describes it. In 2016, he founded “Sin etiquetas” (Without Tags), a weekly radio program also broadcast on Facebook Live that addresses issues in vulnerable communities, including the LGBT community. Gutiérrez uses his own media to combat so-called “fake news” from anti-LGBT rights groups. These groups have created disinformation campaigns on social media and WhatsApp, spreading hateful messages, such as that same-sex couples want to adopt children for perverse ends.

“It is necessary that the responsible media create digital platforms to check fake news and that the pro movements can continue to educate” Gutiérrez said.

Gutiérrez was selected as one of the 29 global leaders for equality to participate in the 2019 Human Rights Campaign Global Summit in Washington in April, where he took part in intense discussions on trends and innovative ways to advance LGBT equality around the world. He now plans to organize workshops with more activists in Ecuador to find ways to educate people through media storytelling. Similarly, other groups like Guayaqueercity, Proyecto Zoom, VulgA and Maricas Unidas, have used digital platforms as a vehicle for their activism. 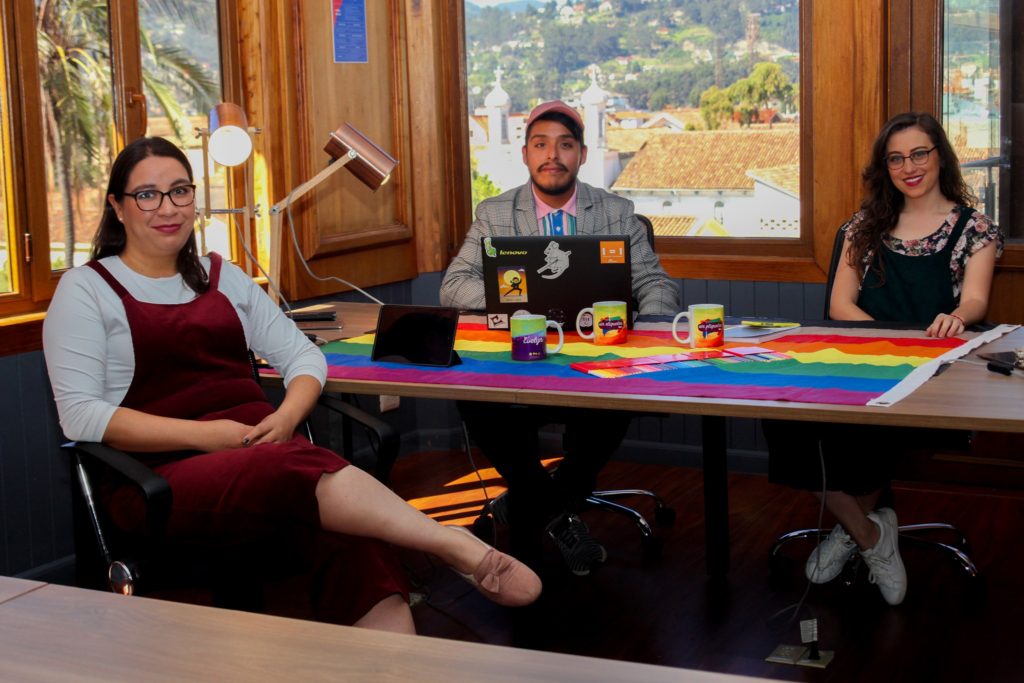 According to the National Institute of Statistics and Censuses (INEC), 9 out of 10 Ecuadorians claim to belong to a religious affiliation, primarily Catholic. Both Gutiérrez and Ordóñez agree that now the biggest challenge is cultural change. The rewritten law allows them to address other challenges now. “If you do not have a decent life with the minimum rights, you will not be thinking about adopting, or getting married,” Gutiérrez said.

Despite the struggles that the LGBT community still faces, activists had something to celebrate when Troya and Correa finally tied the knot in August. At 4 p.m. that day, about 60 people gathered to share the happiness of Troya and Correa, who had just been declared “legally married.” Troya arrived with her sister and 12-year-old nephew, who said that his dream of finally seeing his two aunts marry had come true. Once the ceremony was over, outside the Civil Registry with their new IDs, Troya shouted, “My love with Gabby is proof that real love can endure anything. We fought against presidents, constitutions, but more than anything, we know that we have positively impacted not only one person but a whole country.” 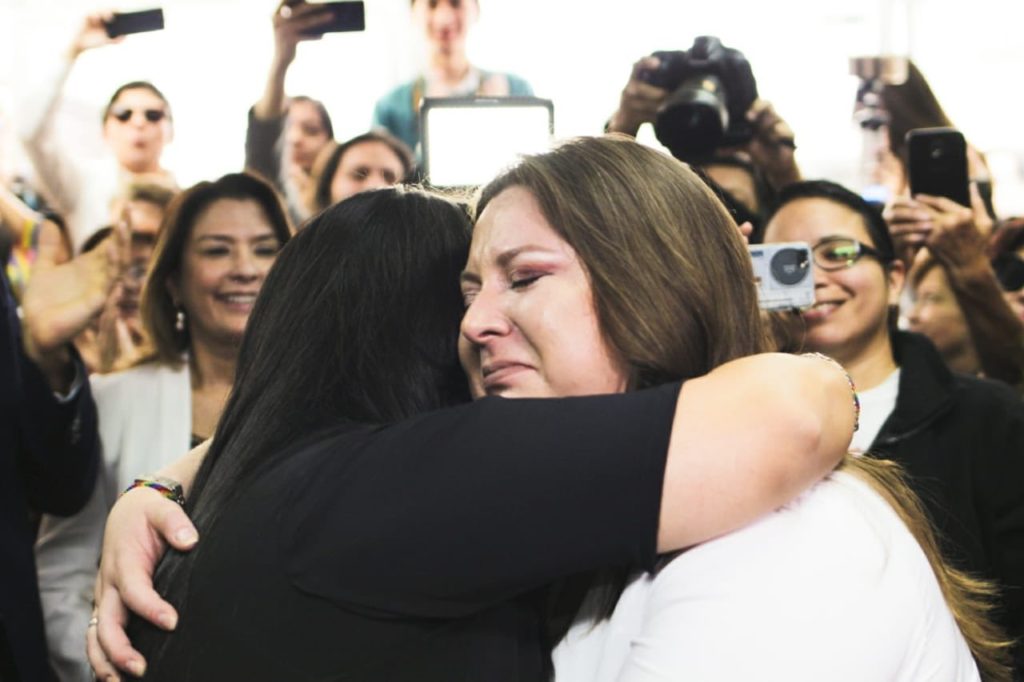