The North Barragem Dam in the Xokleng Indigenous territory, which is in legal dispute. Photo by Clara Comandolli.

INDIGENOUS TERRITORY LAKLÃNÕ AND SÃO PAULO– A court judgment that will shape the future of Indigenous land demarcations across Brazil has become a battleground between defenders of native communities and agribusiness.

The right of Xokleng Indigenous people to their historic territory in the state of Santa Catarina will be decided in Brazil’s highest court. The ruling will be a General Repercussion case, meaning the decision will be implemented as a procedure in other cases of Indigenous land rights.

The judgment, originally scheduled for April, is now indefinitely delayed due to the coronavirus pandemic. The future of Indigenous land demarcations hangs in the balance.

President Jair Bolsonaro has spoken against Indigenous land demarcations, declaring before being elected, “There will not be a centimeter more of Indigenous land under my government.”

“Demarcation is essential for Indigenous existence,” says Ana Uglô Patté, 27, a Xokleng leader and Parliamentary Advisor to the Socialism and Freedom Party (PSOL) in São Paulo. “Without land we are nothing. Without land we have no culture, health, education, or security.”

In the Brazilian Constitution, Indigenous groups have “original rights over the lands that they have traditionally occupied.” The government is required to demarcate and protect those areas. But starting with the demarcation of the Raposa Serra do Sol Indigenous territory in 2007, a new legal interpretation, known as “Marco Temporal,” was used. It defines a time frame of occupation for Indigenous land to be demarcated. Only the people who were in the traditional territory in 1988, when the national Constitution was adopted, would have a right to land demarcations.

The agribusiness lobby backed the new legal interpretation. In 2017, it was incorporated by the government among the indigenous norms. It is now being applied to the Xokleng land.

This interpretation stops and reverses the demarcation processes, as already happened to 27 indigenous lands in 2020. The Xokleng court case will be the final word: if the Marco Temporal theory will be nullified or remain valid.

“If an Indigenous people were not in their territory in 1988, this is part of a history of displacement and intimidation,” says Carol Marçal, of Greenpeace Brazil, who is also a friend of the court in the land demarcation case. “The jury will vote over part of the territory that has been plundered from the Xokleng over the past century in a colonization process that is stained with Indigenous blood.”

According to Indigenist Missionary Council (CIMI), there are more than 250 Indigenous territories in Brazil awaiting legal formalization. Of those, 63 only need the final signature of the Brazilian president, which definitively declares the territory as Indigenous.

On May 18, over twenty Indigenous, socio-environmental and “ruralist” organizations, made up of large landholders and their representatives, joined the legal dispute as friends of the court. They will contribute context on the case to inform the jury’s decision.

Among these organizations is the Articulation of Indigenous Peoples of Brazil (APIB), which brings together representatives of the Indigenous national movement, and is coordinated by Sônia Guajajara, who in 2018 became the first Indigenous person to run for president. Ana Patté is a member of the APIB.

“I grew up with my grandfather saying that the non-indigenous are exterminating us also with the pen, so we have to occupy political spaces to survive,” says Ana Patté. She is now an advocate for the Xokleng’s land to be recognized. The Xokleng demand the demarcation of over 90,000 acres (37,000 hectares) of the Indigenous Territory Laklãnõ, which they were promised over a century ago. 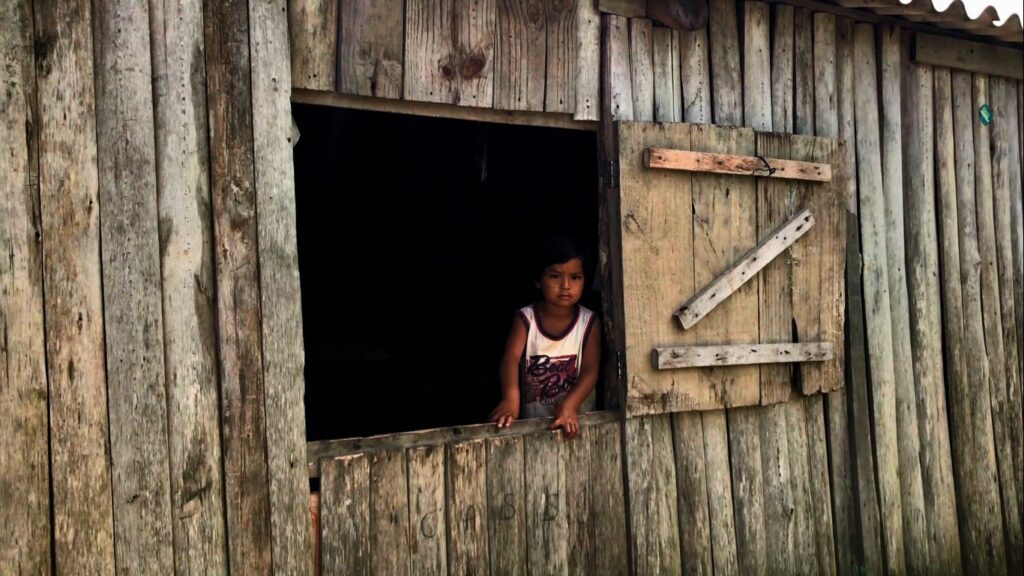 A child in the Barragem community, Santa Catarina. Photo by Andressa Santa Cruz.

The Bolsonaro administration has openly supported agribusiness interests and mocked the struggles of Indigenous people in Brazil. It comes as no surprise that attacks and invasions of Indigenous land have increased under Bolsonaro.

Bolsonaro has also spoken in favor of arming the population, heightening the danger of violent incursions into Indigenous territories. Gun legislation has been weakened and the number munitions allowed per person extended.

During the pandemic, the national environment minister has called for deregulation of environmental policy while the population is “distracted” with the coronavirus. In the same occasion, at an April 22nd cabinet meeting, another minister expressed his disdain for Indigenous people.

“In the political context we are experiencing, agribusiness sees an opportunity to incorporate land into the commodities market,” said Carol Marçal, researcher from Greenpeace Brazil. “This development model is pursued at all costs and is environmentally predatory and socially exclusive.” 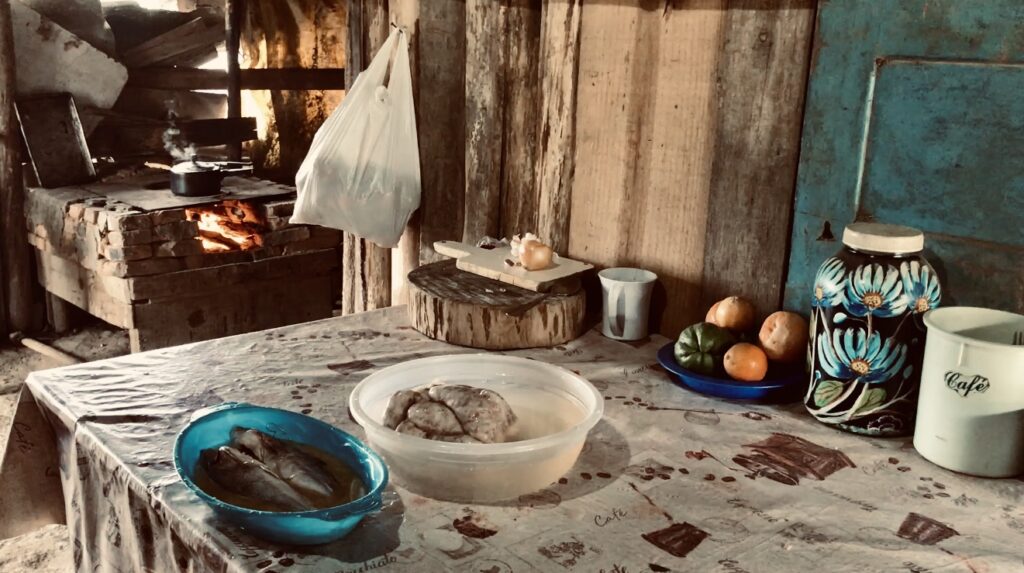 A typical meal in a Xokleng family. Photo by Andressa Santa Cruz.

Farmers, loggers, and the state of Santa Catarina all claim to own part of the 37,000 hectares of the Laklãnõ Indigenous Territory that is in dispute. The Xokleng people had their rights suspended in the final step of land demarcation.

In 2019, the Xokleng land demarcation was determined as a General Repercussion case, and the agribusiness lobby was motivated to join the legal battle. Lobbying groups, including the Brazilian Agriculture and Livestock Confederation (CNA) and the Brazilian Association of Soybean Producers, recognize that the court decision will impact their interests in Indigenous reserves, including in the Amazon forest.

In a petition to the Supreme Court, CNA said that a decision in favor of Indigenous land demarcation will be a “deliberate act of disservice of their juridical authority,” and would increase violent conflicts.

“If we want to win the great battle nowadays, to contain climate change, the fight to guarantee the rights of Indigenous peoples is a primary and basic task,” says Marçal, from Greenpeace. “As an environmental organization, we cannot fail to recognize the crucial role that Indigenous peoples play in the conservation of nature.”

The United Nations recognized the crucial role of Indigenous peoples in the conservation of the environment. While they make up 5% of global population, their territories hold 80% of the planet’s biodiversity. Referencing the Xokleng land demarcation, Marçal also warns, “In addition to being a matter of justice, what is at stake is the future for all of us.” 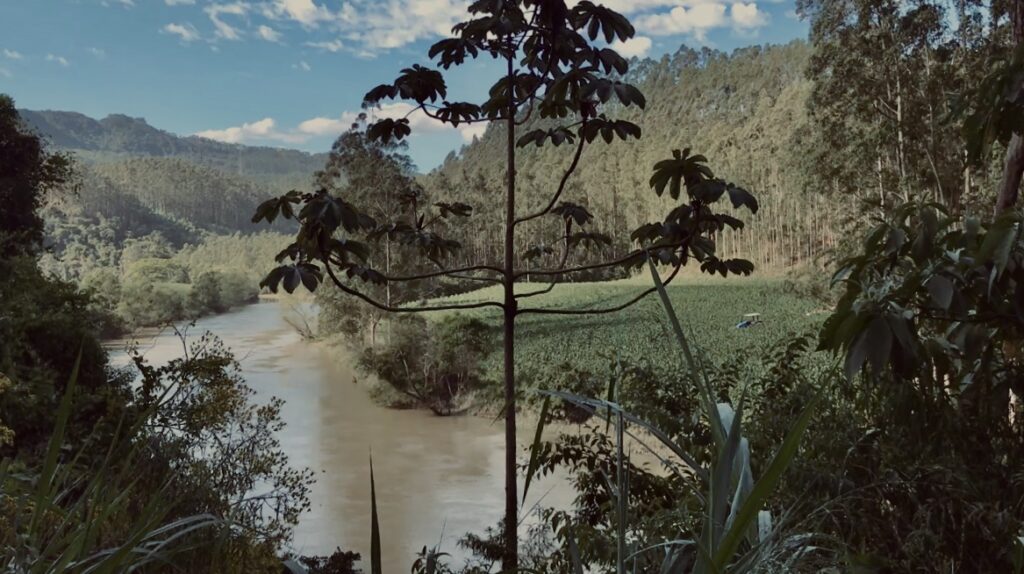 An Araucaria tree in the Xokleng territory, with a tobacco plantation in the background. Photo by Clara Comandolli.

The influence of the Xokleng people on the land is palpable. Archaeologists have found that centuries ago the Jê society, the ancestors of the Xokleng, planted the Araucaria forests of southern Brazil. The trees are one of the few species that fruit in cold seasons and climates. The Araucaria trees produce Pinhão, a nutritious nut that is a typical food in Xokleng cuisine and has been incorporated by people across southern Brazilian into their diets.

The Xokleng territory used to spread across southern Brazil before the arrival of Europeans in the 18th and 19th centuries but was almost wiped out during colonization. Darcy Ribeiro wrote in the 1970 book Indians and Civilization about the professional bugreiros who were sent to kill the Xokleng and clear land for Italian and German immigrants. The bugreiros were mercenaries hired by imperial governments to attack Indigenous communities.

In 1914, after witnessing the massacres of their people, the surviving Xokleng community contacted officials from Indian Protection Service, the first Brazilian Indigenous office, to try and end the killing.

The SPI promised them 37,000 hectares, which the Xokleng people are defending today in the Supreme Court trial. Today, they have the legal right to only occupy 13,000 hectares. Part of their territory was flooded by the ‘Barragem Norte,’ North Barrage, the largest containment dam in Brazil. 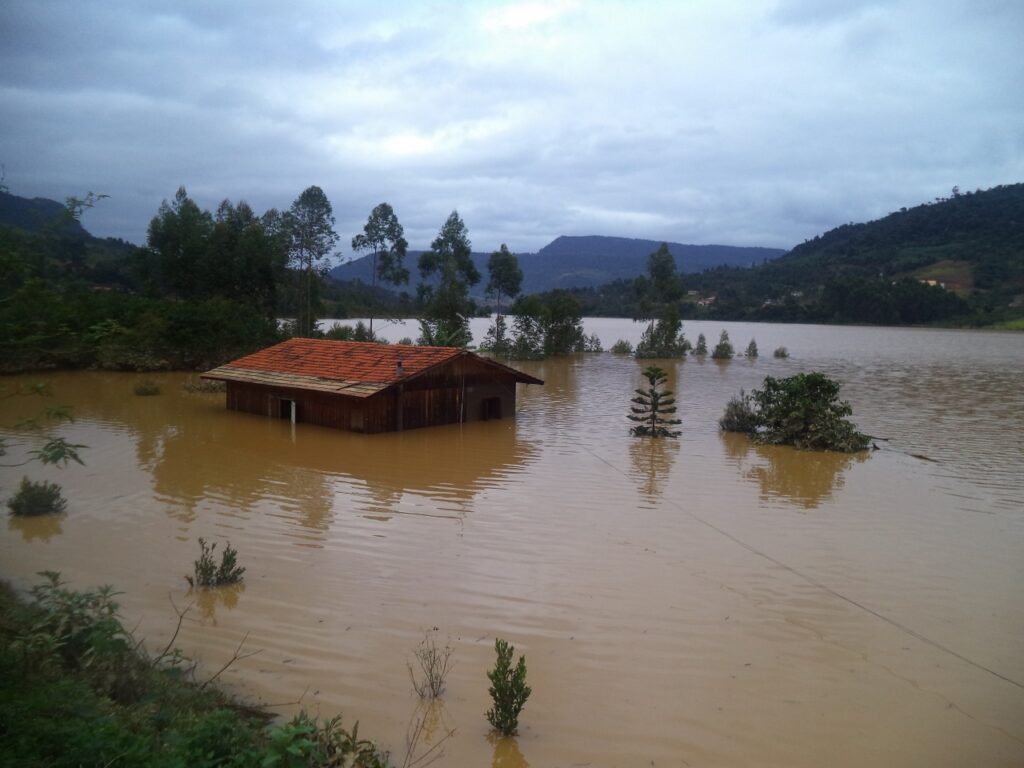 A flood in the Xokleng territory in 2014. Photo courtesy of CIMI.

The dam was built in the 1970s to prevent flooding in nearby cities, but it inundated the most productive area of the Xokleng’s territory and destroyed hundreds of hectares of plantations. Heavy rains now cause floods that drown people, houses, and roads, as happened to Willi Ndilli’s home in 2014.

“The government says we have to leave. But where will we go? This they don’t say,” says Ndilli, 78, who now lives with his relatives in an improvised wooden shack next to the Barragem Norte.

His family continues to advocate for the compensation they were promised. “It may not be for my life. It may be to these new ones, the ones that are coming.” 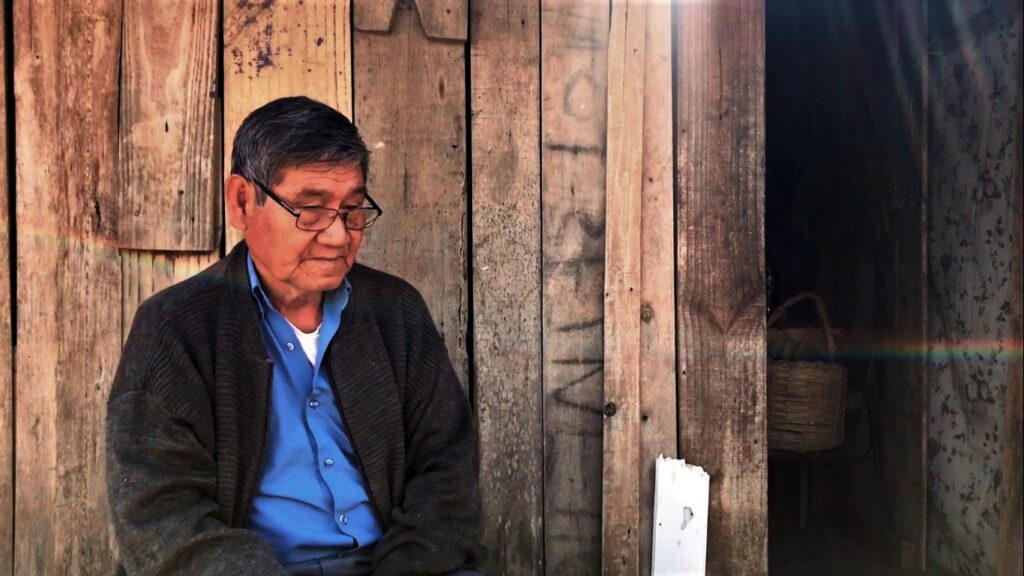 Willi Ndilli, who will not has been compensated after his house was washed away in a flood. Photo by Clara Comandolli.

Ndilli is the grandnephew of Maria Korikrã. She was adopted by a German family in 1905, and her testimony was crucial for the creation of the Indian Protection Service (SPI). As a young girl, she told her adoptive parents:

“You cannot assume that I have come with pleasure to you. No! You are all so kind to me. But I could never forget what happened to me, and during the night my mother always comes, with her neck cut off, and shows me my little brother, who was cut into pieces. My brother, Junvégma, also comes to sing for me. In the morning, however, when I wake up, they are no longer here, and I have no one else, only you.”

Korikrã’s memories were included in the report presented in the Congress of Americanists in Vienna. In 1910, after two years of international pressure against the ongoing Indigenous massacre in Brazil, the SPI was founded. It later became the National Indian Foundation (FUNAI).

“To tell our history is our weapon. People have to know we exist and our problems,” says Ndilli, remembering his great-aunt’s story.

In the past five years, two shocking murders of Indigenous people took place in the state of Santa Catarina. First, two-year-old baby Vitor Kaingang was beheaded while breastfeeding in his mother’s lap, in January 2016. Then Xokleng professor, Marcondes Namblá, was beaten to death in January 2018.

Namblá was killed when selling ice cream during the summer vacation. Besides teaching, he was the judge of the Laklãnõ Territory. He was a crucial figure in the community, who contributed to understanding land rights and demanding demarcation. Namblá used to monitor the logging and tobacco companies in the region. 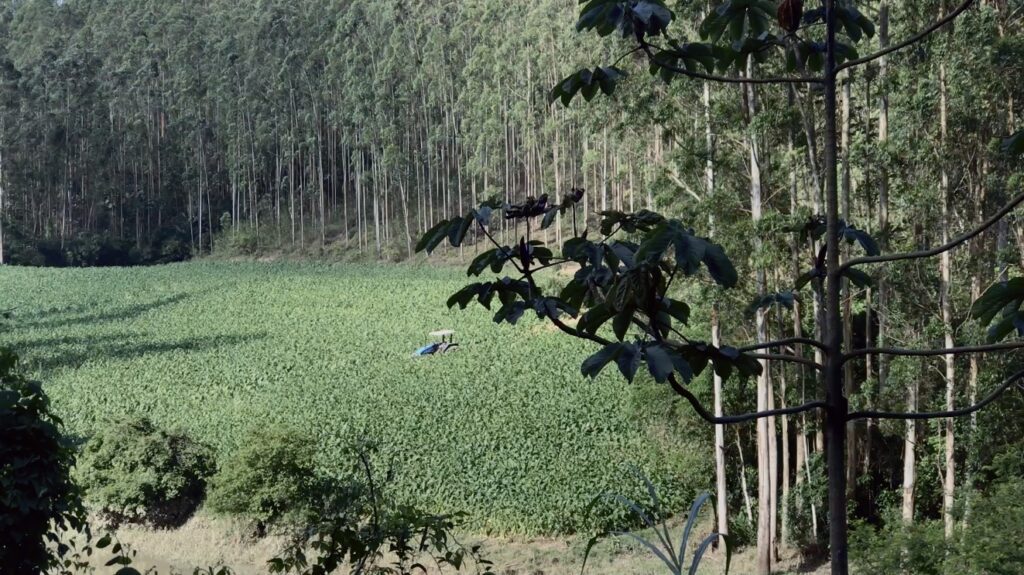 A tobacco plantation in the Xokleng territory. Photo by Clara Comandolli.

While the politically and economically powerful agribusiness industry have dedicated resources to the case, Xokleng people are now struggling to meet their basic needs during the coronavirus pandemic. Many people lack basic prevention items such as masks or hand sanitizer.

Ana Patté says her mother has been sewing face masks for those in need. The community is also taking turns day and night in the sanitary barriers set up on the edges of the Indigenous hamlets, which have blocked circulation since March.

There are no coronavirus cases in the Xokleng population, but the first case was confirmed in a nearby city in late May. The Xokleng re-enforced social isolation measures in their territory and only urgent services are authorized to enter, health care vehicles and the employees responsible for water supply. “We are having a serious problem of lack of water. It hasn’t rained for months. It is a change in the climate,” explains Patté.

While the Xokleng wait for the day the court case will be decided, they survive the present crisis, together.

In the absence of state help, Patté says, “We count on the collaboration of the community.”

To learn more about the Xokleng people, watch the short-documentary “Laklãnõ/Xokleng.” 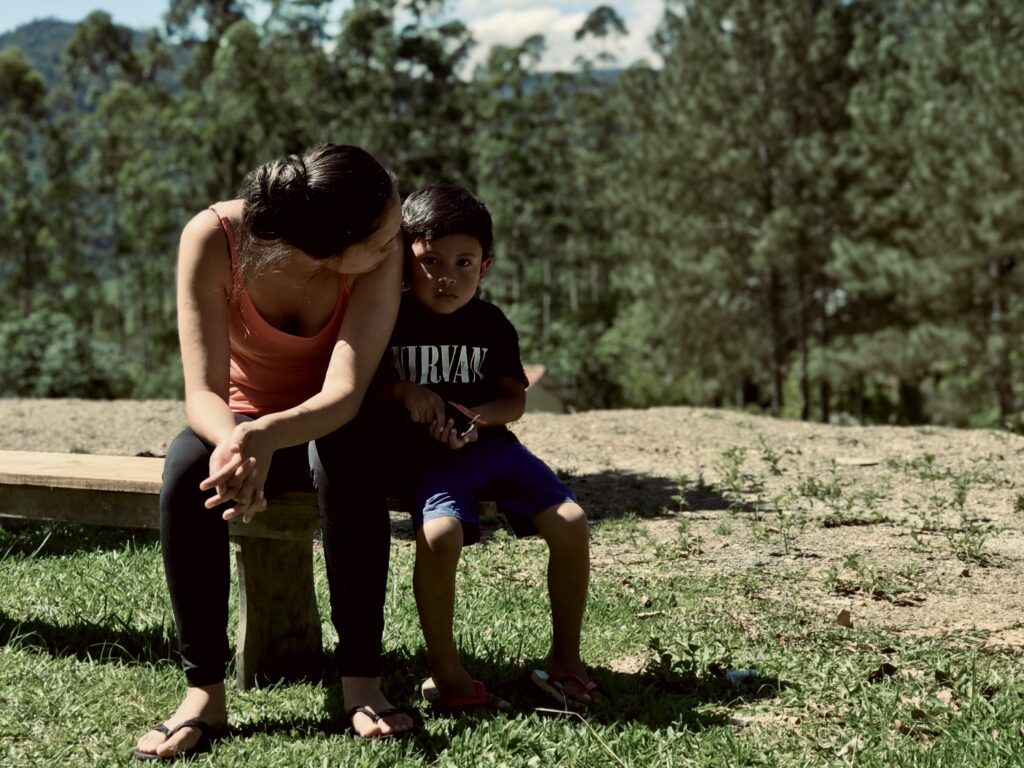 Kovi and Natasha Camlem who live in the Xokleng territory. Photo by Andressa Santa Cruz.

Andressa Santa Cruz is a Brazilian journalist who reports on social and environmental issues and Indigenous rights. https://santacruzandressa.wordpress.com/