This article was co-published with NACLA.

On Aug. 7, 2018, former senator Iván Duque — a relatively young politician with little experience — assumed office as Colombia’s president. Since then, his approval ratings have been dropping steadily. And now, he’s facing the seventh consecutive day of country-wide protests against his government.

Duque won the 2018 elections thanks to the blessing of the popular and widely controversial former president — and current senator — Álvaro Uribe. As part of Uribe’s Centro Democrático party, Duque ran on a platform of supporting entrepreneurship and opposing the peace deal signed by the government of Juan Manuel Santos and the FARC guerrilla in 2016, a deal that was lauded internationally, but remains divisive in the country.

Despite edging the firebrand left-wing candidate Gustavo Petro by 2 million votes in the presidential runoff, Duque’s numbers have never been great. His government began by pushing a tax reform that favored businesses — big or small — but hurt the middle class. By the end of 2018, Duque had one of the lowest popularity ratings in decades of a Colombian president in his first 100 days in office.

By October this year, after protesters in Bolivia, Chile and Ecuador took to the streets, many in Colombia began calling for a similar movement. Various union organizations formed the National Strike committee and a date was set: Nov. 21. The committee had come together on Oct. 4, made up of the country’s biggest unions as well as rural social organizations like Cumbre Agraria and the political Indigenous organization CRIC.

As the date approached, two scandals shocked the country: Semana magazine revealed on Oct. 27 that some members of the army created a WhatsApp group to follow and eventually murder Dimar Torres, a former FARC member who had rejoined civilian life thanks to the peace deal. Semana, the most widely circulated political magazine in the country, had recently been in the middle of a scandal in June when it was revealed that they had decided against publishing damaging information on the army.

Then, at an impeachment hearing in the Senate against Minister of Defense Guillermo Botero regarding the Torres case, Senator Roy Barreras showed evidence that an August bombing by the army had killed seven minors, which the army had tried to hide.

Botero resigned, but Duque only gave a brief apology and made small changes to his cabinet, which invigorated more people — at least if you believe the messages on Twitter — to take part in the planned strike against his government. On its website, the National Strike committee circulated an image listing reasons to join.

Organizers of the strike focused on reforms that the government has announced, but has not yet submitted to Congress, which is why specific details have not been released yet. The public knows only what was approved in the tax reform last year, which the Constitutional Court struck down in mid-October due to errors in the proceedings of its approval.

Some of the specific points argued by the National Strike committee, we found at Colombiacheck, were based on false or not entirely true facts. For instance, a frequently cited proposal to lower minimum wage for workers under 25 years old was not made by the government, but by ANIF, a financial institutions guild, and the government has opposed it. These points, however, became part of a rallying cry against “el paquetazo de Duque,” a wordplay that can either mean “Duque’s package of reforms” or “that useless Duque.” 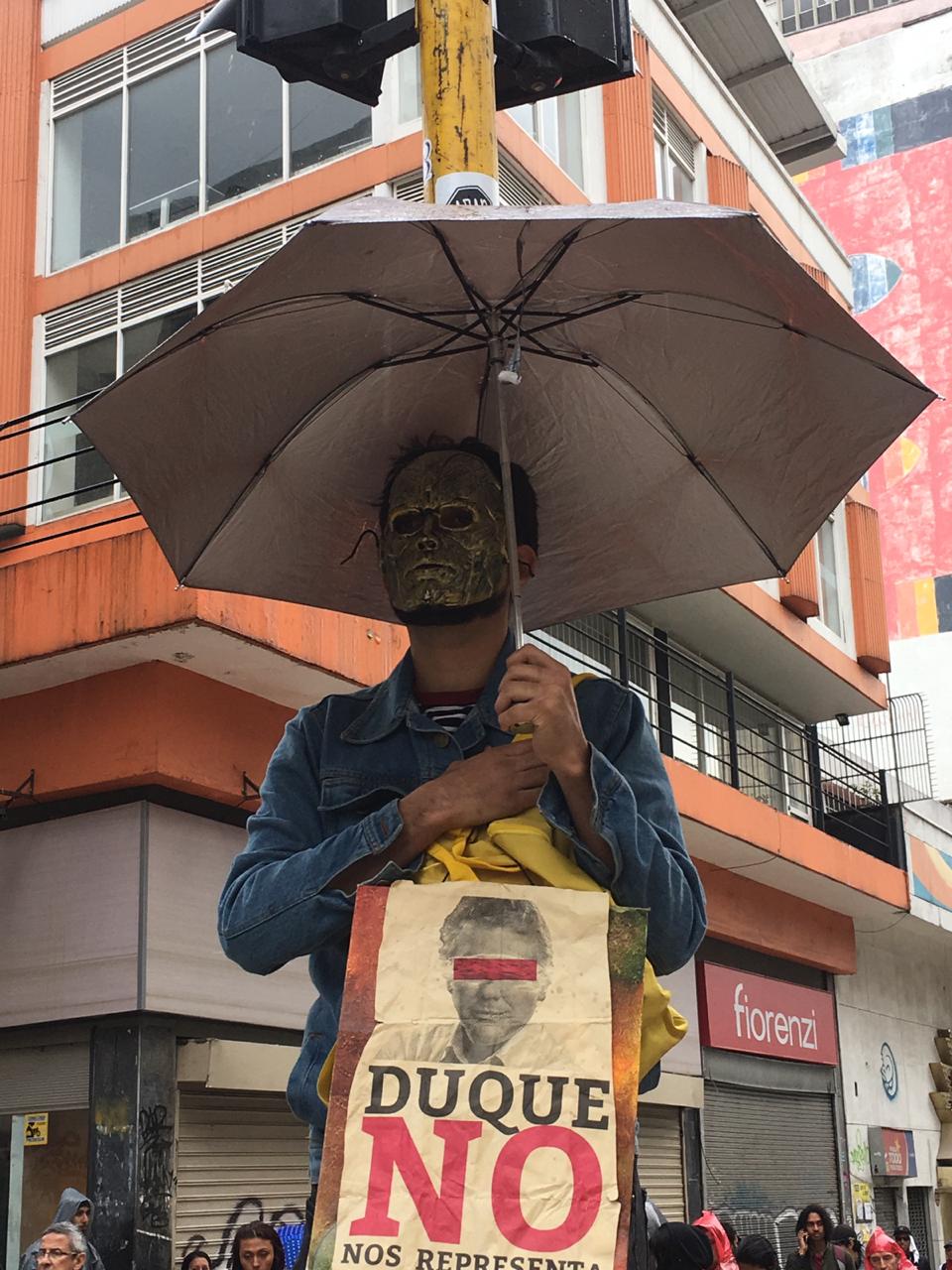 But the National Strike, even before it started, quickly grew beyond the organizing committee. Many decided to join because of other causes: support for public education, better public transportation, the country’s unequal health system and a general dissatisfaction with life in the country. And on Nov. 21, almost every city in the country took to the streets, despite a publicity effort from the government that repeatedly warned people about the dangers of protesting that day. The country’s borders were closed for the day and its armed forces were on high alert.

However, by 5 p.m. in Bogotá, fighting broke out between protesters and Esmad, the country’s anti-riot squad. Esmad threw tear gas into Bolívar square, the center of power in the city and the traditional gathering point of protests in the city. Esmad also evacuated other public spaces.

In the meantime, in Cali, Colombia’s third largest city, Mayor Maurice Armitage set a curfew after protesters blocked some roads and some looting took place elsewhere. During that curfew, reports of thieves taking over residential units started to circulate through WhatsApp . Later, both the Cali Police and the city’s security secretary, Andrés Villamizar, said that the videos were misleading and that very few cases of robberies had been confirmed, but that didn’t stop people from arming themselves and posting videos with their guns and neighbors, waiting for robbers that, mostly, never came.

That same night, with the frustration of the unfinished protests in Bogotá and the tension from the confusing news coming out of Cali, a call for a cacerolazo—a popular form of protest that involves banging on pans — began to circulate on WhatsApp and social media. It started slowly, but eventually most neighborhoods — even Duque’s in northern Bogotá — had people on the streets banging on their pots. Other cities joined, too, in a peaceful act of protesting, though demonstrations in Medellín and Manizales were repressed by Esmad. The cacerolazos spread through the country, in what many outlets described as a “historic” movement.

Duque spoke for six minutes that night, but instead of addressing the protesters’ concerns, he focused his speech on defending private property and extolling the work of the police.

The strike was planned for only one day, but the next day people took to the streets again in Bogotá as well as other cities. Meanwhile, Duque met with businesspeople before meeting with representatives from the strike.

Some civil society organizations  participating in the strike realized that a movement with momentum had begun and started to worry about the lack of focus. Many began to circulate their versions of a list of demands to present the government. The committee shared their 13 points, and a group called #CiudadaníaSinMiedo (“Citizens Without Fear”) shared 13 other points. Many less organized groups shared their pleas on social media. That day, though, no agreement was reached on the precise goals of the protests. 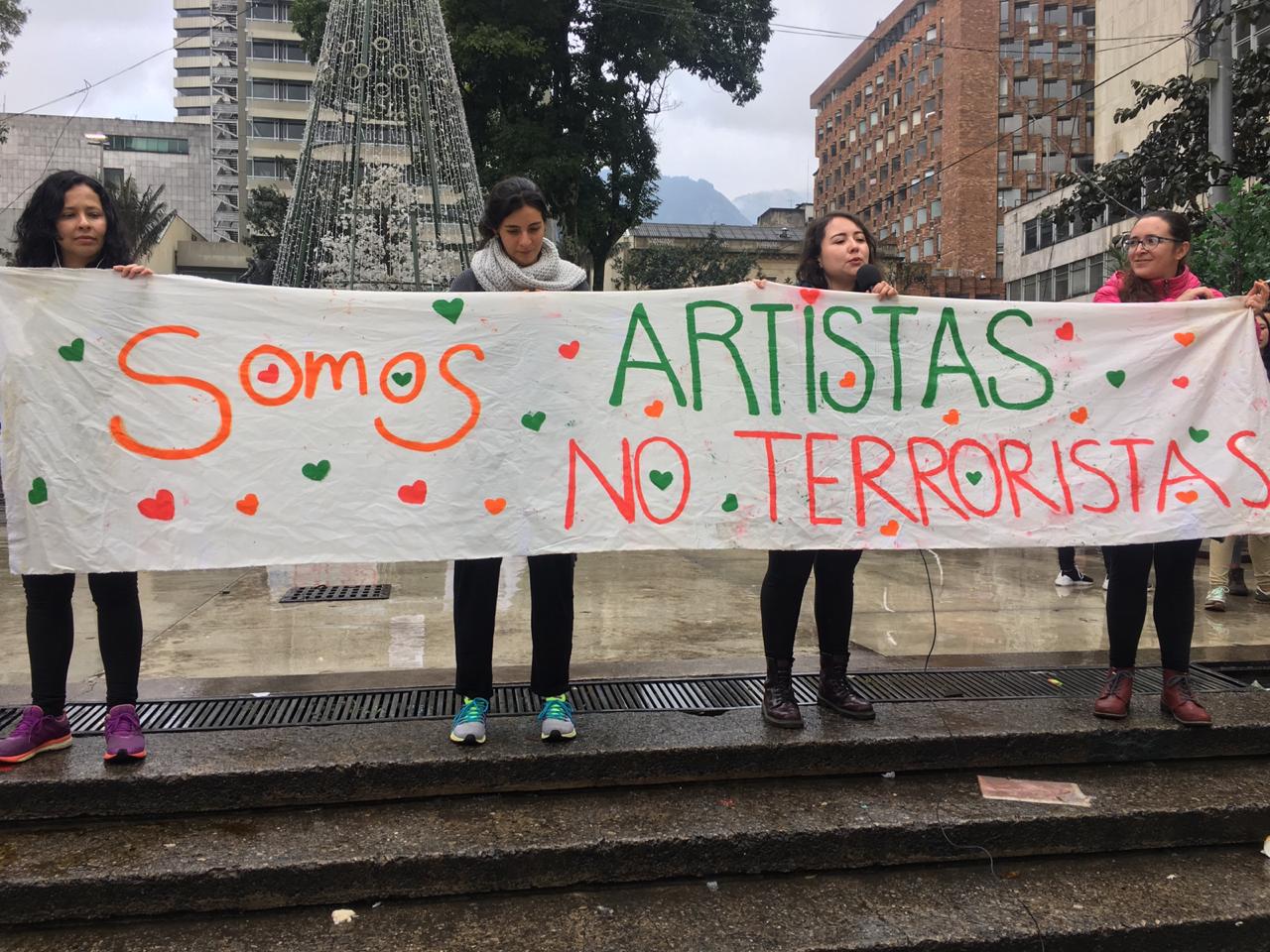 Despite the efforts from Bogotá Mayor Enrique Peñalosa to control the city, people began to loot in the capital. Like in Cali, this cannot be directly attributed to the protests. But these unsettling events, coupled with the damage inflicted upon the city’s mass transportation system — which was real but exaggerated by old videos circulated on social media — made Peñalosa set a city-wide curfew of 9 p.m., a measure that hadn’t been taken in the city since 1977.

Then, the same situation that Cali had experienced the day before repeated itself, even using the same videos circulating as “proof” that thieves were entering buildings in Bogotá. In one case, a video allegedly showed the police transporting and releasing the supposed thieves to cause mayhem in Bogotá. In reality, the video showed a truck bringing residents to their building in Cali. Still, disinformation flowed faster and people armed themselves with sticks and took turns throughout the night to “defend” their buildings. At night, Peñalosa warned Bogotanos not to trust content on social media regarding these supposed robberies, as they were “part of an orchestrated campaign.”

Amid the anxiety and the fear caused by this campaign, and despite the curfew, many people joined cacerolazos on the streets of Bogotá again, in Parque de los Hippies and Parkway and in front of Duque’s residence in northern Bogotá, as well as in other parts of the city.

That same night, though, a car bomb exploded in front of the police station of Santander de Quilichao, a town in the Cauca region, only an hour drive away from Cali. The explosion killed three police officers.

Cauca was one of the hardest-hit regions by guerrilla violence and is now facing a new wave of conflict, as new groups try to gain control of the drug routes abandoned by FARC. It was also the center of a large protest — called “Minga” — led by the country’s Indigenous population in March. The protest asked the government to comply with the peace deal and the promises made to Indigenous communities throughout the years.

Before the curfew and the bomb, Duque had addressed the country again and said that he was willing to open a “national conversation” to discuss some of the demands of the protest on Nov. 27.

After the bomb, though, everything changed. In the afternoon, some people were peacefully singing the national anthem in Bolívar square when Esmad deployed tear gas against them. Later, on the nearby Calle 19, 18-year-old Dilan Cruz was hit in the head by a projectile shot by an Esmad agent. He was taken to San Ignacio hospital, but the news travelled fast and people began to gather around the site of his attack to protest against police violence, his blood still on the ground. The protests around the country were reignited as many cities held cacerolazos through the night.

The next day, Duque seemed more open to a national conversation. However, in a tweet, he said he would give a deadline of March 15 for people to send suggestions for proposals around six topics, including education and anti-corruption efforts — all part of his presidential campaign. He also signed a decree creating a holding of certain state companies, which was one of the complaints in the criticism against his paquetazo. This angered many protesters, who felt that the president still was not addressing the urgency of the situation.

On Monday, continued protests coincided with a planned demonstration against violence against women in the Plaza de la Hoja in the west of Bogotá. While that protest was coming to an end, news came from San Ignacio hospital that Cruz’s status was “critical and irreversible.”  Soon after, it was reported that Duque had invited the National Strike’s organizers to the presidential palace to talk, although they declined.

Around 10 p.m. on Monday, Cruz was pronounced dead. Massive crowds gathered around the site of his shooting and in front of the hospital. Others took to the streets in Bogotá and around the country. After Cruz’s death, the strike committee agreed to meet with the government yesterday morning. The meeting, while short, prompted the committee to publish a set of proposals. They also called for a new national strike day today.

Even if the protests’ goals still aren’t clear, and even if its leaders are not yet defined, there is now a clear purpose: to fight for justice for Dilan Cruz. The movement seems to be just beginning.

Pablo Medina Uribe is a Colombian journalist based in Bogotá and currently the editor-in-chief of the fact-checking organization Colombiacheck, and co-founder of the bilingual narrative journalism magazine Huellas.