Jair Bolsonaro and his son Eduardo in Congress on April 1, 2014, the anniversary of the military coup. Bolsonaro, still a Congressman, held a Brazilian flag while protestors held up pictures of people disappeared in the dictatorship. Photo: Gustavo Lima / Câmara dos Deputados.

SÃO PAULO— The coronavirus outbreak in Brazil has already claimed 201 lives. But as the pandemic intensifies in Latin America’s most populous country, President Jair Bolsonaro discredits the journalists working to inform the public.

“People will know soon that a large part of the media have deceived them in this issue of the coronavirus,” he said in a March 22 television interview.

In the same week, Bolsonaro signed Provisional Measure 928, which suspends deadlines for public authorities and institutions to respond to requests for information. The measure would modify the 2011 Access to Information Law, which guarantees access to local, state and federal government records in the name of strengthening democracy.

Press freedom and robust journalism are essential during public health crises like the coronavirus outbreak. Yet the pandemic comes as right-wing President Jair Bolsonaro intensifies his attacks on the press. On the anniversary of Brazil’s 1964 military coup, which began a 21-year dictatorship, press freedom and the security of journalists are still under threat.

Brazil has one of the worst rates of impunity for murders of journalists worldwide. According to the Committee to Protect Journalists (CPJ), 25 journalists have been killed in Brazil in the past decade. In 2019, Brazil was the ninth on the CPJ’s Global Impunity Index, with 15 unsolved killings of journalists. Women journalists, like Patrícia Mello Campos, have been the subject of sexualized attacks and trolling.

Under Bolsonaro, Brazil is experiencing a phenomenon unprecedented since the country’s democratic transition in 1985. The president himself now publicly attacks, harasses and discredits journalists. Folha de S. Paulo journalist Patrícia Campos Mello has been a high-profile target of these attacks.

“I have been a journalist for over 25 years, and I covered conflicts all over the world, in Libya, in Syria, Iraq and Afghanistan. I never needed a bodyguard,” she said in her acceptance speech. “Yet, when I was covering the elections last year in my hometown of São Paulo, Brazil, I needed a bodyguard.” 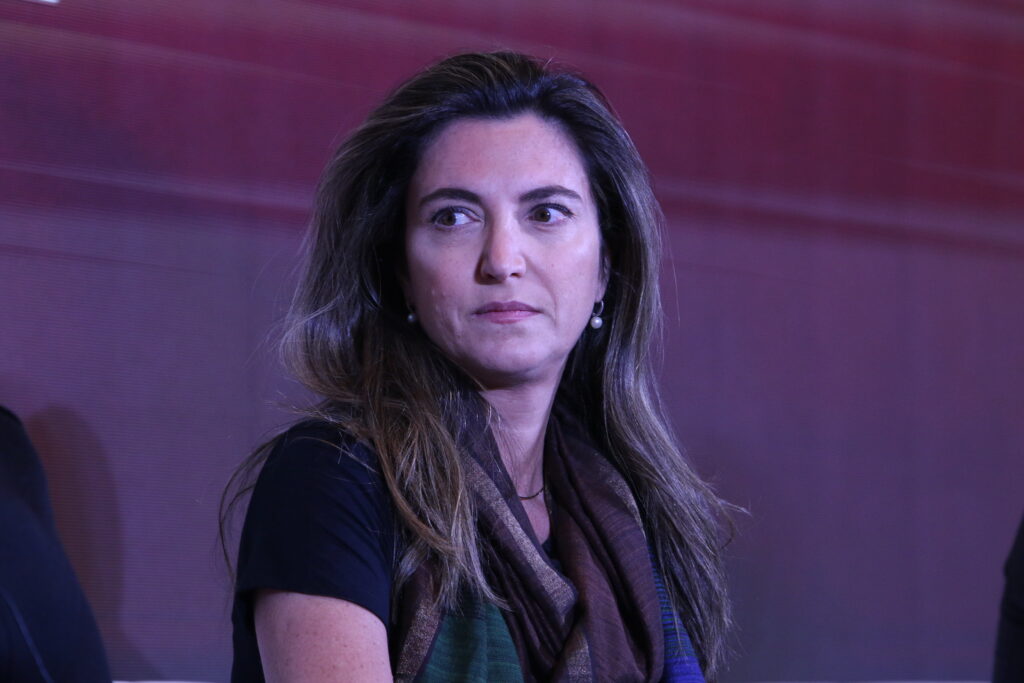 In October 2018, polarization around the presidential elections had increased the number of attacks against the press. Bolsonaro won the first round of voting on October 7. On October 18, Folha de S. Paulo, a respected local newspaper, published an investigation by Campos Mello showing that business supporters of then-candidate Jair Bolsonaro had funded illegal mass messages against his opponent, São Paulo former mayor Fernando Haddad. Social media users showered Campos Mello with insults and threats and her WhatsApp was hacked.

More than a year later, Campos Mello was subject to a second round of online hostility. During a February 2020 Congressional hearing, Hans River Rio do Nascimento, a source for her reporting about the campaign messages, said that she had offered to trade sexual favors for information. Nascimento didn’t present any evidence to back this claim. Copies of the messages he exchanged with Campos Mello showed that his version was a lie. But once more, Bolsonaro’s supporters attacked the journalist with sexist insults on Twitter.

President Bolsonaro and one of his sons, Congressman Eduardo Bolsonaro, have repeated similar sexual insinuations about Campos Mello during public speeches.

Campos Mello’s case is a high-profile example of what happens each day to hundreds of journalists in the country. A recent survey found that during 2019, Brazilian professional media suffered 4 million virtual attacks, an average of 11,000 attacks every day. According to the report, conservative social media profiles and websites were responsible for many attacks, as many as six every minute.

In the first months of 2020, Bolsonaro has repeatedly lashed out against the press.

“You [journalists] are an endangered species,” he said on January 6 in front of the presidential palace.

A month later, Bolsonaro told companies not to advertise in Folha de S. Paulo and the magazine Revista Época.

On March 13, during a Facebook livestream, he told his followers, “Don’t believe in the media.”

According to a survey by the National Federation of Journalists (Fenaj), the far-right president had been responsible for 60 percent of attacks on journalists recorded last year. Fenaj documented 121 cases linked to the president.

Brazilian President Jair Bolsonaro in a press conference with the Ministry of Health on March 20th. Photo courtesy of Flickr account Palácio do Planalto.

In December, Congresswoman Joice Hasselmann, revealed the existence of a digital militia that spreads threats and attacks against government critics. Dubbed “the hate office,” it is made up of close Bolsonaro advisers, who are responsible for managing the president’s digital campaigns and spreading fake news. They also publish attacks against journalists on a large scale.

Reporters Without Borders (RSF) put Jair Bolsonaro’s “hate office” as one of the 20 press freedom’s digital predators in 2020. The list brings together companies and government agencies that use digital technology to spy on and harass journalists.

Abraji recorded more than 80 cases of violations against communicators and the media during 2019, the first year of Bolsonaro’s presidency. The incidents include insults, doxxing, virtual lynching and physical attacks. In the first three months of 2020, the organization had reported at least 14 cases.

“This rhetoric also erodes the population’s confidence in professional journalism and spreads the notion that reporters are enemies of the country and, therefore, enemies of the people,” said Träsel.

A history of press repression

Press freedom is a long-standing issue in Brazil. Between 1964 and 1985, Brazil’s military dictatorship shut the Congress, disrupted democracy and persecuted dissidents. Five different military generals have occupied the presidency. While some major newspapers supported the regime, other smaller papers had tried to overcome censorship and denounce the crimes of the dictatorship.

At least 22 journalists were murdered during the military dictatorship, cases that remain unsolved until today. On March 16, 2020, 45 years after the crime, six former members of the country’s military dictatorship were charged with the murder of Vladimir Herzog, a prominent journalist. Vlado, as he was known, died in 1975 after being tortured by military intelligence officials, who tried to frame his death as a suicide.

It was not until 2009 that the Brazilian Supreme Court struck down the repressive Press Law that was adopted by the dictatorship. The law authorized prison and fines for media outlets that offended “morals and good manners,” especially if it involved public authorities.

Thirty years of democracy and civil rights have passed since the dictatorship. But the shadow of violence against the press remains. Bolsonaro was an army captain and as president, he has praised the dictatorship.

Women journalists experience some of the worst attacks.

“The sexually suggestive comments repeat a pattern that has already existed in society against all women,” said Janaina Garcia, Brazilian journalist and a co-founder of the Journalists Against Harassment collective (Jornalistas Contra o Assédio). “But what we see now is a completely new degree.  The recent attacks were made by public officials, the ones who should set an ethical and moral example for the population.”

Garcia said that female journalists, from large and small news outlets, suffer the indirect consequences of these incidents.

“Self-censorship is the natural path for many of them. [These attacks are] very harmful for press freedom, for democracy and for freedom of speech,” she said.

In February, Journalists Against Harassment created a petition calling on Twitter to remove hate and harassment posts against journalists, which now has more than 13,000 signatures.

While the institutional attacks continue, reporters continue to do their job informing the public. When journalists reveal the misdeeds of politicians, they attempt to discredit the journalists themselves.

“History shows that the press has an important role in protecting citizens against government abuse,” said Marcelo Träsel of the Brazilian Association for Investigative Journalism. “No wonder authoritarian regimes of the left and right make a big effort to suppress journalistic activity.”

Journalists and Bolsonaro supporters often encounter each other outside the presidential palace. When Bolsonaro emerges to take questions from the press, his supporters interrupt reporters and swear at them.

Yesterday, a supporter interrupted the press conference and accused the reporters of fueling fights between Bolsonaro and his ministers. The president spoke over the reporters and told them to listen. But this time, journalists did not wait passively. Some of them turned away and left, refusing to put up with the abuse.

To the applause and laughter of his supporters, Bolsonaro hurled one more insult: “It’s the press that doesn’t like the people.”

Mayara Paixão is an undergraduate journalism student at University of São Paulo, Brazil. She has been covering human rights, social movements across Latin America and freedom of expression.