A group of people wait for transportation at a bus stop in Managua on March 13. Photo: Carlos Herrera.

MANAGUA— Across Latin America, Holy Week is a time for vacations, church celebrations and family gatherings. That tradition will be broken this year, as most countries restrict travel and mandate that people stay home to stop the spread of the coronavirus.

Nicaragua is the exception. While the Bishops Conference of Nicaragua suspended all processions to avoid an outbreak of COVID-19, the government of Daniel Ortega has invited Nicaraguans to participate in a music festival, open air masses and religious activities this Holy Week.

Ortega and his Vice President and wife, Rosario Murillo, have dismissed the risks of COVID-19 to the Central American country. Their hermetic response and lack of transparency in the face of the pandemic has alarmed epidemiologists and public health experts. COVID-19 has caused first-world health systems to buckle under the pressure, but the second-poorest country in Latin America waits with its arms crossed for a tragedy of great dimensions.

The Health Ministry has not reported the number of tests that they have carried out. The authorities have refused to declare a quarantine or suspend classes at public schools, because they consider these to be “alarmist and extremist” measures. Nor have they ordered the closure of borders, even though the five confirmed cases have all entered at the international airport of Managua.

“These are the contradictory and inexplicable things that happen in Nicaragua,” Dr. Milton Valdéz, the former Director of Epidemiology and former Vice Minister of Health during the 1980s in Nicaragua, told LAND. “The key is protecting the people. To gather hundreds of people when the virus is already present in Nicaragua is an irresponsible attitude.” 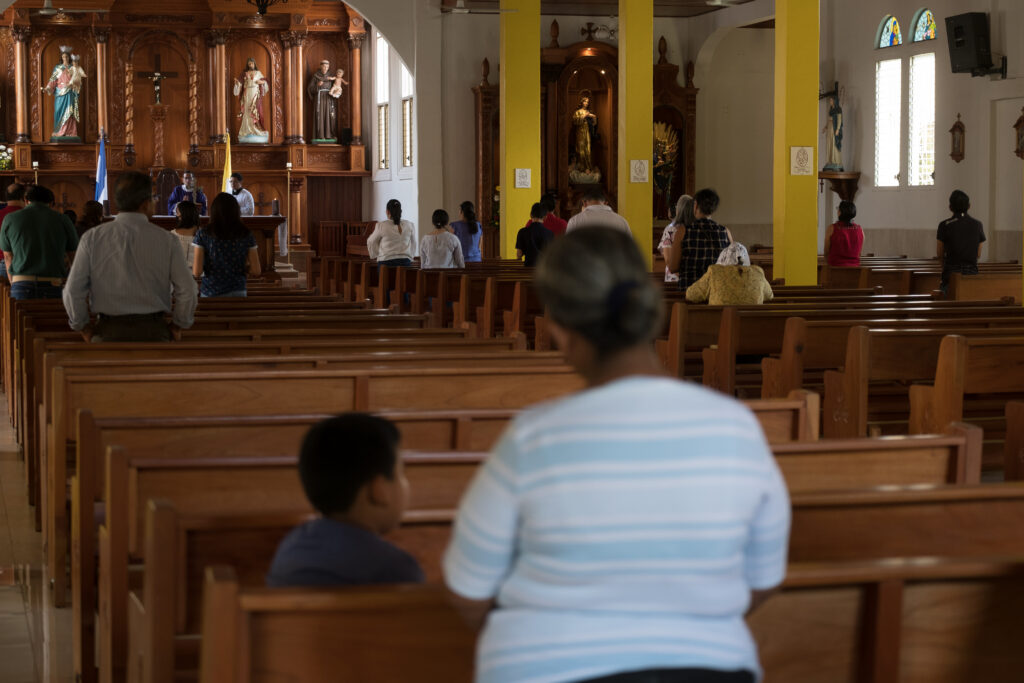 Few of the Catholic faithful attend Sunday mass on March 22 in a church in Managua after the first case of Covid-19 in Nicaragua was confirmed three days earlier. Photo: Carlos Herrera.

On March 22, a Facebook live transmission from a woman suspected of having COVID-19 captivated social media users in Nicaragua. The woman escaped from quarantine at Nicaragua’s Alemán Hospital. She claimed negligence and a lack of information.

“I’ve been shut in for more than 24 hours and they haven’t given me the test result,” she said in the Facebook Live. The woman had contact with the person who was the second confirmed case of coronavirus in the country.

Vice President Murillo appeared on television that night to calm the fears that the woman’s escape had provoked. Murillo sought to lift the blame from health officials. But distrust in the Sandinista government’s response to the pandemic had already been planted weeks earlier.

The vice president speaks in abstract terms and in a mystical, religious tone when discussing the public health crisis.

“As the Nicaraguan family we know that through trust and faith in God, we can go forward, peacefully, calmly, patiently, responsibly…” Murillo said in a midnight address.

“Above all, believing in the Lord and knowing that faith defends us and will save us.”

The government has failed to share key information with the public, such as the number of ventilators available in hospitals to attend to seriously ill patients. The Health Ministry has not made its projections about the pandemic public. It was only through a leak that the public learned about a document that the Health Ministry sent to the executive branch, warning that the virus could causes “32.500 affected people and 813 deaths” in six months.

Despite the advice of its own health authorities, the government has not put into place the measures of social distancing that the World Health Organization recommends. Instead, the administration surprised everyone on March 14, when it ordered Sandinista sympathizers and state workers to take part in a massive march, which Murillo christened “Love in Times of Coronavirus.” The attendees repeated that “with love” they will overcome the pandemic. 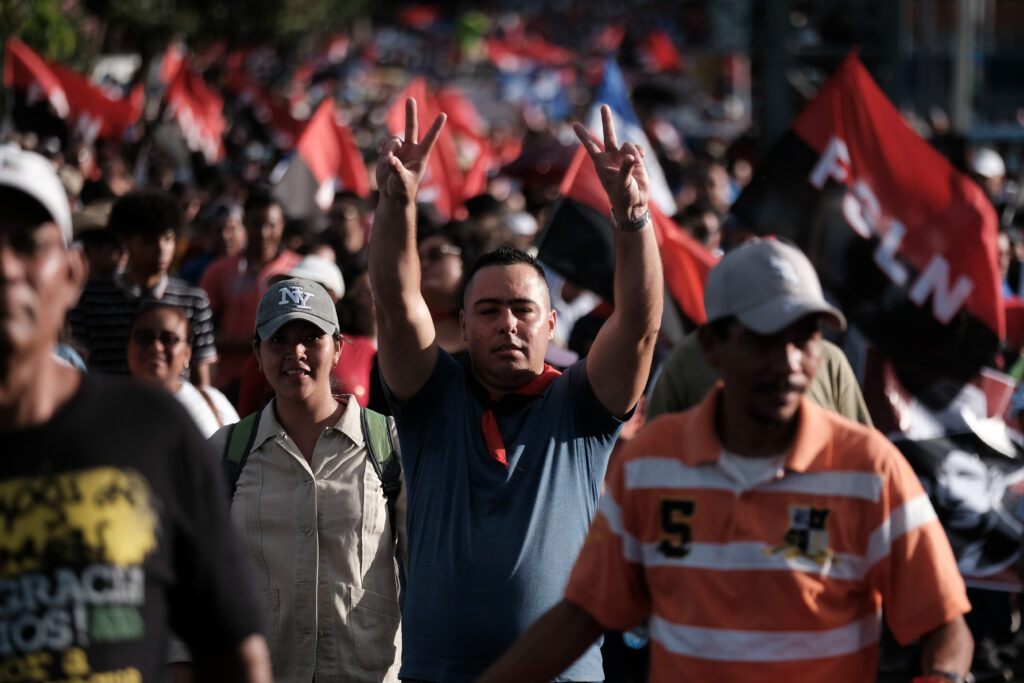 A group of supporters of the governing party Frente Sandinista de Liberación Nacional (FSLN) participate in a march on March 14. Five days after this march the government announced the first positive case of COVID-19 in the country. Photo: Carlos Herrera.

Nicaraguans are not waiting for government orders

Since the first case of COVID-19 was confirmed in the country, some Nicaraguans have chosen to self-quarantine. In the main cities of Nicaragua, the streets, malls, shopping plazas and markets are quiet. Private schools have suspended in-person classes. Even though the Ministry of Education insists that going to classes does not present a risk, public school attendance has gone down,

Bimarck Rodríguez and Katherine Ramírez are two young professionals who live in Tola, a municipality in southern Nicaragua, famous for its beaches. They both decided to self-quarantine to avoid contracting the virus.

“Even though there are no state-issued prevention measures, we have gone more than two weeks without going out to avoid contagion,” the couple said. “We just went out once to buy food and provisions.”

According to Dr. Valdéz, the principle responsibility to prevent and mitigate the pandemic should be with the public authorities.

“They have to communicate with the population completely transparently and educate people so that they take the pertinent measures,” the specialist said. “We need collective action against the pandemic.” 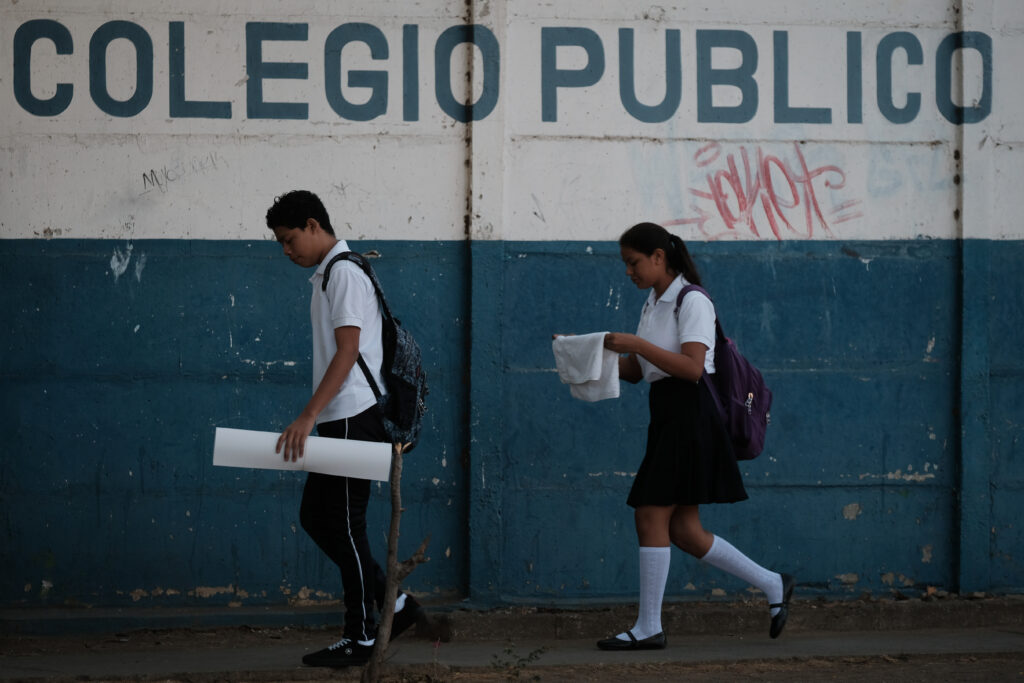 Two students attend classes at a public school in Managua on March 31. Due to the world crisis caused by Covid-19 many parents have chosen not to send their children to classes even though the Ministry of Education has not cancelled the classes. Photo: Carlos Herrera.

At the time of publication, Nicaragua had registered five confirmed cases of COVID-19. One patient has died, and one was released from the hospital. According to the Ministry of Health, they have done about 200 tests and are monitoring 14 “suspected cases.” However, doctors at public hospitals have anonymously reported that they have told the authorities about dozens of other suspected cases of coronavirus.

“They are treating everything related to COVID-19 like a state secret,” said a doctor at the Nicaragua Alemán hospital, who asked not to be named.

Doctors report that the authorities have told them not to use masks and personal protective equipment when treating patients, under the argument that these measures “cause alarm.” The medical personnel worry about getting sick themselves, as has happened in countries like Spain. 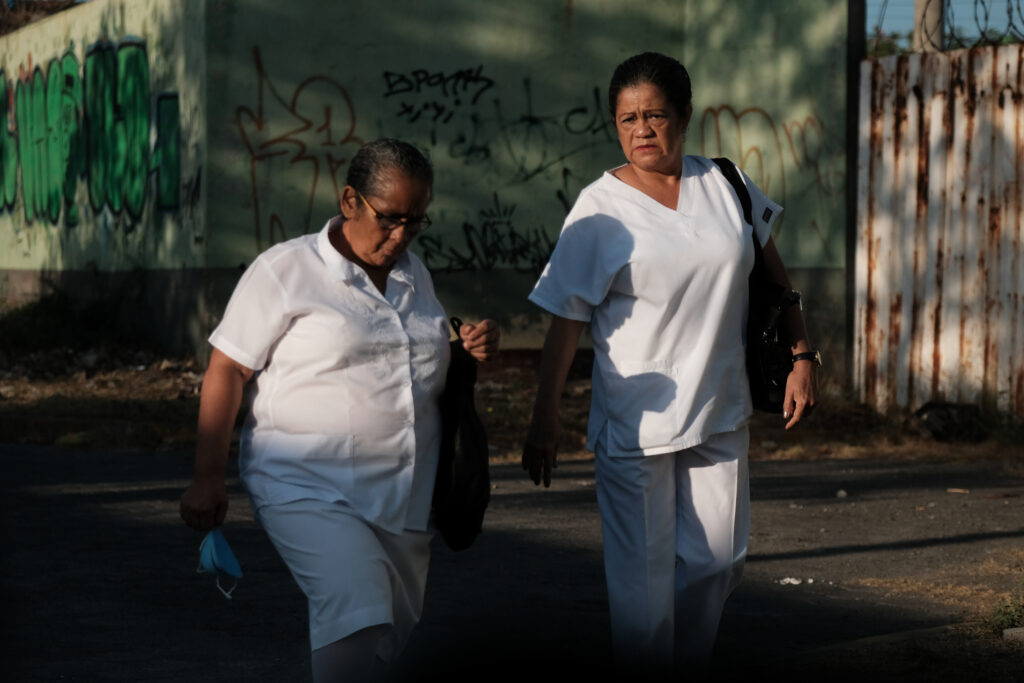 Two workers from a public hospital in Managua on their way to work on March 31. Health personnel from public hospitals have reported that they are not allowed to use health protection equipment. Photo: Carlos Herrera.

An independent group of physicians, including epidemiologists and public health experts, formed the “Scientific Multi-disciplinary Coronavirus Approach Committee.” In their first communique, they urged the government to guarantee personal protective equipment for medical professionals and to train them in its use to avoid infections. The Ministry of Health has not responded to the complaints from hospital workers.

The Inter-American Commission on Human Rights has warned against the government’s approach. The organization expressed, “profound concern” for the possible impacts of COVID-19 if the government does not act.

“We call on the state to disseminate complete and accurate information about prevention, resources and the Covid-19 situation, with transparency, rigor and impartiality,” the Commission stated.

The chief executive, President Daniel Ortega, has not shown his face during these debates. Ortega has not referred to the COVID-19 pandemic a single time. On March 12, he participated in a teleconference to address the pandemic with his regional counterparts, organized by the Central America Integration System (SICA). But in his speech the Sandinista leader didn’t say a word about his government’s prevention or mitigation plans.

In Daniel Ortega and Rosario Murillo’s Nicaragua, authoritarianism and secrecy are a breeding ground where COVID-19 may thrive. 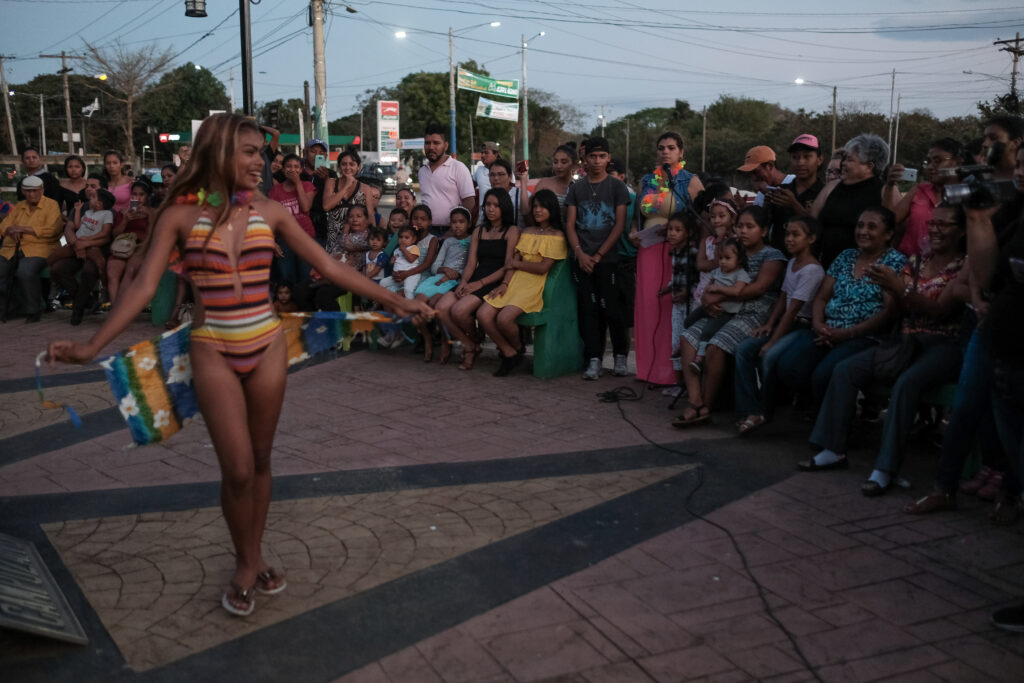 A group of people gathered in the city of Nindirí on March 29 to elect Miss Summer 2020, an event promoted by the municipality, and held in a public park in the city. At least a hundred people gathered to support their favorite candidates. Photo: Carlos Herrera. 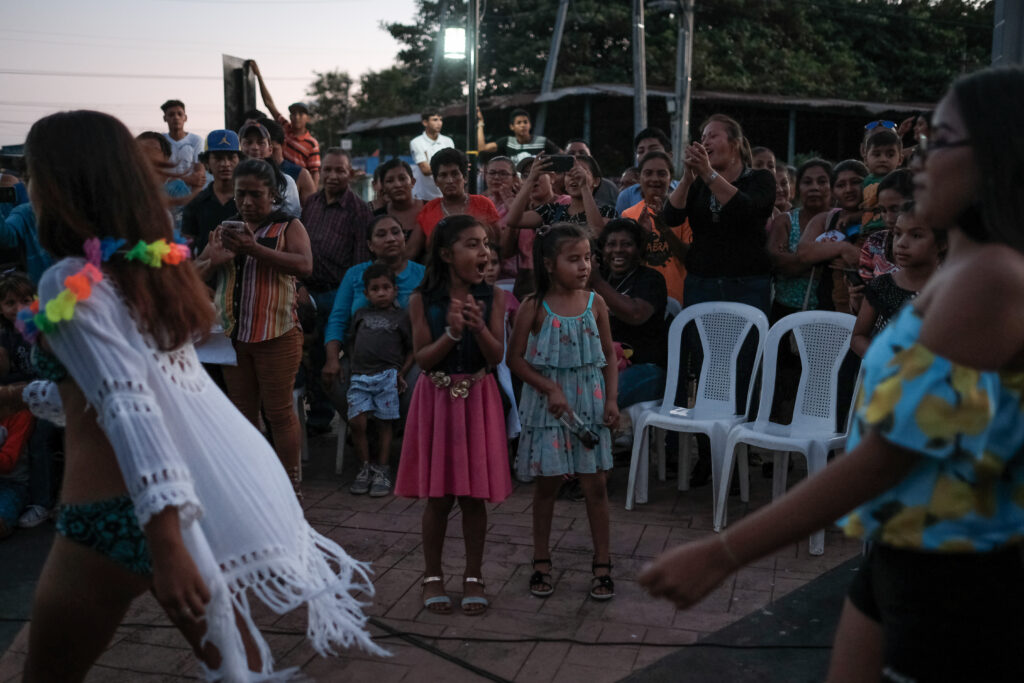 Two girls in the middle of the audience applaud with emotion when they see the candidates of the Miss Summer 2020 contest parade. Photo: Carlos Herrera. 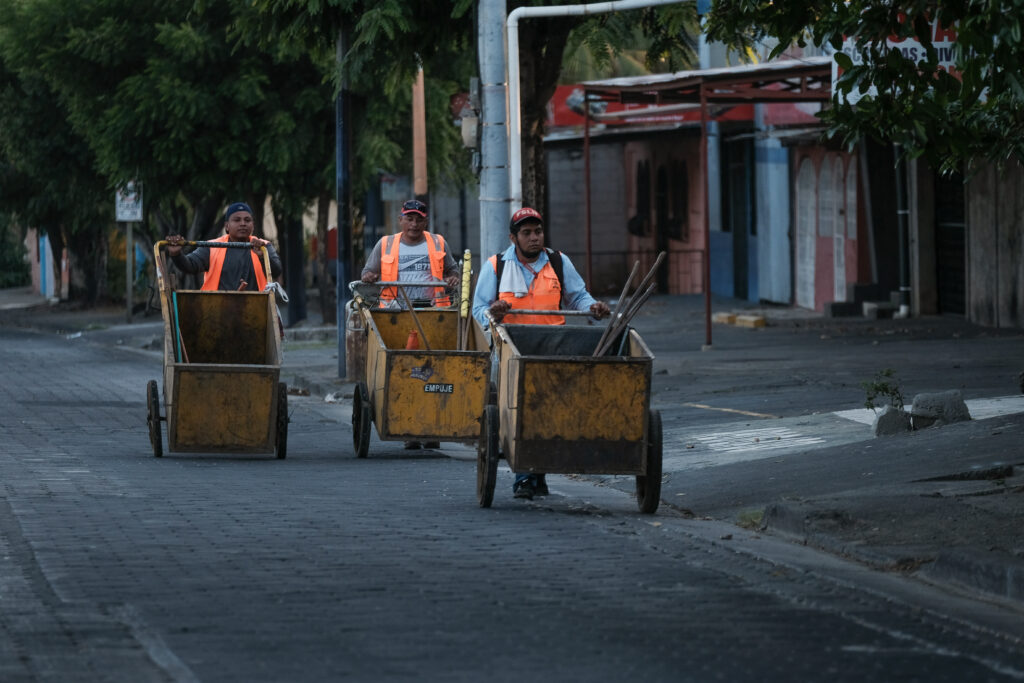 Three workers from the Managua City Hall start their work day on March 31. Public employees are prohibited from wearing masks to protect against COVID-19 so as “not to generate panic among the population,” according to the government. Photo: Carlos Herrera. 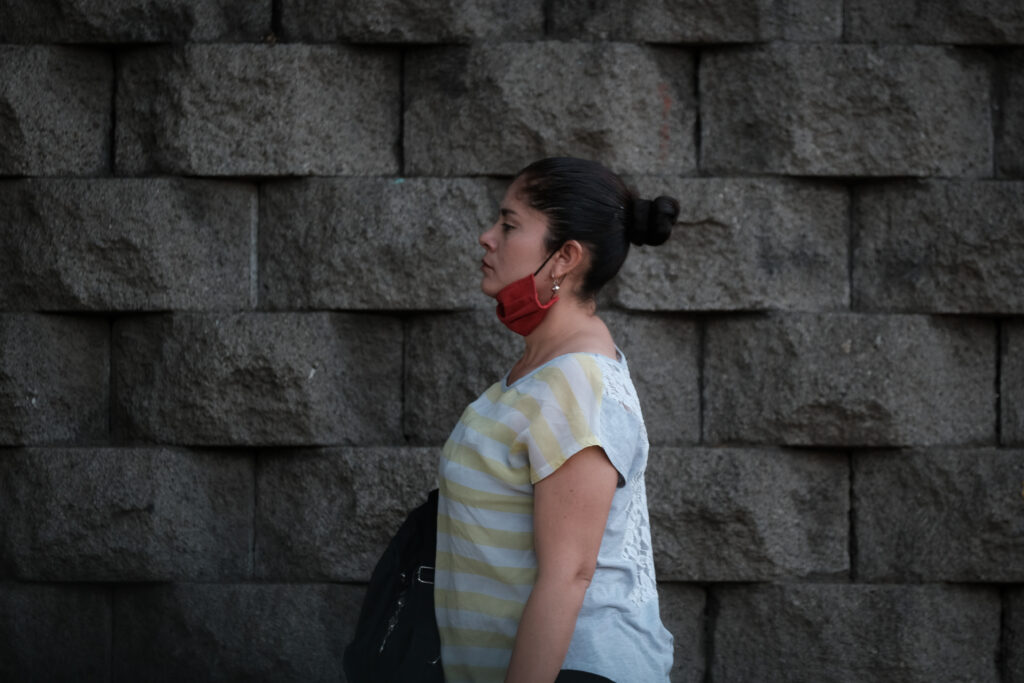 A worker in a free zone in Managua walks down the street on March 31. Photo: Carlos Herrera. 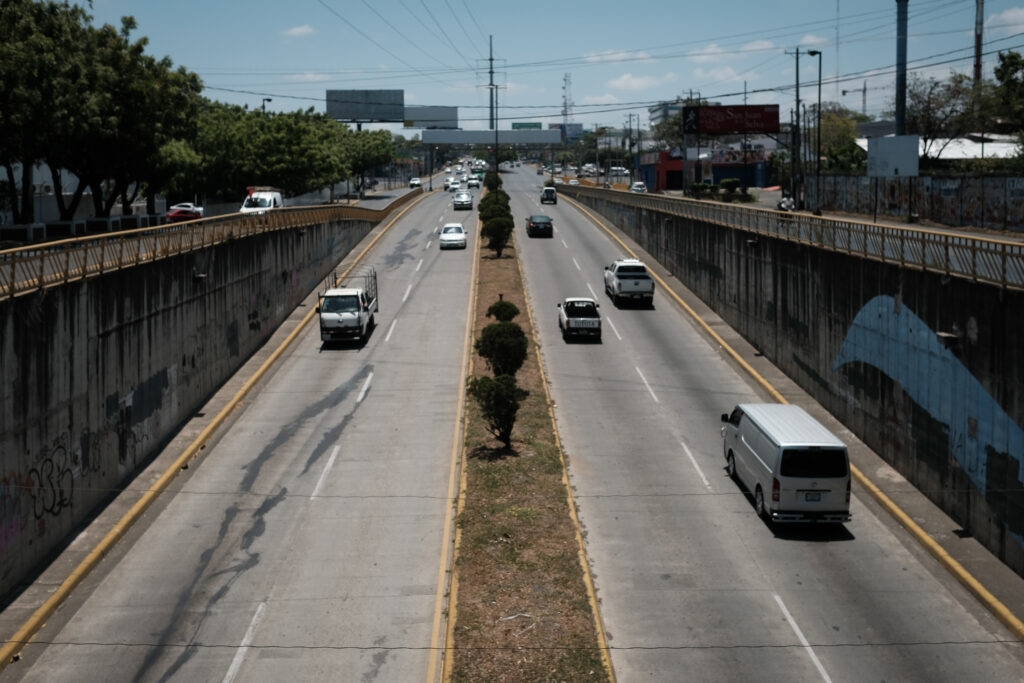 On March 31, there are fewer vehicles circulating in the capital Managua, but there are still no deserted streets. Photo: Carlos Herrera.

Carlos Alberto Herrera González is a photojournalist in Managua, Nicaragua. He graduated in Social Communication from the Universidad Centroamericana in Managua. Herrera is a correspondent photographer for the newspaper El País and the German Press Agency DPA.

Ecuadorian Authorities Slow to Remove the Deceased from Homes