As global coronavirus cases climb above 1.5 million and deaths pass 94,000, heads of state are desperate to curb the disease’s reach. Latin American governments have taken a variety of steps to restrict citizens’ movements as an effort to flatten the curve, the latest being a gender-based quarantine implemented in Panama and Peru. Under these measures, the two countries have segregated citizens by gender in order to lower the number of people outside of their homes on any given day. Yet, in assuming that the Panamanian and Peruvian societies are purely binary, trans communities have been rendered further invisible.

On March 30, President Laurentino “Nito” Cortizo expanded Panama’s national quarantine and announced that, starting on April 1, women would only be allowed to go outside on Mondays, Wednesdays, and Fridays. Men, on the other hand, would have to run their errands on Tuesdays, Thursdays, and Saturdays. Everyone must remain at home on Sundays barring an emergency after Panama surpassed 2,528 confirmed cases and 63 deaths. Additionally, movement will continue to be restricted through a schedule based on the last digit on each citizen’s national identity card, as established on March 24.

Panamanian authorities have been instructed to enforce the measure based on the sex listed on an individual’s identity document. According to Panamanian lawyer Iván Chanis Barahona, the binary division constitutes a violation of human rights in erasing the existence of trans individuals. Given that Panama doesn’t have any type of anti-discrimination laws to protect members of the LGBTQI community nor a gender identity law, the measure leaves trans Panamanians unable to step outside on either gender-designated day. 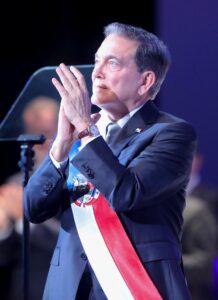 “You go outside based on what your identity card says, and they discriminate against you,” said Chanis Barahona, president and founder of Fundación Iguales, a nonprofit organization that promotes respect for human rights, equality and tolerance. “You go outside based on how you identify and how others perceive you, and they still discriminate against you.”

The government’s lack of protocols to protect trans individuals has created an atmosphere of panic and terror within Panama’s trans community. Instead of addressing this fear, on April 4, Panama’s Vice Minister of Public Security, Ivor Pitti, insisted that trans citizens adhere by the sex listed on their identity cards and go outside accordingly. Though trans Panamanians have the right to change their legal gender since 2006, modifying official documents requires the individual to have undergone sex reassignment surgery.

“These measures are a registry of how the state deals with the LGBTQI population,” added Chanis Barahona. “They had the opportunity to innovate, to sensibilize, but in not including us, in making us invisible, it’s been a setback. This is based on the idea of Adam and Eve.”

For trans activist Pau González, who is the president and founder of the organization Hombres Trans Panamá, the situation calls for mobilizing resources to support trans individuals through this quarantine.

To that end, Hombres Trans Panamá created an online forum in which trans people who have been detained and discriminated against because of the measure can report the incidents. These entries, González said, will later be used as evidence to demonstrate the importance of issuing identification documents to trans people that match their gender identity.

Both Chanis Barahona and González pointed out that Cortizo could have used the pandemic as an opportunity to officially recognize the existence of trans individuals in Panama and promote their rights. Both activists referenced Peru as an example of how the president could have reassured trans people that their rights would not be violated under the new measure.

President Martín Vizcarra announced on April 2 that Peru would be instituting a gender-based quarantine until at least April 26. Men would be allowed outside on Mondays, Wednesdays, and Fridays while Tuesdays, Thursdays, and Saturdays would be reserved for women. Much like in Panama, everyone must remain home on Sundays.

During the president’s announcement in his daily message to the nation, Vizcarra emphasized that discrimination would not be tolerated under the new law. This is written into the law, though it does not specify transphobia. Vizcarra added that the measure in Peru, where there are over 5,256 positive cases and 138 deaths, would be enforced based on visual confirmation of gender instead of checking identification documents. Unlike Panama, Peru already has anti-discrimination laws in place to protect the LGBTQI community.

Gabriela Oporto, a strategic litigator for the feminist organization PROMSEX Peru, recognized that Vizcarra has tried to ease the fear of trans Peruvians. But she added that instances of discrimination persisted in the first two days of the measure despite the government’s warnings.

“We warned that this would happen,” said Oporto, emphasizing that the Peruvian government did not take any precautions to prevent discrimination. She added that training Pervuian authorities and educating people to respect the rights of trans people will take time.

“It can’t happen overnight even for us who are members of the LGBTQI community,” Oporto said.

However, she acknowledged that since the policy went into effect, the government has taken steps to combat discrimination. After the first reports of discrimination emerged, Peru’s Minister of the Interior Carlos Moran, who oversees the country’s national police, posted a statement on Twitter, saying that the ministry condemns any type of discrimination against the LGBTQI community. Peru’s National Police, for its part, tweeted that it would investigate instances of discrimination and sanction those responsible.

Even after the initial mistakes, Oporto hopes that Peru will build on this rapid response to further promote public policies and laws that benefit the trans community, such as a gender identity law. “Let’s hope that after the pandemic, the government shows that they are truly committed to these rights.”

Paola is a trilingual journalist bouncing between New York, Puerto Rico, and Madrid. She covers Latin American politics with an expertise in Puerto Rico, her home, and has bylines in Americas Society/Council of the Americas, LAND, and more. Paola graduated with honors from NYU in 2020 with a B.A. in Journalism and Politics. She’s now pursuing a master’s degree in Journalism at the Universidad Autónoma de Madrid-El País program in Spain.