On January 5, 2020 journalists were harassed at the National Assembly. Photo by Ivan Reyes.

CARACAS— Authorities are clamping down on journalists informing the public about the coronavirus pandemic. Press freedom in Venezuela was already threatened, and as the public health crisis progresses, the government has punished calls for transparency.

Since social distancing measure began on March 16, state security agencies controlled by President Nicolás Maduro have detained 18 journalists and 34 press workers have suffered different forms of attacks. Radio hosts Jesús Enrique Torres and Jesús Manuel Castillo were arrested in Los Teques, Venezuela on March 13 after publishing a video on Facebook about alleged coronavirus cases at a local hospital. They were released after being charged with “crimes against the state.” In Caracas, Venezuelan special forces detained freelance journalist Darvinson Rojas on March 21, after reporting on COVID-19 cases.

The longstanding problem of press freedom in Venezuela is becoming more urgent during the coronavirus outbreak. Venezuela has one of the lowest rankings in the World Press Freedom index. In 2019, Venezuela was ranked 148 out of 180 countries. Journalists are banding together to support each other and continue reporting despite hostility from state authorities. 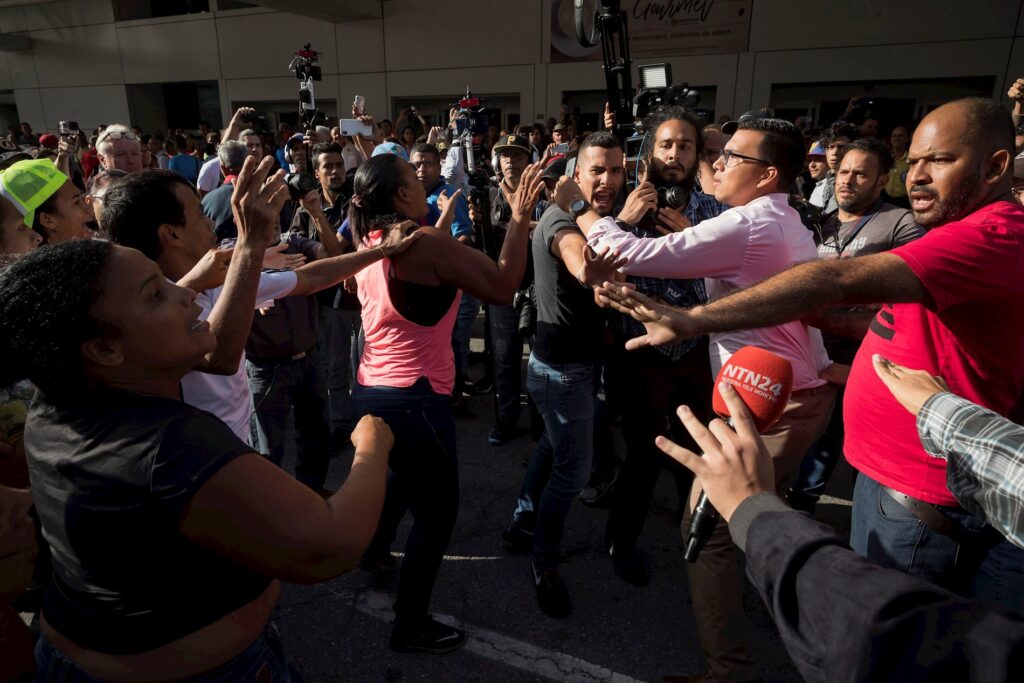 Reynaldo Mozo, a reporter for the digital outlet Efecto Cocuyo, started having nightmares two days after he was attacked by Chavista shock troops at Caracas’s Maiquetia airport. He remembered how he fled from the crowd while a man beat his reporting partner, Ivan Reyes, with a motorcycle helmet. He remembered the faces of his aggressors.

On February 11, Juan Guaidó, who claims to be the legitimate leader of Venezuela, returned from an international tour. The journalists covering Guaidó’s arrival at the airport saw approximately fifty people wearing red shirts, associated with Maduro’s party, started to appear from every corner of the airport.

Pro-government groups threatened the parliamentarians and cornered the press workers. Both sides started yelling at the other and then a fight moved to the loading zone. Maduro supporters attacked the press workers, hitting their cameras and their bodies. Reynaldo Mozo and Iván Reyes were two out of twelve journalists attacked that day. At least two journalists sought hospital care for their injuries.

“My heart was racing,” Mozo says. An airport passenger drove Mozo and Reyes out of the airport and to the plaza where Guaidó was giving a speech. “We continued to cover the news.”

On February 13, the Press Workers Syndicate and the non-profit Espacio Público reported the events to the Attorney General, Tareck William Saab. The Committee to Protect Journalists also denounced the attack. Two months later, none of the perpetrators have been held accountable. To the contrary, attackers have been celebrated.

Reynaldo Mozo identified one of the aggressors at the airport as David González, a Chavista youth leader and state coordinator of the Disarmament Service. On February 16, Maduro congratulated González on his Facebook page and described him as a Venezuelan “pride and example of perseverance” for his work in the State of Vargas.

“The people that attacked us are backed by the highest levels of government,” Mozo says. 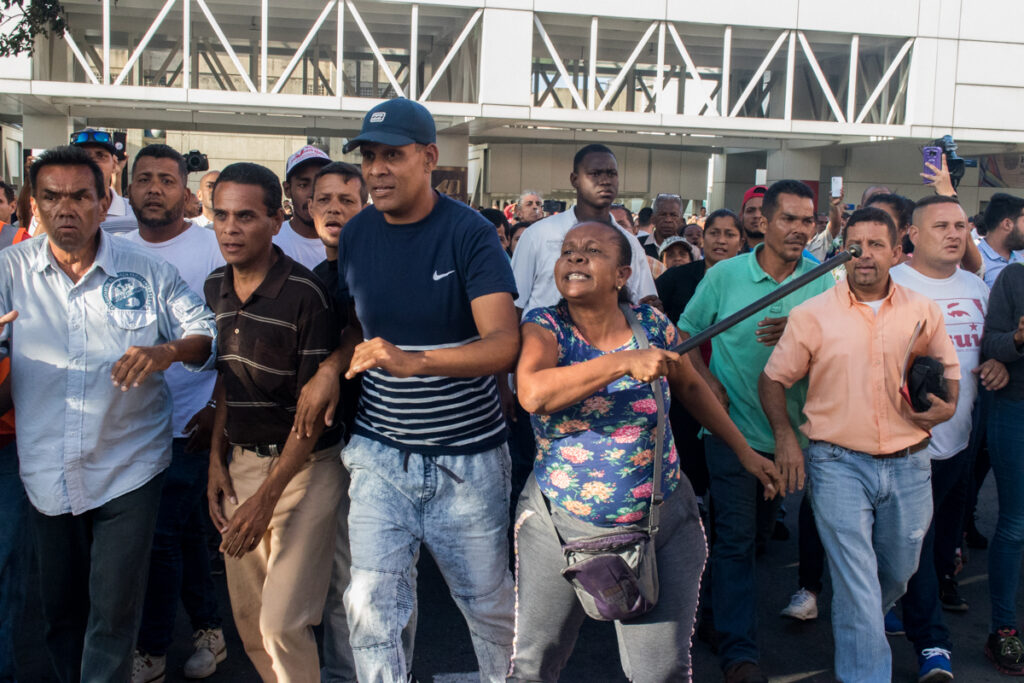 “The attacks on journalists and the media hinder the exercise of journalism in Venezuela,” says Edgar Cardenas, Secretary of the National College of Journalists. “This is part of a state policy that seeks to silence the right to information and opinion.”

The Press and Society Institute in Venezuela has registered 2,865 cases of violations against free press since Maduro came to power, including intimidation, arbitrary arrests, thefts of equipment and censorship.

The National College of Journalists accounted 179 attacks on journalists during 2019, and 114 so far in 2020. The College has documented 22 arbitrary arrests, 38 cases of harassment and 39 cases of physical violence during the first three months of 2020 that mostly took place at three political events, including Guaidó arrival at the airport.

Cardenas says that state security forces carried out most attacks in the past. Now, Chavista paramilitary groups, known as “colectivos,” often go after journalists in protests or political events. According to Cardenas, three out of four physical attacks on journalists this year have been by colectivos.

“Initially, it was very easy for journalists to detect the pro-government groups because they were wearing uniforms that indicated their names,” Cardenas says. “Today we identify them because they carry weapons and electric shock instruments. They are paramilitary groups formed and created with the clear intention of intimidating the media and their workers.”

Some attacks have taken place during legislative events. During the second ordinary session of the Assembly convened by Guaidó, on January 7, colectivos intimidated, beat and robbed journalists who covered the event. There were at least one hundred officials in attendance that day, but they did not intervene. 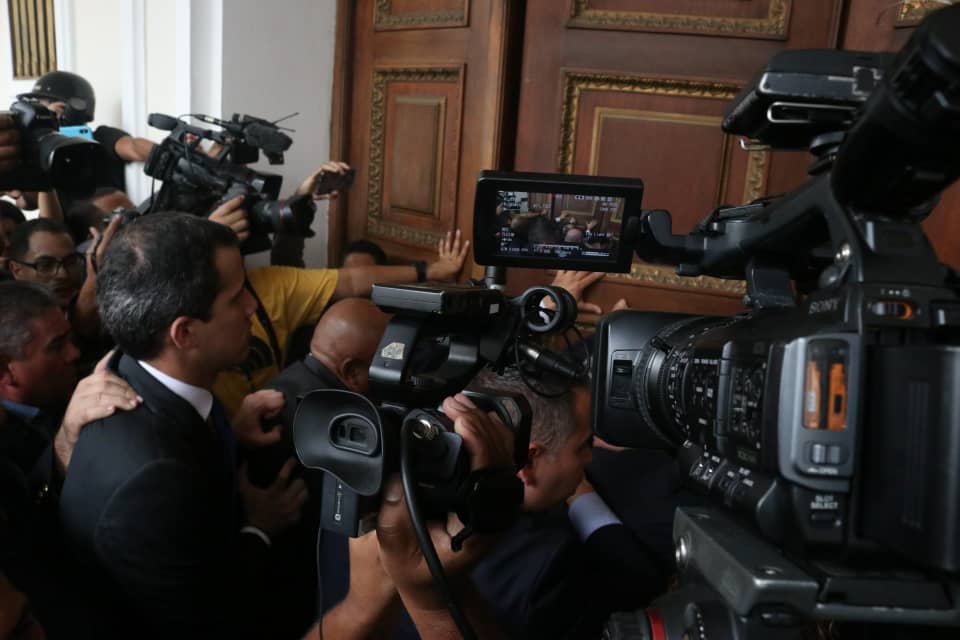 On January 5, journalists were harassed while covering a speech by Juan Guaidó at the National Assembly. Photo: Ivan Reyes.

Violations of press freedom have grown over the past 20 years. Under President Hugo Chávez, authorities started denying information at press conferences. Because they controlled the paper industry, they regulated sales to newspaper companies, and refused to renovate the licenses of radio stations. Then in 2014 ghost companies started buying traditional outlets and censoring their journalists, completely changing their editorial lines.

The coronavirus pandemic increases the stakes for press freedom in Venezuela. As of April 16, the Venezuelan government reports only nine deaths from COVID-19 and 197 confirmed cases. But the Maduro government has tightly controlled information about the spread of the virus, raising suspicions that the true number of cases has not been reported. Venezuelan journalists have questioned the inconsistencies between the number of COVID-19 cases announced by President Nicolás Maduro and by Venezuelan mayors. Freelance journalist Darvinson Rojas was released on April 2, but his detention sets a chilling precedent.

As attacks on the press have evolved, journalists promote unity and creativity. Editors dedicate more time to training their press workers how to protect themselves in conflict situations. Non-profits like Espacio Publico offer workshops on the legal, emotional, technological and self-defense aspects of journalism.

Journalists from different outlets hold chat rooms to coordinate meeting points at events and keep safe. While covering the news, reporters forget about competition and proceed guided by solidarity and collaboration.

Even now reporters help each other emotionally. Ivan Reyes commented that asking for support and talking to colleagues helped him overcome the trauma of the events on February 11.

“It is sad that we’re getting used to these kinds of events, but I think the most important thing is not letting those actions limit you to do the work,” he said.

Reyes worked through the aftermath of the attack by talking with friends and family. Reynaldo Mozo chose therapy. He doesn’t have nightmares anymore. They both continue to cover the news.

“A Venezuelan journalist’s struggle is to document the human right violation in the country,” Mozo says. “To me it is a challenge, a commitment and a calling to show the rest of the world who is suffering as the result of police brutality and bad politics.”

Seven people murdered in south-western Colombia, responsibilities are yet unclear