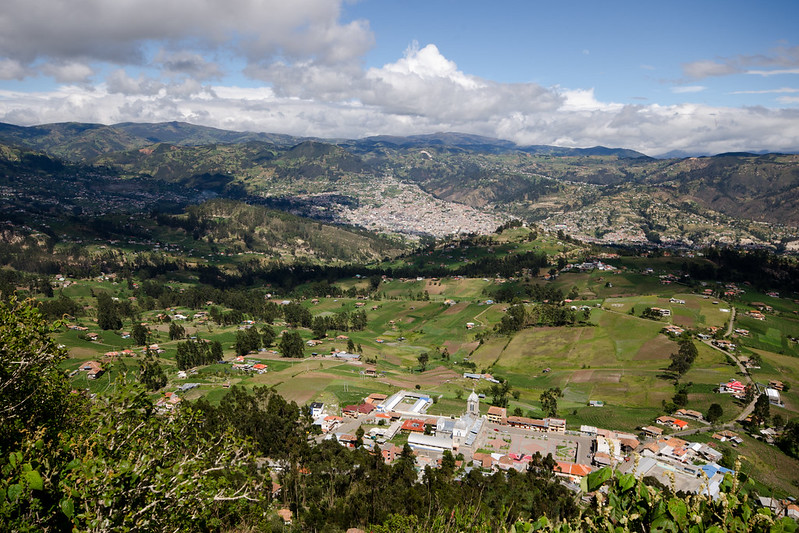 The Valley of Cojitambo, Cañar, Ecuador (Photo by Angie Drake via Flickr).

ECUADOR: Twenty Indigenous leaders from San Pedro del Cañar were granted amnesty in a National Assembly vote. The leaders were facing charges from 2015 of alleged kidnapping and extortion. All sentences will be eliminated and the defendants are expected to be released from prison immediately. The legislative body ruled that the crimes the leaders were accused of were not eligible to be tried in a court of law.

The defendants were criminalized for the practice of their Indigenous justice system. Yesterday’s decision recognized that federal law protects Indigenous peoples’ rights to make jurisdictional decisions based on ancestral traditions within their own communities.

The ruling comes after the Indigenous community Waorani won a lawsuit against the federal government earlier this month demanding that more extensive measures be taken to protect Indigenous groups against the spread of COVID-19. Leaders of the group argued in court that the government had ignored their requests for aid to combat the virus for months, leading to insufficient monitoring in the area. Indigenous communities are struggling to combat the virus because most of their lands are located far from hospitals and medical resources. There have been nearly 650 coronavirus cases and 23 deaths in Indigenous communities in Ecuador since June.

ARGENTINA: The capital Buenos Aires is expected to remain in quarantine for two more weeks after the region saw a record number of coronavirus related deaths this past week. Federal and local officials were concerned that the planned reopening would result in an even higher number of cases due to unrestricted social gatherings. The city is now expected to reopen on August 16 and will remain in Phase 3 of quarantine.

BRAZIL: Around 30 armed young men in the city of Botucatu in São Paulo state had an hours long standoff with police during an attempted bank robbery. Most of the men were able to escape the police, with the exception of one who was shot and killed. According to local news reports, the men were heavily armed in tactical gear and attempted to breach multiple banks across the city. Some residents of the city were allegedly taken hostage during the standoff, and a police station also faced gunfire. Hundreds of officers were in the city searching for the assailants on Thursday, and are expected to continue doing so today.

CHILE: Approximately three million people requested a partial withdrawal of their pension funds on the first day that the government rolled out the new program to provide economic relief for struggling families. The government’s website registered a large number of users, and hundreds of people waited outside of the Pension Funds Administration headquarters during the day. Although the process to obtain the funds can be completed online, there were reports of the website crashing after millions users logged on. Each person who applies for the program will be able to receive between $1,250 and $5,400 in pension funds. President Sebastian Piñera and his political party opposed the new measure when it was introduced in Congress.

BOLIVIA: Family members of COVID-19 patients have had to wait in lines for days to receive medicinal oxygen. Some have been seen sleeping on street corners to obtain the limited oxygen supply from pharmacies and supply stores around the country. Store managers and vendors have reportedly left some waiting for hours only to later report that the oxygen is being withheld for hospital use. Bolivia currently has more than 75,000 positive cases of coronavirus and more than 2,800 deaths. Dozens of politicians have tested positive. Eugenio Rojas, an Indigenous Congressman and leader of the MAS political party, died due to complications from COVID-19 yesterday.

PERU: The Congressional Ethics Commission will reconvene to determine whether or not members of the legislative body used humanitarian flights intended for Peruvians stranded in other countries during the pandemic for themselves and their families. Only one legislator involved in the case has openly defended the flights, stating that it is not technically illegal for legislators to take the flights. The commission will also discuss another case of a Congressman openly drinking and ignoring social distancing orders.

PUERTO RICO: Essential and public employees will be required to report to work today after Tropical Storm Isaias passed through the region. Most of the rain has stopped, but the island is experiencing flooding, causing an estimated $14 million in damage. The total is expected to increase in the coming days as rescue teams are sent to help families in need and assess the damage. Hundreds of trees have also fallen during the storm, possibly blocking vital roads and limiting transportation. Flood warnings are expected to continue for the coming days.

EL SALVADOR: Thursday marked the 45th anniversary of a massacre of university students at the hands of the National Guard. Dozens of young people died in the 1975 incident. There was a small turnout for the commemoration, in comparison to the thousands of students who usually march from San Salvador University. The 1975 massacre is considered a turning point in El Salvador’s history, marking the beginning of a long string of violent attacks by U.S.-trained forces that escalated in the country’s civil war. Commemorations to honor the hundreds of thousands of war victims have had limited capacity or been postponed due to the coronavirus.

MEXICO: Demonstrators in the town of Delicias, Chihuahua protested the country’s water payments to the United States, allegedly setting fire to government vehicles and a building. The 1944 International Waters Treaty requires Mexico to send the U.S. certain amounts of water from a shared dam every five years, but farmers in Chihuahua say they need the water for their own crops. President Andrés Manuel López Obrador is in favor of the treaty, and has said that there is more than enough water for both countries. AMLO also condemned the burning of government property. Mexico has fallen behind on water payments to the U.S. in recent years, and will have to provide approximately 128 billion gallons of water by October.

Nicaraguan bishops attempt to restart mediation between government and protesters